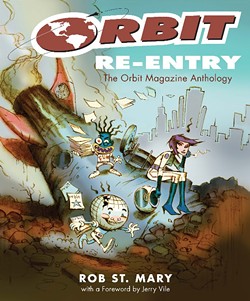 Re-Entry: The Orbit Magazine Anthology has been chosen among 20 books as part of the Library of Michigan’s 2016 Notable Books List.

The anthology, which came out in September on Wayne State University Press, compiles the history of three Detroit-based alternative magazines from punk rocker-turned-publisher Jerry Vile: Orbit, Fun, and White Noise.

The MNB list features books published the previous year, which are about Michigan or written by a Michigan author. Other selections chosen this year include Patti Smith's memoir M Train, Yamasaki in Detroit: A Search for Serenity by John Gallagher, Diego Rivera and Frida Kahlo in Detroit by Mark Rosenthal, and The People's Lawyer: The Life and Times of Frank J. Kelley, the Nation's Longest-Serving Attorney General by Frank J. Kelley and Metro Times' own Jack Lessenberry.

"The list of current and past awardees shows a great depth of ideas, artists, and history here in Michigan and it's an incredible honor to have my book selected to sit on the shelves next to them," St. Mary says in a press release. "The Orbit Magazine Anthology has been passion project since day one, and it's always great to hear the story resonates with people. It's been an honor to share the stories of Jerry Vile (Peterson) and his co-conspirators — they deserve to be regarded as the media innovators, and disrupters, they truly are."

Recently, it was announced that Orbit's mascot, Orby, would join the Detroit Historical Museum along with other Orbit ephemera.