‘Art is treated as a precious relic, but it’s really an expression of who we are,’ she said 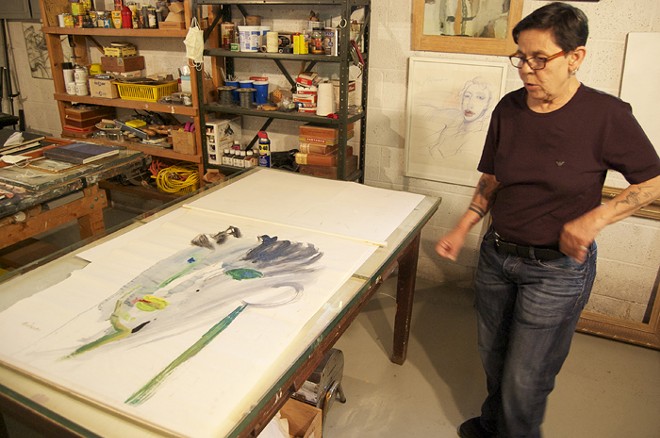 A reader tells us that local artist Monica Molinaro has died. She was 73.

That's according to Desiree’ Dragin, who says Molinaro was her aunt. Dragin says a celebration of the life of the artist is planned at the Detroit Institute of Arts.

"There will be an open mic for everyone to share stories," Dragin says. "There’s going to be many there who she’s taught and inspired. We will be playing a playlist of songs she texted to the ones she loved (over 4 hours of music she’s shared). There will be a large display of some of her best artwork she’s created over the years. My brothers, cousin, and I will be displaying a memory board."

When Metro Times interviewed Molinaro in 2014, she was living and creating artwork in her Royal Oak home studio. She studied art at what is now called the College for Creative Studies and pursued a graduate degree at Cranbrook Academy of Art, but when we interviewed her she had shifted to an almost child-like method of painting directly on paper.

"I had to unlearn everything that I learned," she said.

Molinaro said each painting took her less than 30 minutes to complete. "There are some rejects — there definitely are," she said.

She was drawn to the style because of its honesty, she said. "The reason that I like the medium that I used is because it shows all the marks," Molinaro told us. "[The painting] shows how it's made."

She added, "Art is treated as a precious relic, but it's really an expression of who we are," she said. "All of us — we're all artists."

In that spirit, Dragin says she gave some of Molinaro's art supplies to her son, as well as other artists in her family.

"My 9-year-old son always understood and greatly appreciated my Aunt's art," she says. "A short moment after I gave him her art supplies, he went to work right away and painted what he calls 'Man in the Dark.' My 9-year-old's work sort of resembles my Aunt's. It was like she was beside him guiding his every brush stroke."

Molinaro is survived by her daughter Aimee Leyva, her sister Christina, and brothers Ross and Marty.

My Aunt was the most interesting and fascinating individual I’ve ever seen. A teacher I always treasured and looked up to. The one and only person who deeply understood me. The most forgiving person I’ve ever known. The strongest person I’ve ever witnessed.

She was another mother to me.

I’ll miss her text messages, her middle of the night phone calls, her random humor, her voice, her dancing, her infectious laughter……her everything.

She was never a conventional mother. She was different. She was a free spirit. Sometimes I feel like we grew up Together because she was only 19 when I was born. We had so many crazy yet amazing experiences growing up and I wouldn’t change it for a thing. There wasn’t a day that went by that we didn’t talk multiple times a day. She was my best friend and I miss her everyday.

My Aunt was so many things to me.

She was my David Bowie. On a different level than everyone else. A living, breathing work of art unto herself. Always changing and morphing, yet always the same.

She was my Johnny Cash. Middle finger in the air to anyone who looked down on any disadvantaged person or group. A truth sayer at any cost. Unapologetically and radically inclusive.

She was my Anthony Bourdain. Always warding off her own demons to get a clearer view of the world around her. She was so fucking interesting because her curiosity and interest in others was stronger than her interest in herself.

She was and will always be my Auntie Monica.

The only one and only. Always.


And her nephew Aaron shared:

She was an amazingly talented and kind person. As a kid she would make us artichokes and would tell us “there is candy at the bottom”. I would always be a little disappointed that I never actually found any candy. It wasn’t until I was much older that what she was trying to teach us was that the heart of the artichoke is the candy. Much like life; under all the petals lies the heart and it is up to you to make your heart sweet.

This post was updated with additional statements from her family.

Monica Molinaro’s paintings are a lesson in minimalism: A few strokes of genius.