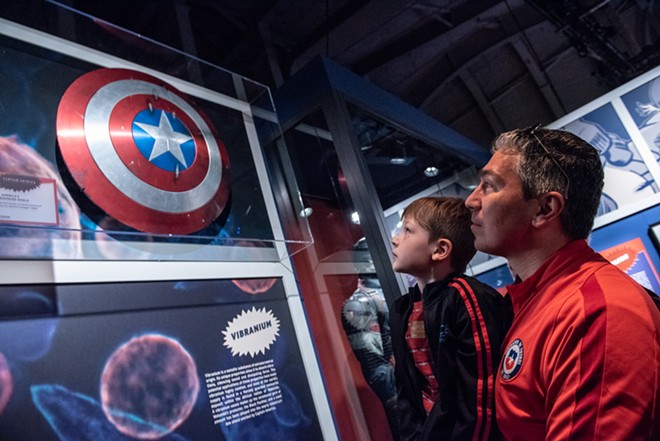 Courtesy of The Henry Ford

Big, bad, purple Malthusian Avengers-hating Thanos is no match for the latest Henry Ford exhibit, which celebrates Marvel superheroes and the people that made them. (Suck it, Thanos!)

Beginning March 28, Marvel: Universe of Super Heroes will make its Midwest debut at the Henry Ford Museum of American Innovation in Dearborn. The exhibit is the first of its kind and spans Marvel Comics' 80-year legacy with more than 300 artifacts ranging from early comic books and rare illustrations to concept art, as well as beloved props and costumes from Marvel's decade of box office domination.

“Marvel transformed the idea of the Super Hero in the 1960s — and beyond — by ratcheting up the visual spectacle, emotional dynamism, and philosophical sophistication of the action-adventure comics genre,” Brian Crosby, head of Marvel Themed Entertainment, said in a press release. “Marvel has always been a reflection of the world outside your own window and one of its most compelling messages has always been, that anyone — regardless of race, religion or gender — can be a Super Hero.”

Though a celebration of the characters, the worlds they inhabit, and how their stories have influenced pop culture, Marvel: Universe of Superheroes also honors Marvel's late creators, including Jack Kirby, Steve Ditko, and Stan Lee.

As to why metro Detroit was selected for this legacy exhibit? Well, it might have something to do with Michigan's major Marvel ties. Michigan-born comic illustrator and writer Jim Starlin created Thanos and the “Infinity” trilogy, which would become the source material for both Infinity War and Endgame. Starlin is also credited for creating Drax the Destroyer and Gamora of Marvel's The Guardians of the Galaxy, a series which he created alongside childhood friend and fellow Michigander Al Milgrom. Comic illustrators and native Detroiters Arvell Jones, Kieth Pollard, and the late Rich Buckler played major roles in Marvel comics starting in the early '70s, and artist Art Sims, also from Detroit, assisted in putting together key art for 2018's Black Panther, including concept images and the film's teaser posters.

Marvel: Universe of Super Heroes opens on Saturday, March 28, and will run through Monday, Sep. 7. Tickets ($10-$35) are on sale now and can be purchased by visiting thehenryford.org.