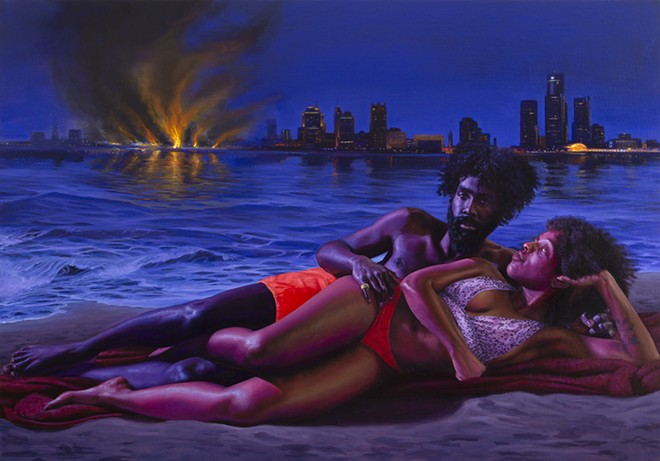 Mario Moore’s vivid paintings could easily be mistaken for photographs. Detailed wrinkles in his subject’s clothing and shadows on their faces make it seem like they’re standing in motion before you.

It’s not just the hyper-realistic pieces and painstaking detail that draw viewers into the Detroit artist’s work. With his latest exhibit at David Klein Gallery, Midnight and Cannan, Moore tells Detroit’s history as one of the last stops on the Underground Railroad that slaves navigated on their way to freedom.

The centerpieces of Midnight and Canaan focus on Lucie and Thornton Blackburn, two Black anti-slavery activists who escaped to Windsor through Detroit in 1833.

“Midnight” was Detroit’s codename, and “Canaan” was Windsor’s.

In Moore’s painting “Lucie and Thornton Blackburn’s Arrival in Midnight,” the couple lounges on a beach with Windsor’s skyline behind them as a wave rolls. Thornton places a comforting arm around his wife as she stares at the viewer, a look of frustration on her face.

On an adjacent wall, the Blackburns lie on another beach. This time night has fallen as Detroit burns in the background. Lucie looks back at the city ablaze as Thornton gazes into the viewer’s eyes. Here, they can finally be at ease.

It’s easy to find yourself lost in Moore’s fine brush strokes, missing the significance of the work, especially if you’re unfamiliar with the Blackburn Riots of 1833.

You see, the Blackburns escaped slavery in Kentucky and settled in Detroit, but were recaptured as fugitive slaves two years later. Black Detroiters who had come to know and respect the Blackburns reportedly vowed to burn the city to the ground after the couple was sentenced to lifelong bondage. Courtesy photo
"Midnight and Canaan" is on view at David Klein Gallery until Nov. 5.

Lucie escaped when a visitor to her jail cell changed clothes with her and took her place as she escaped across the border. More than 200 armed protestors came to Thornton’s aid and whisked him across the Detroit River to present-day Windsor. The unrest continued in Detroit and became known as the Blackburn Riots.

Lucie’s escape is further explored in Danielle Eliska Lyle’s film Take Flight, which is also exhibited at Midnight and Canaan. Here we see the visitor to Lucie’s jail cell, bravely sacrificing themselves so she can escape. It’s a creative testimony to the resilience and guidance of African ancestors as they impart knowledge and strength to their descendants.

Surrounding Lyle’s film are silverpoint drawings by Moore of abolitionist leaders Sojourner Truth, William Lambert, and George DeBaptiste. Behind them, maps to Underground Railroad stops like Battle Creek, Port Huron, Kalamazoo, and Indiana have been embroidered by Sabrina Nelson — another monumental Detroit artist, who also just happens to be Moore’s mother.

“This new body of work I’ve created for Midnight and Canaan challenges the viewer to consider who the Black pioneers in Detroit were before the Great Migration,” Moore said in an artist statement for the exhibition. “It asks the viewer to contemplate the challenges, stamina and willpower of Black people from the past and present within these two cities. What does the future hold for Black populations on this international border?”

It’s a good question to ponder as Moore’s lifelike pieces and Lyle’s veneration of ancestral wisdom entrance you.

David Klein Gallery is located at 1520 Washington Blvd, Detroit. “Midnight and Canaan" is on view until Nov. 5 and an artist talk is scheduled for Saturday, Oct. 29 at 4:30 p.m. For more info, see dkgallery.com.