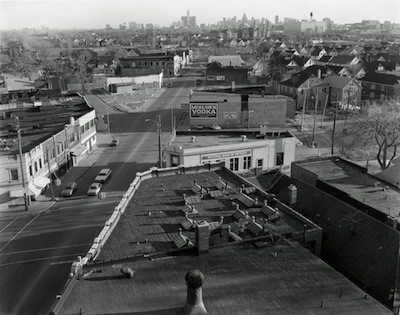 These days, when politically connected developers decide they want to demolish an inconvenient neighborhood so they can build a sprawling, single-purpose development, they have to haggle. They have to spend years assembling parcels of land. They have to woo politicians in hopes of getting government to cede tax-reverted land. They have to pay the holdouts millions for tiny properties to realize their dreams. (Hey, it's tough being a billionaire, huh?)

But that wasn't the case 30 years ago. Back then, a large corporation like General Motors could simply convince the government that it could reap an economic benefit by replacing a messy, troublesome neighborhood with a brand-spanking-new factory! Through the magic of eminent domain, the people would be moved on and the whole shebang would be bulldozed down to clear land, allowing the corporation to build its factory, all in the aegis of economic development.

And that's exactly what happened in Detroit in 1981, when the Michigan Supreme Court approved the forced relocation of thousands of residents so General Motors could build a new auto plant. According to one source's scorecard, the city evicted 4,200 residents of 1,300 homes, as well as 140 businesses, six churches and one hospital. Isn't that one hell of an economic development program?

Right there in the thick of it was photographer Bruce Harkness, who felt compelled to document the disappearing 465-acre neighborhood and the stubborn residents who clung to it. In a 2010 interview, Harkness told us: "I started photographing there in February of '81. I went over there three or four times a week, all the way until there was almost nothing left. I walked around the streets with a four-by-five press camera and a tripod, and I took over 500 pictures over the course of 11 months."

Many of those photos will be on display this week, fittingly, at the Hamtramck Historical Museum, in an exhibit called Poletown 1981. It provides a rare opportunity to see what we lost way back when, or to wonder what might have been.

Bruce Harkness
Railroad tracks and idle industry, as seen from the East Grand Boulevard bridge in 1981.