Inside the groovy redesign of Royal Oak’s Bowlero bowling alley 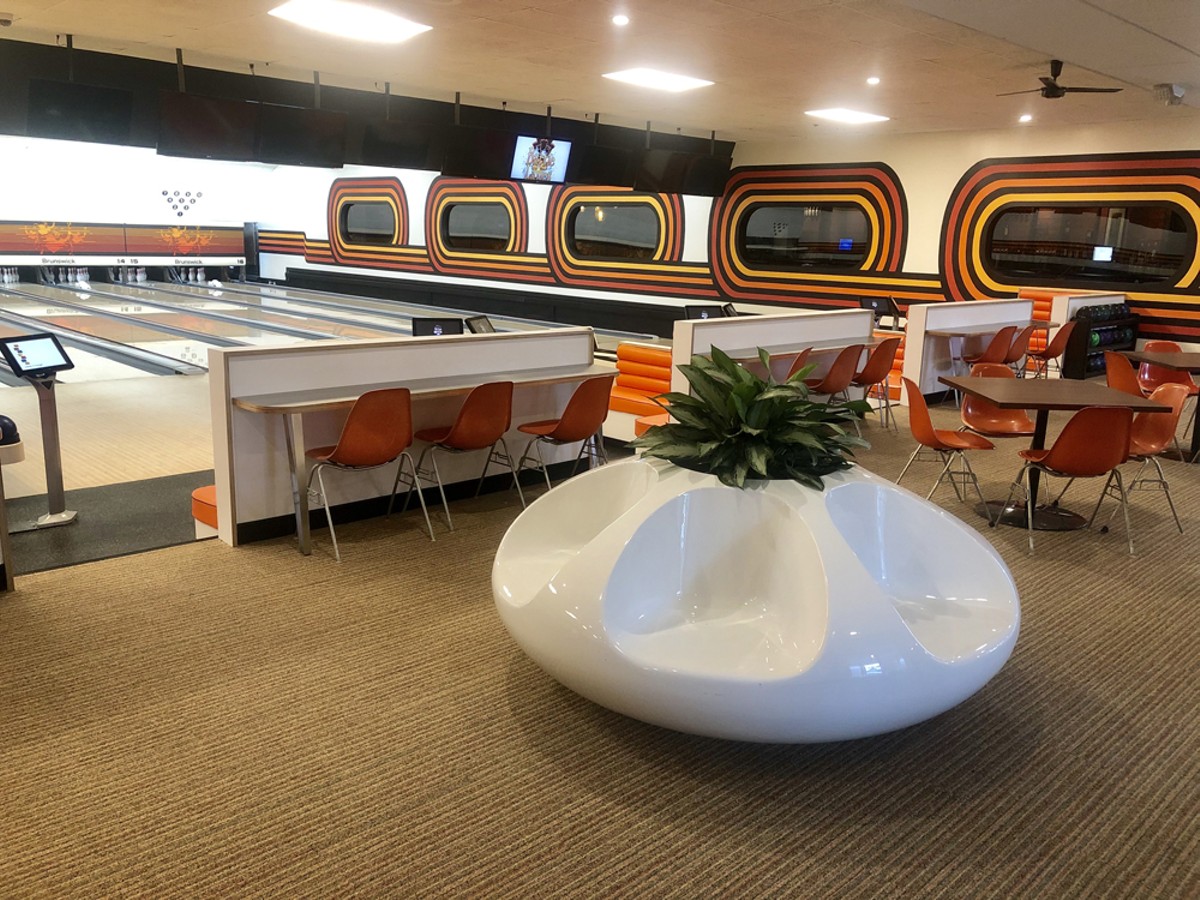 Northern Royal Oak's Bowlero bowling alley has lived a full life. More than a half-century of cigarette-smoking, domestic beer-drinking bowling leagues and piecemeal alterations had left its mark, leaving behind scuffed Formica and burn-scarred seats. But beneath the water-damaged shag carpeting and grandpa's basement-style paneling was an architectural treasure that gleamed like gold. It just took someone who could see the charm behind its worn façade.

Kelly and Dean Elliott, along with their business partner Dave Zainea of Detroit's Garden Bowl, had just the vision needed to uncover this mid-century treasure.

"The aesthetic of the [remodeling plans] is based directly upon these," Kelly says, pointing toward the plastic and decidedly '70s orange-and-black graphics that cap each lane. Kelly describes these as a "burn motif," which informed the layout and design of the remodeled lounge and alley.

Kelly says the trio's goal with the extensive remodel was to accomplish their vision while utilizing as many local resources as possible, right down to the vintage amber-colored hanging lights and other fixtures throughout the space. One glance at the original patinated orange-and-white lockers held over demonstrates that good remodeling often means retaining what works. This is "part of the authenticity," says Kelly.

Dean, an attorney, and Kelly, a school psychologist who has long maintained an interest in modernist design, clearly had a vision, but that vision would be impossible to pull off without the assistance of local designers and makers like Patrick Thompson Design, Detroit Wallpaper Company, and Advanced Plumbing. The Ferndale-based sign painter and muralist Kelly Golden, who has previously done work for Mercury Bar and John K. King Used and Rare Books, and has executed huge murals on the side of the Carhartt building along I-94 and Cass Avenue, as well as the towering 118-foot-tall Charles McGee work visible in Capitol Park.

"We did a lot of back and forth," Golden says of the collaborative design effort. "Kelly sent me so much source material. I was immersed in awesome '70s van culture."

Golden worked at night, away from the dust and clamorous sounds of the daytime construction crews. Her painting work is immaculate, made up of straight lines and stylish swoops executed in a cool-toned riot of blacks, oranges, and yellows, and it evokes a stoner shaggin' wagon sort of vibe. If you close your eyes, you can practically hear a Foghat jam playing at top-volume. When it's suggested that the design is perhaps begging for an airbrushed wizard, a paint-spattered Golden laughs and says, "Maybe if I'm here late enough one night."

Jason Huyghe, the project's lead carpenter, says he digs the "retro-funky" charms of the alley, too. He and his crew worked six-day weeks, doing everything from constructing the Patrick Thompson Design custom booths and upholstery, to an almost entirely new build on the lounge area.

The vision hasn't been without its challenges. "There's a lot of moving pieces," says Huyghe. "Some of the issues we [had] run into are some of the design ideas that sort of need to be created on the fly ... I really like the overall vision of the place now."

"I wanted it to be a certain way," Kelly says of her collaborative process. "I don't think I'm difficult [to work with], per-se..." she says, laughing.

On a recent summer evening preview of the newly completed alley, it was clear that the challenges of the rehab were worth it. In the packed '80s-chic lounge area, patrons waded two deep while one writer expected to have his astrological sign questioned. Across from the burnt-orange façade where an afro-ed DJ clad in a Funkadelic T-shirt spun disco and hip-hop, youths queued up to play pinball as the sound of ricocheting pins echoed up and down the stylized lanes.

But the renovation of Bowlero isn't just about the aesthetics; it's also about a sense of place.

Bowling alleys hold a special place in American consciousness. They have been known to play host to everything from children's birthdays to A.A. meetings. They provide a space where the American middle class can gather.

Bowlero's developers see spaces like these as an endangered species. Kelly says she's sick of the "corporatization of America" and "wants to offer something different for people looking for a family-run business, where the owners are involved in the community."

They envision Bowlero as a safe and inclusive space with an emphasis on accessibility. As such, wherever possible, the alley and lounge has been designed with an eye toward conforming to ADA compliance. That means dangerous concrete lips have been torn out, while poorly placed stairs have been relocated and ramps have been installed throughout. Sound and visual design has even been considered to accommodate autistic members of the community.

A grand opening is slated for the last weekend of August.