How Sam Richardson and Tim Robinson made ‘Detroiters,’ a TV comedy about Detroit, for Detroit

Sister, Sister. Home Improvement. Martin. Freaks and Geeks. All of these sitcoms were set in metro Detroit, but you might not even know it had it not been for an aerial shot of downtown after the opening credits rolled, or small plot points like Tia and Tamera Mowry's characters on Sister, Sister attending college at the University of Michigan.

And while Detroit is well represented in other areas of pop culture, it is a bit lacking when it comes to television. Up until recently, the only semi-popular TV shows set in Detroit in the last 10 years were Detroit 1-8-7, a cop show that only furthered the narrative that Detroit is just a city full of homicides and crime, and Undateable, a half-hour comedy on NBC that could have been set in any U.S. city.

That all changed with Detroiters — created by Tim Robinson and Sam Richardson, two veterans of the Detroit comedy scene, along with comedy writers Zach Kanin and Joe Kelly. The show debuted in February of last year, and was renewed for a second season, which premieres this week.

The germ of what would become Detroiters goes back to the now-defunct Second City Detroit (the venue closed in 2004; it's now City Theatre), long before comedy titans Lorne Michaels and Jason Sudeikis agreed to executive produce the show. That's where Richardson, then an aspiring comedian, took classes from Robinson. Little did they know that they would forge a friendship that would last years and inspire their own TV show.

"Tim and mine's stories are basically the same," Richardson says in a phone call with the duo. Richardson graduated from the city's University of Detroit Jesuit High School and Academy in 2002. Meanwhile, Robinson graduated from high school in the suburbs, from Clarkston High. The two went on to perform at Hamtramck's Planet Ant Theatre, and eventually wound up at Chicago's Second City around the same time.

The bromance continued, even after the two found national success. Robinson spent time as a featured cast member and writer on Saturday Night Live, while Richardson joined the cast of Veep as a delightful yet socially awkward White House staffer named Richard, where he worked alongside Julia Louis-Dreyfus — a dream job for most comics.

With their own personal success steadily climbing, the two say they wanted to shine the spotlight on their hometown.

"I can remember being backstage with Sam before shows in Chicago and just thinking how cool it would be to have our own TV show and how much we wanted to bring it back to Detroit," Robinson says. "But that was always [a] pipe dream. Then the actual opportunity came up and we were just like, 'Shit, let's do it.'"

The show follows Sam Duvet and Tim Cramblin, two ad agency guys that are basically just heightened versions of Richardson and Robinson. In the show, Sam and Tim are best friends, brother-in-laws, and neighbors who do literally everything together. Their ad agency, handed down from Tim's father, specializes in corny, low-budget yet memorable local TV commercials — inspired by real-life commercials from the Detroit area in the '80s and '90s, like Mel Farr "your superstar dealer," Dittrich Furs, and D.O.C.'s "Sexy Specs" campaign.

"I mean, how can you not forget some of those commercials?" says Robinson. "They are classics."

"Because we shoot the show in Detroit, some people on our crew were crew members and shot those commercials from back in the day," adds Richardson.

If New York City was the fifth cast member of Sex and the City, the Motor City is the third cast member of Detroiters. In the first season alone you'll recognize the People Mover, the DIA, London Chop House, and countless more Detroit landmarks. In the show, Sam and Tim drink Vernors religiously, they eat coney dogs for breakfast, and even come up with their own Detroit-themed T-shirt a la "Detroit vs. Everybody" and "Detroit Hustles Harder."

Other situations or references are so Detroit-specific that they'll likely be missed by people who have never lived here. In one episode in season one, Sam is hilariously mistaken as a prostitute by a high-powered woman modeled after former City Council member Monica Conyers.

"We were a little worried that some Detroit-specific jokes were going to go over people's heads," Richardson admits. As one example of them toning it down, coney dogs are only referred to simply as "hot dogs" in the show.

There's other Motor City-centric gags, too. Every time Sam or Tim watches the news, former WDIV newscaster Mort Crim shows up to read the fake headlines in his signature baritone. People watching the show anywhere that is not Detroit might just assume that it's an actor playing a newscaster, but Detroiters know that Crim is a real person and a living legend. That's what makes watching Detroiters so much fun — we're in on the joke.

And the show can get topical. In one season one episode, Sam and Tim discover while using the bathroom on the vacant floor below them in their office that a super-hip tech company from out of state is taking over the space, with the clichéd attitude that they're going to "save Detroit" simply by moving there. This causes Sam and Tim to spiral into a gentrification-induced anxiety attack, as they soon realize that their beloved Detroit is being taken over by millennials and rolling peddle bars filled with people from the suburbs. The story arc mirrors the real Detroit, which has changed rapidly in recent years since Dan Gilbert relocated Quicken Loans' headquarters downtown in 2010.

"We really didn't mean to make an episode like that, but every time that we would come home and visit, something about the city had changed," Robinson says. "Whether it was a new restaurant or a new business, something is different."

Of course, you don't need to be a Detroiter to appreciate the show. Beyond poking fun at Detroit, Robinson and Richardson flex plenty of other comedic muscles. The two are fantastic physical comedians, as seen in the first episode, where they take a ton of diet pills from the '60s that they find in an old desk at the office that basically work on them like speed. What results is a Don Draper-level brainstorm session where Sam and Tim start throwing objects at a thick piece of glass in the office, determined to make it shatter. The trailer for season two features not one but two vomit jokes.

A crash course on the Motor City

If one wanted to learn about Detroit pop culture, they could do worse than binge-watch the first season of Detroiters. At least that's the position comedian and podcaster Seth Resler found himself in when he started the Detroit vs. Detroiters Podcast, where he recapped each episode alongside fellow comedian Mike Geeter.

"The show's a big love letter to Detroit," says Resler, who moved to Detroit three years ago from the California Bay Area. "I'm not entirely sure how much sense the show makes if you're not from Detroit, because there are a lot of Detroit references. And that's what our podcast essentially became, and we didn't even know that when we started. It became this decoder ring where I would play the new guy and Mike would play the guy who grew up here and he would explain all the references to me that I didn't get."

Resler notes that the show signals its relationship to the city it's set in to a much higher degree than most other shows. "Cheers was pretty Boston, but not the way this is," he says. "I don't know that Frasier was ever really Seattle the way this is." He says he also noticed that Detroiters represented Detroit differently than other films set in Detroit. "When you compare it to movies — it's 8 Mile, The Crow, RoboCop. They're all pretty bleak depictions of Detroit. So this is much more positive."

In the end, Resler says the show helped him appreciate his new home. "It honestly made me like the city a lot more," he says. "I learned an insane amount about the city of Detroit in a short period of time because these guys crammed so much of Detroit into the show." 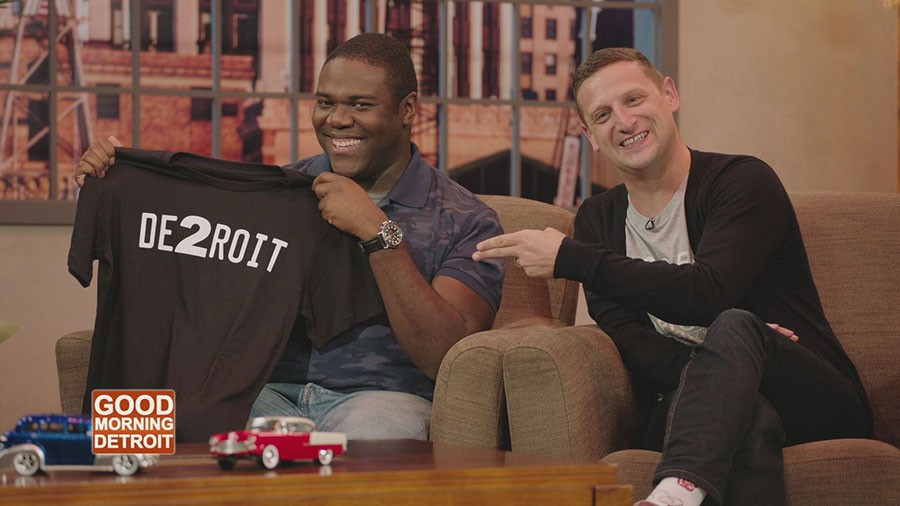 Creating a TV show so deeply rooted in the city where it takes place is a daunting task, and Robinson and Richardson say they felt like they had an obligation to the people of Detroit to get it right.

It helps that plenty of the show's cast and crew call Detroit home themselves, and Richardson and Robinson have used it to invite ex-pats back to the city. That includes fellow metro Detroit native and Second City alum Keegan Michael-Key, who shows up as a prospective client for Sam and Tim. "A lot of the people on the cast are like our friends from back in the day, or they are actors who lived here and now live in L.A.," Robinson says.

"It's really fun for them to come home and shoot the show because they get to visit family that they may not have seen in a while, or just see how the city has changed so much," adds Richardson. Other locals include actress Lailani Ledesma (who plays the character Lea) and Christopher Powell (who plays a security guard).

By all accounts, it appears Richardson and Robinson are set to cram even more references into season two — Detroit locales set to be featured include showing Sam and Tim spending the day at Belle Isle, throwing some footballs at the fowling warehouse in Hamtramck (which will surely deeply confuse the rest of America), and pitching to executives inside the offices of Little Caesars.

"We are so lucky that we got to shoot a second season, and we really just wanted to tell these characters' stories and show again how cool of a place Detroit is," Richardson says.

"It's a dream come true that we get to make this show in our hometown, about our hometown," adds Robinson. "Not many other comedians get to do that."

Detroiters premieres Thursday, June 21 on Comedy Central, with back-to-back episodes at 10 and 10:30 p.m. The following week, the show will move to its regular time at 10:30 p.m. on Thursdays.