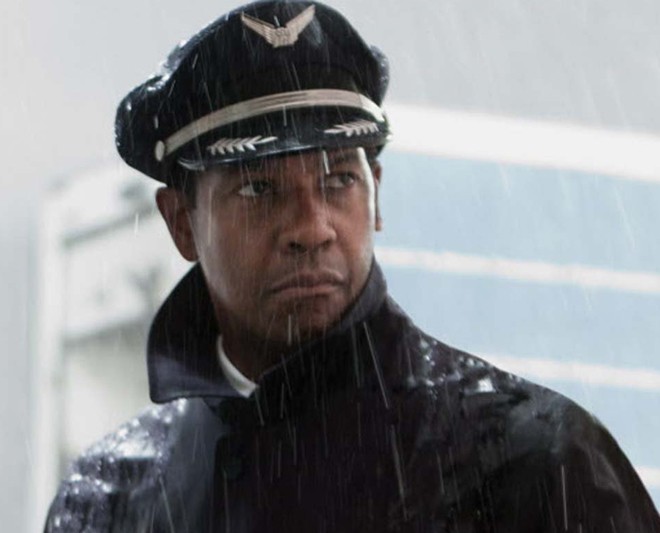 Denzel Washington cranks up his patented intensity in Flight, delivering lingering stares that seem likely to burn through the aviator lenses his strung-out pilot character routinely dons to navigate hangovers. Washington's Captain William "Whip" Whitaker is a commercial sky jockey of such immense skill and confidence that he never loses his cool behind the controls of a jet, even though his private life has long since crashed and burned.

Wrecked after a late night of booze, blow and banging a comely stewardess, Whip enjoys a little tail of the dog, then drags his carcass out of bed to perform a quick, seemingly routine jump from Tampa to Atlanta, a flight that just so happens to run right through the path of a raging thunderstorm. With the help of some tiny vodka bottles and a bit of orange juice, Whip cruises right through the choppy skies with aplomb, but even his smooth hands can't prevent the massive mechanical failure that comes next, a glitch that triggers what may be the most convincing, thrilling and profoundly terrifying plane crash in movie history. While the co-pilot and flight crew are understandably freaking out, Whip stays as cool as the other side of the pillow, and performs a series of inventive, borderline crazy maneuvers that manage to bring the plane down in an empty field, mostly intact.

On the ground, Whip's mid-air heroics are hailed as nearly miraculous, though there were a handful of casualties and the nagging issue of a damming toxicology report to deal with. In the hospital, he meets a lovely, deeply wounded junkie (Kelly Reilly) who is exactly the sort of broken toy that other addicts gravitate to playing with, and soon she's deep in Whip's co-dependent downward spiral. Now the challenge for our decided anti-hero is to find a strategy to confront the prosecutor's office, the federal investigators, the ravenous media and his estranged family, all while struggling to kick all of his nasty, destructive habits.

Washington is up to the task, layering on complexity and never deviating from the course, even as the script by John Gatins (Real Steel) grows wobbly amid the actor's turbulent performance. Washington also gets assistance from a stellar supporting cast, all of whom sink their fangs into the meaty scraps handed them. As Whip's old Navy buddy and current union rep, the marvelous actor Bruce Greenwood speaks in a deep, soothing Southern drawl that sounds like the purr of a contented tabby. A razor-thin Don Cheadle is excellent as a brutally efficient attorney, and John Goodman is a hilarious, burly tornado of excess as a charmingly roguish drug dealer.

Director Robert Zemeckis returns from the wastelands of motion-capture CGI animation, where he's been wandering for the last decade with varying results, and jumps hip deep into a high-stakes drama for grownups. The opening scene, with full frontal nudity and drug abuse, appears to be a declaration of principles, but Zemeckis doesn't stay the course all the way through. For a good amount of the running time, Flight seems like it will remain the rare example of a popcorn picture that treats its lead character as a fully formed, complicated and deeply flawed adult, but there is a late-breaking move toward sentimentality and spiritualism that breaks the faith of what has come before.

For all his technical dexterity, Zemckis' vision remains frustratingly earthbound; his mind is open to innovation, but his soul is decidedly mainstream. Not that there is anything wrong with that. This is the guy who gave us Back to the Future after all, but also the guy who brought us Forrest Gump, and his tendency towards rote, mini-mall Bible-belt morality begins to drag the picture down. Zemeckis also indulges in some classic rock music cues that are borderline criminal. Can we please retire "Sympathy for the Devil" and most of the Stones catalog? It's been done to death.

For all its shortcomings, Flight still has the incredible force of Denzel Washington to its credit. He holds the film together with sheer willpower and captivates us with his performance, even long past the point the character and the film have exhausted our patience.