A five-year labor of love, Keanu Reeves acts and directs in this updated version of 1970s-style martial arts action flicks. 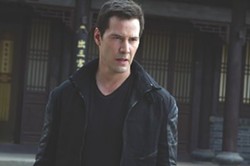 Keanu Reeves’ stiff monotone performance makes one ask if he is even ‘acting’ in this movie?

There’s a ripe irony to Keanu Reeves’ homage to — and update of — 1970s-style martial arts films. Casting himself as the villain, his stiff monotone performance recalls the awkward line deliveries of Asian stars Bruce Lee and Sonny Chiba as they were forced to act in scenes that didn’t involve them flipping, kicking and punching. Perhaps it’s a sign of China’s rising dominance in the world that here, martial artist Tiger Hu Chen does the heavy lifting as both actor and action star.

Or maybe it’s a put on. There’s something subversive about an A-list American star playing the bad guy in a Chinese-language movie. Perhaps Reeves, who is smarter and more talented than his critics often give him credit for, is parodying the badly lip-synced villains that populated films like Game of Death and The Street Fighter.

While the actor has always been cursed with a limited vocal range, he’s never had problems expressing both warmth and personality in past roles. In Man of Tai Chi, however, he’s a soulless, dead-eyed capitalist, his sneering rage coiled into corporate entitlement. Seen from a particular angle, his performance could be interpreted as a sly rebuke, the flipside to the casual yellow menace racism that finds its way into so many Hollywood films.

This choice contrasts nicely with Tiger, whose naive working-class fighter finds action and aggression come far more easily than spiritual contemplation. Young and determined to prove Tai Chi is more than just a serene exercise in moving meditation, he moves into the corrupting orbit of Donaka Mark (Reeves).

Stuck in a dead-end job and unable to save his master’s temple from ruthless developers, Tiger agrees to join Mark’s underground fighting circuit for cash. Facing off against a wide range of opponents and combat styles, his Tai Chi becomes a unique fighting asset. But the matches not only put his honor in jeopardy, they reveal more sinister aspects to Mark’s operation.

There are enough philosophical theatrics to separate Man of Tai Chi from your average chop-socky action flick, but mostly it’s just a well-made update of genre conventions. It make sense that most of Cooney’s résumé is filled with videogame script credits.

Where Reeves distinguishes Man of Tai Chi most is behind the camera. The fight scenes are exciting and plentiful, acting as a showcase for both Hu Chen’s formidable talents and Matrix alum Yuen Wo-ping’s inventive choreography.

With skill, pacing and a good eye for composition, Reeves captures the escalating intensity of the fights, keeping them compact and brutal — all while highlighting Tai Chi’s swift and sweeping movements. This is no small feat given how few Hollywood directors know how to shoot action sequences, opting for noise and bombast over grace and coherence.

The biggest complaint comes in the third act, when The Raid’s Iko Uwais shows up; only to have his confrontation with Tiger aborted moments after it starts. Reeves squanders the opportunity to showcase what is arguably the most exciting martial artist to come along in years.

Things don’t improve after that. The finale is an awkward confrontation between Tiger and Mark, punctuated by a series of false endings. The introduction of some hokey martial arts mysticism doesn’t help.

A five-year labor of love, Man of Tai Chi demonstrates that Reeves understands how to match his cinematic passion to the realities of the international box office. It’ll be interesting to see what he does next.

Man of Tai Chi is in theaters now and is rated R with a running time of 105 minutes. (In Chinese and English, with English subtitles.)