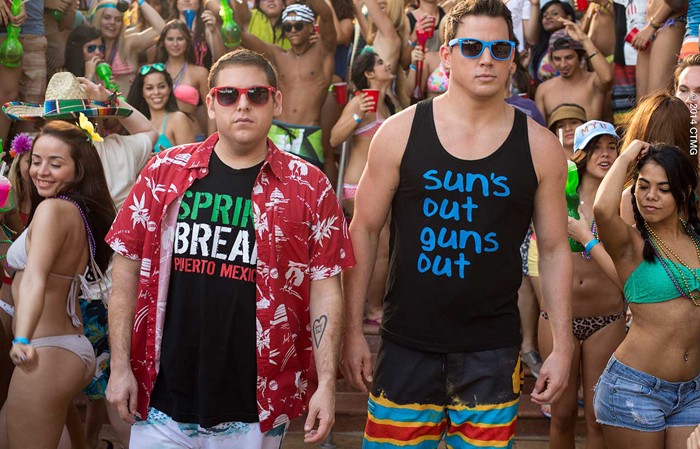 When faced with producing a pointless sequel to the needless re-imagining of a late ’80s cop show that was itself highly derivative of the late ’60s cool kids artifact The Mod Squad, it’s probably best to just come out and admit that the product is creatively bankrupt.

22 Jump Street is a surprisingly energetic, often hilarious, and largely engaging buddy cop comedy precisely because it embraces its own obvious absurdity.

Jonah Hill and Channing Tatum are back as Schmidt and Jenko, partners that are physically mismatched but who are soulmates in blunted emotional development. After the success of their undercover infiltration of a high school drug ring, this goofball duo proves a little less than stellar at regular police work. When an attempted dockside smuggling bust turns into disastrous slapstick fiasco, it’s an opportunity to not only advance the plot, but to comment on increasingly expensive elaborate summer action spectacles.

Their embarrassing failure lands our bad boys in Deputy Chief Hardy’s office, where Parks and Recreation star Nick Offerman is on hand to shoulder the burden of exposition.

With tongue scraping the edge of his cheek, Offerman scolds the lads, claims their antics have already put the department over budget, and if they want to keep their jobs, they’ll have to return to the formula and do exactly what worked the first time. And he means exactly. No longer able to pose as high school heroes, Schmidt and Jenko are dispatched to nearby MC State, where they’re tasked with discovering the source of a dangerous new designer drug and, in essence, mirroring the plot of the first movie.

On campus, the strangely matched BFFs slowly begin to revert to their natural roles, with the beefy Jenko fitting in with the jocks and the nerdy Schmidt slipping into the art crowd. Clichés abound: Tatum impresses the frat bros by opening beer bottles with his eyebrows, while Hill charms the ladies by performing a routine at a poetry slam that’s so idiotic, it serves as pitch-perfect parody.

Have we seen variations of these same bits before? Of course we have, but here the devil-may-care charisma of the leads helps sell the stale material. The screenwriters are fully aware that nobody really cares about the police work in a comedy; at one point a suspect actually reveals that the mysterious tattoo on his bicep is of an actual red herring. Directing tandem Phil Lord and Christopher Miller (who also helmed 21 Jump Street) have perfected this sort of self-referential spoofing, and, in market-minded 21st century thinking, have turned it into a brand with this year’s earlier surprise hit The Lego Movie. Winking at the camera is an old standard, but in the modern tone of constant social media snark, it helps to double down and make a comment on your own commentary, and the post-credit sequence here smartly promises sequels on top of sequels into forever.

22 Jump Street is rated R, has a run time of 112 Minutes and is in theaters now.