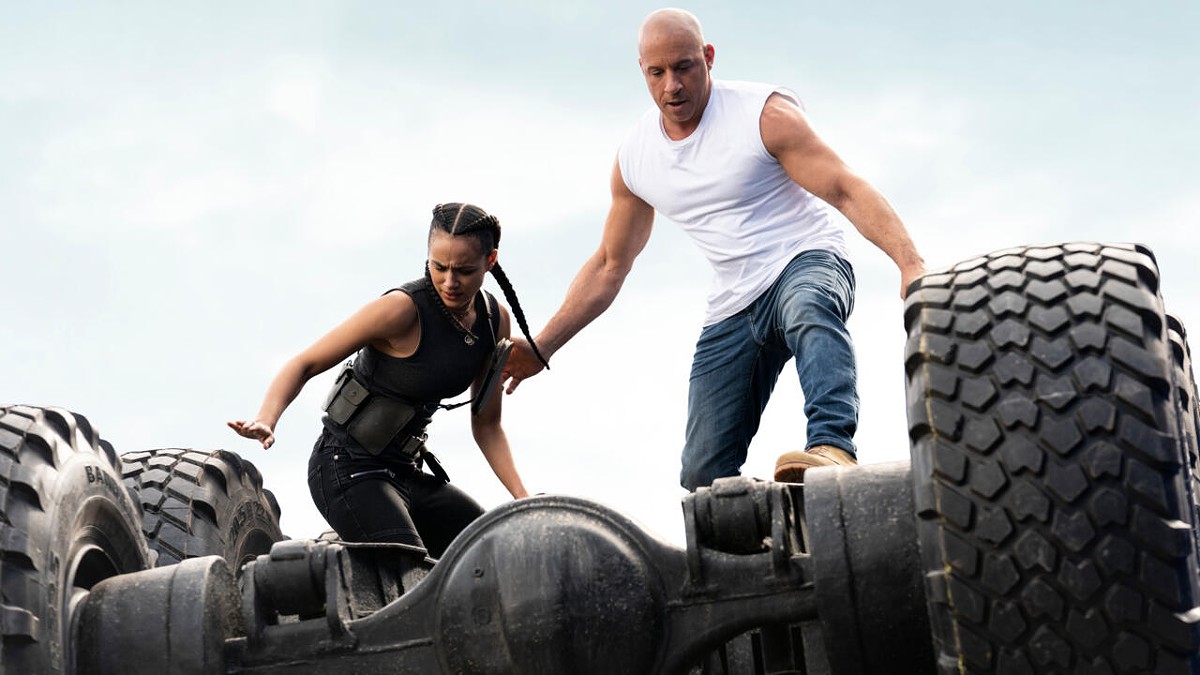 Tradition is tradition. At times, it seems like that's the only thing keeping franchises alive these days. Now, the newest Fast and Furious movie has arrived. Settling into a seat for F9 (my first movie in theaters since the pandemic started) brought about a certain sense of comfort. While the word normalcy is a loaded concept at this point, it was a relief to be seeing a movie I only kind of wished to see in the ideal and only way I'd really want to.

That glow lasted through a fair chunk of this installment, which finds the series' patriarch, Dominic "Dom" Toretto (Vin Diesel), and his wife, Letty Ortiz (Michelle Rodriguez), yanked from a quiet life on a farm with their son for a one-last-hit style escapade; what they were growing there, if anything, is anyone's guess. In their opening mission, they're sent to recover a potent, world-threatening hacking device called Ares — or else. As one of the film's modest sum of three MacGuffins (about 1.25 per hour), this serves as an excuse to catapult Dom and most of the old cast to a Central American rainforest, where they race through not just the understory but a literal minefield, with Roman (Tyrese Gibson) forced to careen through thickets at high speeds without working brakes. Evoking Speed while nodding to the wooded bike-chase scenes from Star Wars and even William Friedkin's much more existential slow-burn Sorcerer, series mainstay Justin Lin directs these scenes with some economy and rough intensity but no real beauty — which suits the project at hand just fine. Gradually one-upping himself without lingering on much, the scene's hearty yet breezy. It's easily appreciated on modest terms and decently, knowledgeably made — like a pot roast.

It's not long after, though, that the film starts tying itself into knots. Leaning hard into extended flashback scenes involving young Dom (Vinnie Bennett) and his brother Jakob (played in present by John Cena, in flashback by Finn Cole: the kid's a tough sell), Lin imperils the film's forward movement with these callbacks to their youth, which double as nostalgic excuses to recall, however imprecisely, the tone, fashion, and milieu of both the series' and millennium's early days. Needlessly detailing the brothers' shriekingly unconvincing rivalry and present-day estrangement stemming from questions around their father's death on a racetrack, these and other flashbacks, callbacks, and cameos — which recall characters and moments from past decades in varying ways — prove a real pox on a film that ought naturally to cherish a sense of momentum. With the screenplay contorting itself into grotesque shapes to be sure viewers are strongly encouraged to revisit old installments while nearly forbidding them to accept that people, characters, or actors can leave or die as happens in real-life families (the series' late Paul Walker being excepted), F9 seems to be constantly working to resuscitate itself as a franchise when it could simply live, breathe, and drive ahead — as a film. This unwillingness to simply proceed, probably in the name of building groundwork for upcoming spinoffs, hampers Lin's more generally competent direction of action and dims the work of a rich stable of performers, making it tough to enjoy what should be a pretty simple story to nail.

Despite these drawbacks, Cena — like much of the sprawling cast — outperforms both the script given him and the demands of the film. As Jakob, Cena provides a hulking physical counterpart with an at times frailly macho air of emotional opacity, striking a pointed contrast in rivaling Dom's mantric, sentimental, and quasi-religious invocations of family. With his magnificent underbite, severe slicked haircut, brooding scowl, and notable lack of emotional ties, Jakob serves as a roaming agent set upon — childishly — proving himself against Dom, an unsettling contrast with Cena's carriage and appearance at 44. Speaking from a glass cell, Charlize Theron's sneering Cipher (reappearing for what looks like a single studio-bound shooting day) makes barbed, questionable remarks about Jakob's features and genomic lineage, suggesting he's of Scandinavian descent (he and Dom have different mothers), and drawing out a thread in F9 of blond-ish, privileged, European-looking villains antagonizing Dom's multiracial crew of self-starting expert underdogs. Exemplified most plainly in Otto (played by Danish actor Thue Ersted Rasmussen), a flamboyantly snotty prince of a man who directs Jakob as his instrument, F9's posh antagonists strike a pointed contrast with Dom's crew, many of whom began their careers hacking computers or boosting cars as independent agents — and have worked both with and against (or in spite of) state authorities.

In this, as in other chapters, the series' racial and global politics remain complex; within the franchise's messy confines, they're likely irresolvable, a set of realities Daniel Casey's script seems to tune in and out of. For every frank, even observant line about racial reality in the present, there's a countervailing moment in which Black performers are sidelined, confined into roles where they provide wisecracking comic relief in a way that feels out of date: a tradition, yes, but one that could stand to be broken. Likewise, scenes connoting James Bond-style, globe-trotting imperialism, taking place with American agents barreling around Georgia (the country) or Japan are massaged into a kind of power balance with others that take place in London and Edinburgh. From the farmhouse scenes to Dom's sleeveless workvest, the film makes intermittent appeals to scrappy, blue-collar ways of living that prove refreshingly free of white supremacist overtones, raising questions nonethless. Who Dom's crew serves (America, existing power structures) as they trot the globe and, by F9's end, launch into space, is a going question — for these are imperialist traditions. Is Dom's crew a servant, or agent, of the little guy or of the big, and here shallow-seeming American state? With its Corona product placements, backyard barbecues, and dinner table blessings, the answer here seems to be that it's a bit of both. But this tension's mere presence in a blockbuster like this one (particularly compared with its peers) gives it an ability to get, perhaps unwittingly, at both how currents of power operate in the world and the limitations in how they're understood — and so proves more enlivening than damning. But the only virtue to be had in making movies lies not just in doing things but in doing them well — it's all that makes them worth the drive.