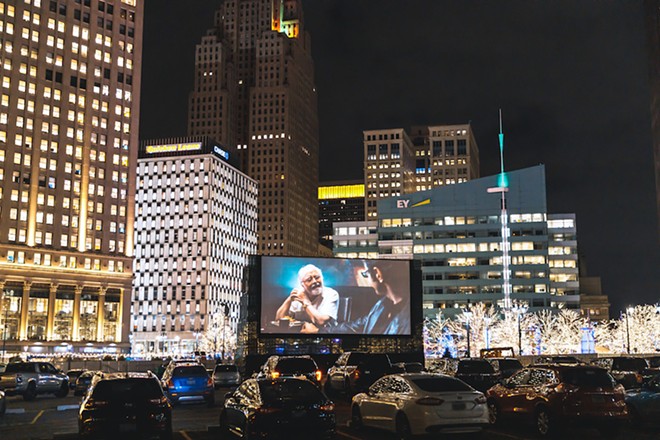 Sequels are not always as good as the original, but a seasonal drive-in theater located in downtown Detroit is upping the ante for its own part two.

Earlier this year, Emagine Entertainment partnered with Bedrock to bring a temporary drive-in movie theater to the site of downtown Detroit's delayed Monroe Blocks project at 32 Monroe Street, and kicked off their screenings with the dino DNA-packed Jurassic Park. Then in the summer, the site pivoted to Monroe Street Midway, an outdoor roller-rink and basketball courts designed by Detroit artists.

Starting Friday, Nov. 12, the Monroe Street Drive-in's 60-by-32-foot digital screen will, once again, feature family-friendly films, with screenings on Thursday-Sunday through spring of 2022. Showtimes will be released on a weekly basis and viewings are $20 per car.

According to organizers, during its initial run, the Monroe Street Drive-in saw 1,500 cars roll through.

Detroit artist Sheefy McFly was once again tapped to create a new design for the space.

"I’m honored to design another installation at the Monroe Street space! I have such a connection to this area since the creation of the Rollout Detroit Roller Rink this summer," McFly shared in a press release. "I am excited to watch it evolve through the fall and winter seasons. I promise to beautify the space as abstract and Detroit as I possibly can, and I can’t wait to watch my hometown connect to it."

In addition to offering "all of the amenities guests have come to love about an Emagine showing," including concessions, interactive lighting, state of the art audio and visual technology, as well as warming areas, restroom trailers, and pedestrian walkways, the drive-in will introduce open-air seating pods for guests who wish to view the film from outside of their vehicle. Per a press release, there are nine pods that can accommodate 2-4 guests each and are available on a first-come, first-served basis. They are also free of charge.

The drive-in is an extension of the "Decked Out Detroit" initiative, a partnership between Bedrock, the Rocket Community Fund, and the City of Detroit which aims to attract visitors during the pandemic by offering heated outdoor dining options and complimentary parking.

For more information as well as showtimes, see emagine-entertainment.com.