The CCS and Charles H. Wright collab takes a stand on climate change and sustainability Back in 2018, the Charles H. Wright Museum noticed three dying Zelkova trees on its campus. Instead of cutting them down and sending them to a landfill, students at Detroit’s College for Creative studies used them to make everything from abstract art to a fully-functioning record player.

The repurposed art is now on display as part of the d.Tree Studio Exhibit, a collaboration between the museum and CCS. It’s on at the school’s campus until Saturday, April 2.

d.Tree Studio is a new course at CCS that focuses on reusing natural resources like the Zelkova trees to highlight issues like sustainability and climate change. Twelve artists spent 15 weeks in the program meticulously breathing new life into the trees.

You would never guess that many of them had no prior woodworking experience, based on the concepts and level of craftsmanship displayed in the room. In an artist statement, Serio says, “I deconstructed the traditional European influence of chess to address the imbalanced power dynamic and created rules based on a collaborative process that revolves around community, liberation, and humility as opposed to dividing, conquering, and dominating.”

Jasmine Brown, another artist featured in the show, fashioned the tree bark into a basketweave to symbolize how humans conform or “bend” to social influences. Though the bark has been shaped into something else that it’s not, it’s still tree bark — the same way our true authentic selves lie beneath the facades we show to the world.

Other artists made mirrors, abstract furniture, and yes, an actual record player that works. While the artistry of the show is impressive, there’s a much more important conversation happening here. 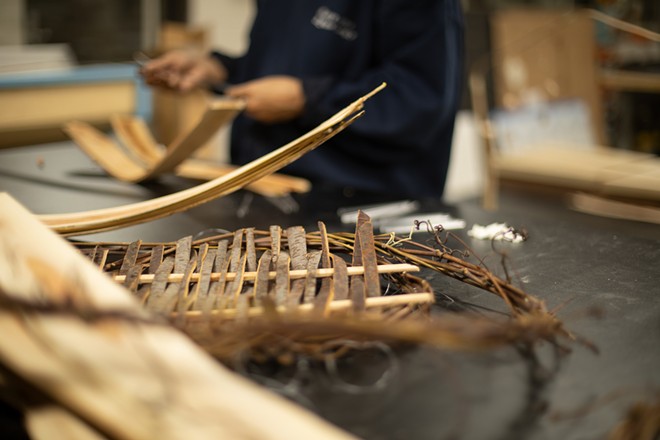 “How do a museum and an art school kind help with that awareness and what is the role of the artist and maker in these conversations?” she asks. “Just actually saving the wood is helpful to climate change because of [carbon sequestration]. Since we saved it instead of burning it or mulching it, it doesn’t release carbon dioxide into the atmosphere.”

Between 10 and 20,000 trees get cut down and discarded in Detroit every year, Ian Lambert, CCS dean of graduate studies and research, tells Metro Times. Lambert also taught the d.Tree Studio classes.

Throughout the program, students met with local elders, urban planners, and other artists — like Olayami Dabls, this year's Kresge Eminent Artist award winner — who they drew inspiration from in creating their stories. d.Tree also hosted a “Treeposium” during the 2021 Detroit Month of Design to further the environmental discussion.

“We wanted to try to avoid having people just make cutting boards,” Tom tells Metro Times. “These tree are special. They came from the Wright museum, so the idea was more ‘what did Detroit trees see.’ We wanted to try and ground this with the wisdom of trees through people, place, and history.”

Even with the huge projects that each student made, there is still plenty of wood left for the d.Tree Studio program to continue next year.

The d.Tree Studio Exhibit is at the CCS Center Galleries located at 201 Kirby St., Detroit. More information can be found on the program’s website, dtree.me.