Robert McTyre Jr. bought a one-way ticket to California that took 12 years to pay off 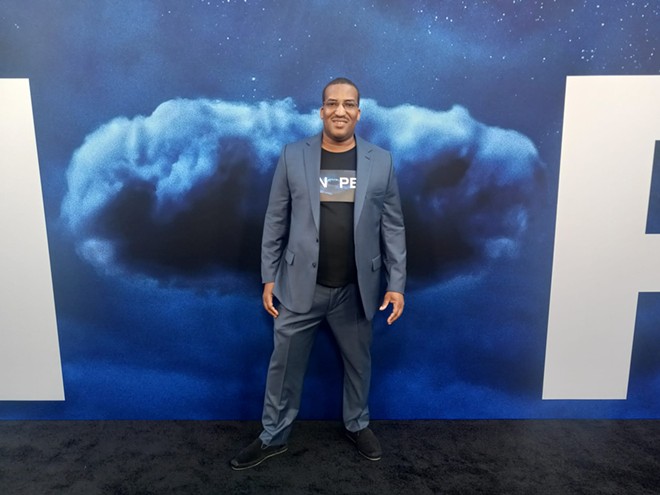 Detroit native Robert McTyre Jr. worked as a set lighting technician on the film, a fancy way of saying he did lighting setup and takedown.

It may seem like a small role, but considering McTyre was once homeless after dropping everything to move from Detroit to Los Angeles, working on a Hollywood film is a light at the end of a 12-year-long tunnel.

So how does a man who grew up on Detroit’s east side and graduated from Wayne State University end up on a Jordan Peele set? Airplanes — both literally and figuratively.

McTyre moved to California in 2009 to get a job as an aircraft fueler at the Los Angeles International Airport. Prior to that, he was working at the Detroit Metropolitan Airport after graduating with bachelor's degrees in media arts and interdisciplinary film studies and being unable to find work in the film industry.

Just as he was settling into his new home and finally making decent money, McTyre got fired from LAX and ended up homeless. He slept out of his car for several months, and when it seemed things couldn’t get worse, a car accident left him with nowhere to live.

“It got really real,” he remembers. “I put my stuff in storage and got a 24-hour fitness membership so I could, you know, shower, and then I learned the bus routes. I knew there was a bus that would take all night to loop so I slept on that bus. I would go from that to sleeping on the train and just trying to figure out what I’m going to do from there. At that point, I was thinking about moving back to Detroit, because I’m like, what am I doing.”

Eventually, McTyre met his current fiancée, who graciously gave him a place to live, and he got a job as a security guard at DreamWorks Animation Studios. This gave him behind-the-scenes access that reignited his love for film.

“During late night when I’m patrolling, I can walk through and see the films that they’re working on, how they’re breaking down scenes,” he says. “But I realized I needed some health benefits and [DreamWorks] wasn’t cutting it. Warner Brothers had health benefits so I got a job there and just by interacting with people as a security guard and really through osmosis I got a feel for the industry and the nooks and crannies that you don’t really think about.”

Working security at Warner Brothers was fun, but it wasn’t what McTyre really wanted to do with his life. He wanted to work on films, and he realized, at nearly 40 years old, that he needed to go back to school and broaden his skill set to make his dream a reality.

After enrolling in a program to learn set lighting through nonprofit Hollywood Cinema Production Resources (CPR), he landed a spot in Universal Filmed Entertainment Group’s California Below-the-Line Traineeship. That’s where he got the opportunity to work on Nope.

The program was launched by NBCUniversal in June of 2021 to give on-set experience to students from historically excluded backgrounds. Nope was the first production to participate, and McTyre is one of six members of the program's inaugural class.

Courtesy of Robert McTyre Jr.
Behind the scenes on Nope.

On set, McTyre describes Peele as being focused and about his business.

“I didn’t work under him directly, but when I did see Jordan Peele on set he was very calm and he knew what he wanted,” McTyre says. “I would watch him direct the actors, and he was there to get it done. He was a nice guy, but he was focused, you know?"

Though they didn’t talk much on set, McTyre got to nerd out with Peele a little bit about horror movies at the film’s wrap party.

“He told me what his inspiration [for Nope] was and then I asked him what his favorite horror movie was because I had to ask — I’m a horror fan,” McTyre says. “He told me his favorite movie is ‘Alien’ and that made a lot of sense.”

Since Nope wrapped, McTyre has gone on to do set lighting for a Naomi Osaka commercial and TV shows like Westworld, Perry Mason, Flight Attendant, and Mayans M.C. He’s currently working on an upcoming film directed by actor Chris Pine.

Ultimately his goal is to make his own films, but McTyre says learning industry trades like set lighting is essential to being a good director.

“I haven’t made a feature yet, but I look at it like I’m getting the tools to do that,” he says. “A lot of people want to be a director, but it’s like do you understand the nature of lighting and all of these things? There’s a lot of things you have to know, so I can go from lighting to director of photography which then gives me the tools to make the jump to director.”

Booking a one-way ticket to California back in 2009 proved to be tough for McTyre, but he had to be willing to make difficult changes to manifest his dreams.

“I’ll keep it 100 with you, it’s easy to get comfortable in Detroit,” he tells us. “You have this thing you want to do, right, but then you have your family, your job, whatever you’re doing. You have to be willing to make a drastic change. Buy that one-way plane ticket and you just have to do it. You have to put yourself in a position to fail.”

Nope is set to hit theaters on July 22. It stars Daniel Kaluuya, Keke Palmer, and Steven Yeun, the latter of which also grew up in metro Detroit.

After living in Japan and traveling across Asia, Randiah Camille Green realized Detroit will always be home. And when she says Detroit, she's talking about the hood, not the suburbs. She has bylines in Planet Detroit News , Bridge Detroit , BLAC magazine, and Model D . Her favorite pastimes are meditating...
More
Scroll to read more Movies articles
Join the Metro Times Press Club