Detroit yoga instructor makes a name for himself doing ‘Trap Yoga,’ and it’s actually not as strange as it sounds

Meet us at the trap, we’re doing yoga with instructor Jamel Randall 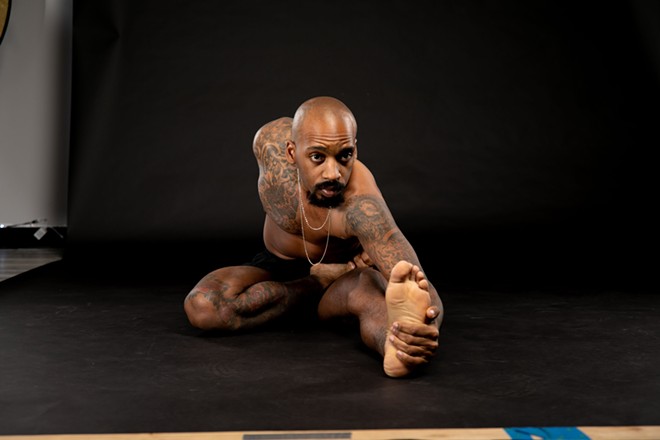 A stereotypical joke was the catalyst for 36-year-old Jamel Randall’s “trap yoga” business.

“No rap music, Jamel,” the Detroit native remembers being told when he was training to become a yoga teacher.

He wasn’t offended by the notion that he, the only Black male in the class, would play rap music, but he did wonder what would be so wrong about rap music in a yoga class.

“It caught me off guard because I wasn’t even thinking about using a rap song,” he says. “But over time I started thinking about it, like, why not rap music, and why wasn’t I thinking about it when I know that’s what I listen to? That gave me a reality check right there, and I said to myself, if I ever do this, I’ll never work for anybody else.”

He adds, “I’m gonna do it in my own space so I can do what I wanna do. Imma play all the cuss words and everything so that people can start to realize who we are instead of buttering everything up.”

That’s exactly what he did. Randall is the owner and head teacher of Detroit’s Trap Yoga and Massage Studio at 3179 Franklin St. Randall has made a name for himself by playing rap music during his classes, garnering popularity around the city.

Over the summer Randall hosted a “Yin Nights” series downtown at the Spirit of Detroit Plaza that saw around 100 people, most of them Black, practicing yoga between Jefferson Avenue and Larned Street. Nearly 1000 people attended his "Trapchella" event, a day of meditation and yoga in partnership with the City of Detroit.

Now his studio is gearing up for an Immersive Van Gogh Yoga series that runs every Sunday from Oct. 30 to Nov. 26.

“I never make it ridiculous,” he notes. “It’s never doing this crazy, ‘OK touch your head and twerk this and twerk that.’ I never have ‘bitch, fuck, fuck, fuck this shit’ and all that stuff coming right at you. It’s strategic. What I want to do is wow people where they come in and they like dang, the music. Then they’re like dang, the practice — like, I actually did yoga.”

When we attend Randall’s Ashtanga Remix class on a quiet Friday morning, it’s a fairly traditional flow aside from the Cardi B in the background. 2 Chainz played as we moved through Surya Namaskar (Sun Salutation) A. Nipsey Hustle rapped “I been grindin’ all my life” during Surya Namaskar B.

Aside from Randall just playing whatever he wants to listen to, the music is a gimmick of sorts — one that he uses to draw in a community of Black folks who may not be interested in practicing yoga otherwise.

But once they’re in the studio, they get the benefits of a mindful and intentional meditation practice.

“People get to do yoga to trap music and that makes them feel lighter already, because they think, ‘Well, he can’t be that serious if he’s teaching trap yoga,’” he says. “Then they come in like man, ‘He’s talking about breath, he’s talking about the movement, he named the poses.’ And then at the end of class, I can have a conversation with you and tell you what you were experiencing. That part is where I get ’em and they start to like me. The curiosity is the trap, but the teaching is what holds them.”

Randall doesn’t just want his students to shake their asses to rap music in a yoga class — he wants them to learn the tenets of yoga like observing the thoughts and meeting discomfort.

“So many people feel discomfort and the first thing they do is pull back and pull away because they don’t like it,” he says. “As we all know, in order to reach new heights, you have to have some level of discomfort, so teaching people to realize it and breathe through it on the mat prepares you for uncomfortable situations off the mat.”

Randall first became interested in yoga after suffering a back injury in the gym. He took a yoga class at Lifetime Fitness after a friend recommended it, and was hooked on the first try because “everyone looked sweet.” So he applied for teacher training with Jonny Kest in Birmingham.

Randall lied on his application and said he had been practicing yoga for years, but his cover was blown about two weeks into the training when it became clear he didn’t even know what downward facing dog was. 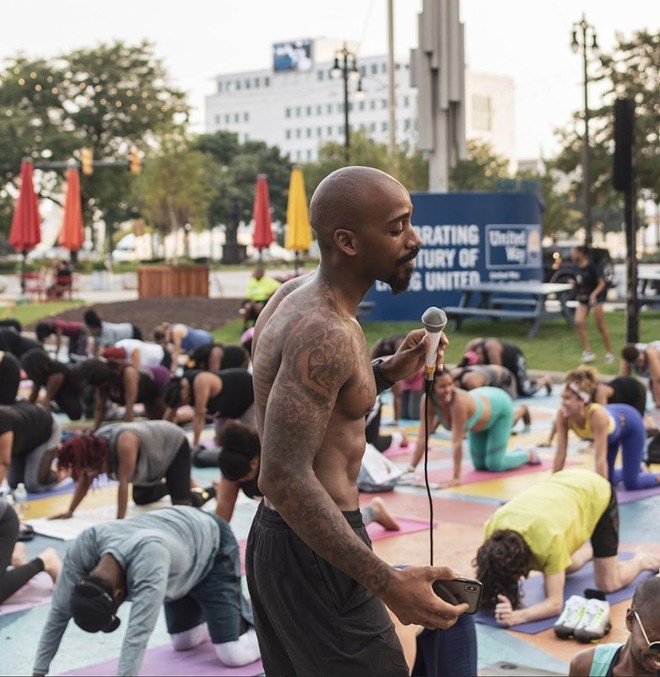 Courtesy photo
Randall hosted a “Yin Nights” series downtown at the Spirit of Detroit Plaza over the summer that saw over 100 people, most of them Black, practicing yoga.

“Later on that evening his assistant emailed me and she said, ‘Jonny says that you can be a vessel to a community that he can’t reach and he wants payments to be the last thing you have to worry about,’” he recalls. “I don’t know if he’s ever done that for anybody, but I made a commitment to really dive into the practice after that.”

Randall started going to Kest’s studio every day at 5:30 a.m. for his “follow the yogi” meditation. After he finished his first 200-hour training, the minimum you need to become a certified yoga instructor, he took it a second time, then went on to get a 300-hour certification. He later trained with David Williams, who is credited with bringing Ashtanga yoga to the U.S., and started his own practice.

Before the Yin Nights and Immersive Van Gogh Yoga, Randall was hosting monthly Trap Sunday popups around the city in 2018. Before that, he had a small space in Lathrup Village where he would do massages and his own “follow the yogi” meditation sessions.

“The first Trap Sunday I had about 40 people, and then I got as many as like 100 people and it stayed at 100 consistently,” he says. “Then I ran into Jonny again and he’s like, ‘Man I’ve been hearing about you and you’re doing really good. Have you started doing yoga teacher trainings yet? That’s how you build your following.’”

Randall took his teacher’s advice and has since trained around 100 yoga teachers to date. He opened his Trap Yoga and Massage Studio in 2021 and developed his own teaching method — unsurprisingly called “TRAP,” which stands for trust, reveal, accept, and patience.

He says the idea of non-attachment is what got him hooked on yoga. He had gotten into working out in the first place as a way to distract himself from his parent’s death.

“My parents both passed right before then about eight or nine months apart from each other,” he says. “When I got into yoga I went in for the physical aspect of it, but we gave up a lot of things for training, like sex, alcohol, drugs, meat, basically taking on this pure lifestyle. I was 23 at the time and it’s like, ‘Why would I try to do that?’ But I realized I was throwing stuff on top of me and what I really needed to do was take stuff off of me. So once I saw the power in non-attachment, letting go, and revealing my story in yoga teacher training, I could be vulnerable.”

He adds, “Being vulnerable was one of the keys toward liberating myself mentally.”

On most days, you can find Randall at the studio at 6:30 a.m. for his mindful meditation sessions. Other classes include Soulful Trap n’ Flow, Trap Yin-Yasa, and Yoga Basics.

He says the most important thing is to show people that practicing yoga doesn’t somehow elevate you to monk status, and you can still be a normal person.

“Jonny taught me that. He would come in and say, ‘Jamel, did you watch Lebron James last night?’ Hell, yeah I watched Lebron James!” he says. “You get so many people who take this superficial liking [to yoga] and they make it a new label and say they're enlightened to make themselves better than you. They say, ‘Oh, I went through yoga teacher training and I’m a yogi now,’ and it’s like damn, I was hoping that you were just human.”

Randall is working on his first book, titled Trapped… The Way Out is Within, to be released in January of 2023.