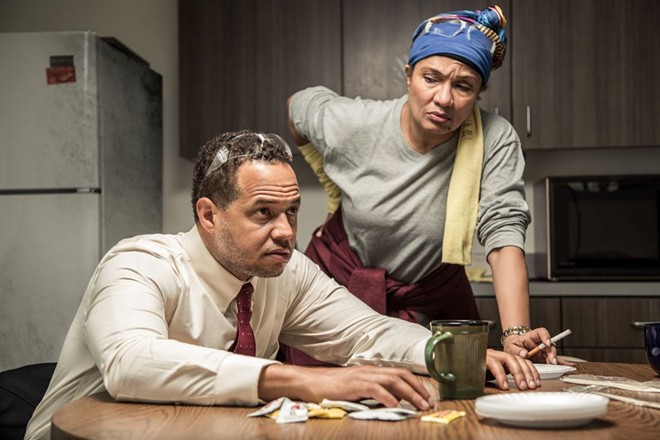 Morisseau has always championed her hometown in her work. Skeleton Crew, which tells the story of autoworkers whose plant faces foreclosure, debuted on Broadway in 2021. It’s been nominated for best new play, best costume design of a play, best scenic design, and best featured actress.

“The play is set in 2008 when the big foreclosure crisis happened. The auto industry was in trouble and that’s what built my family. I wanted to create an anthem for the working class folks in the D that keep this country driving forward,” Morisseau told Metro Times about Skeleton Crew in a December 2021 interview. “This was my way of paying homage to my family and to remind the country who’s doing the labor that they take for granted.”

Skeleton Crew is the final play in Morisseau’s trilogy Detroit Projects, which highlights pivotal moments in the city’s history. It originally debuted in Detroit in 2015 and had an off-Broadway run in New York before going full-on Broadway last year.

To be honest, when we heard the news about Skeleton Crew's Tony Awards nominations we weren't at all surprised. Another one of her plays that was on Broadway last year, Ain’t Too Proud — The Life and Times of the Temptations, was previously nominated for 12 Tony Awards.

The Tony Awards winners will be announced at a ceremony on June 12 at New York’s Radio City Music Hall.

Meanwhile, the Detroit Public Theatre is gearing up for a new production of Morisseau’s play Detroit '67 starting Wednesday, May 11 at the Charles H. Wright Museum of African American History. Performances will go until June 5.

Detroit ‘67 is the first play in Morisseau’s Detroit Projects series and centers around the Detroit Rebellion of 1967. The Detroit Public Theatre is offering “pick your price” tickets for the Wednesday, May 11, and Thursday, May 12 performances.

Morisseau serves as the Detroit Public Theatre’s Executive Artistic Producer. More information about the Detroit ‘67 performances, including tickets, can be found at detroitpublictheatre.org.