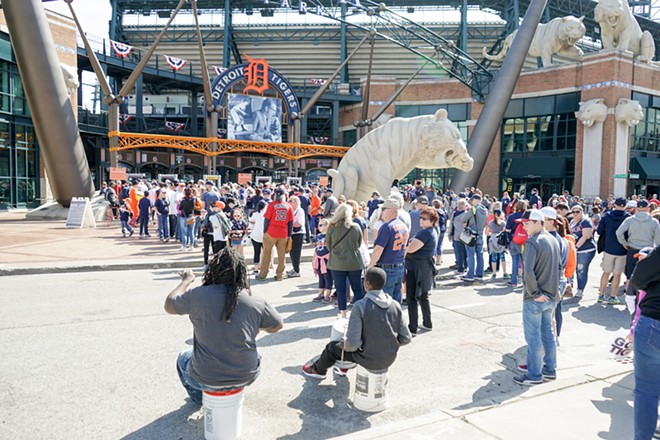 The big day is finally upon us. How will you celebrate? While open intoxication is still very much illegal in Detroit, many restaurants and watering holes will open their doors early for the onslaught of Tigers fans looking to pre-game, post-game, and play hard.

Starting at 8 a.m., Anchor Bar will celebrate Opening Day with its grand re-opening party and offer drink specials all day and DJs. No cover.

Starting at 10 a.m., Beacon Park will open its doors for a day of family-friendly festivities. Fans can tune in to the game inside Beacon Park's heated tent, and Lumen Detroit will offer up a cash bar. Food trucks, lawn games, and giveaways will also be present. is free.

Starting at 8 a.m., Brass Rail Pizza Bar will join forces with neighbors Annex, Latin Room, and the Tent with music, food, games, and the big game on multiple screens. Cover starts at $20.

Starting at 10 a.m., Briggs Detroit christens its roof deck patio for the season with drink specials all day. No cover.

Music from Detroit's "Prince of the Blues" Chris Canas starting at around 4 p.m. (depending on when the game ends).

Starting at 9 a.m., food and drink specials will be on the menu all day. No cover.

Starting at 9 a.m., Detroit Beer Co. will open up all three floors with a live DJ. No cover.

Starting at 10 a.m., Detroit Foundation will open up its patio with a tailgate party with a complimentary ballpark-inspired food menu, cash bar, and will offer free shuttles to Comerica Park via The Handlebar.

From 8 a.m.-6 p.m.; $10 game ticket includes a pass to a shuttle that runs every hour and a beer (or you can just park for $15). Miller Lite will be bringing you specials, autographed Tigers swag giveaways, and the chance to win a once-in-a-lifetime batting practice experience.

Starting at 8 a.m., drink specials and day menu will be on deck, and the big game will be on the big screen. No cover.

Starting at 7 a.m., Eastern Market will host a tailgate. Cost is $45 per car or $185 per party bus or RV. Online purchases only.

Starting at 7 a.m., join 101.1 the WRIF for an all-day broadcast and Opening Day party. McDonald's will offer free coffee and donut sticks to the first 100 people, and there will be additional giveaways, including tickets to the big game. No cover.

Starting at 8 a.m., pre-gamers can indulge in drink specials and DJs. No cover.

Starting at 10 a.m., Fort Street Galley will serve up its usual food offerings, as well as game-day drink specials and DJs.

Starting at 10 a.m., the Second Annual Opening Day Soirée will feature hot dogs, veggie dogs, corn on the cob, popcorn and, of course, beer, including three special Opening Day beers: Corner Lager, Peach Wheat, and Pinetar Double IPA. Live music by Jyarsch starts at 10:30 a.m. on the patio with some outdoor games. The event is free and open for all ages until 9 p.m. and 21+ only after.

Starting at 10 a.m., Tigers fans can join 97.1 The Ticket as they kickoff its annual Grand Circus Block Party. No cover.

Starting at 8 a.m., Hockeytown will kick off opening day with a rooftop patio pre-party. There will be heated tents, a revamped food and drink special menu (including a liquid smoke Bloody Mary), as well as music from DJ . is $20 before 4 p.m.

Starting at 11 a.m., Legends will offer $20 hand-cut filet mignon, cigar hookah service, HDTV broadcast of the big game, as well as entertainers. is $10.

Starting at 9 a.m., the Detroit Home Opener Festival will kick off what is hailed as the city's biggest Opening Day party. Features include heated tents for an indoor/outdoor celebration with DJs, bands, beer tents, full bars, local food vendors, games and TVs aplenty. Tickets start at $20.

Starting at 7 a.m., Old Shillelagh will open up its doors as well as two huge outdoor heated tents with live entertainment, DJs, and a game-day menu.

Starting at 11 a.m., game-day food and drink specials will be served up as will the big game.

Starting at 9 a.m., Town Pump will once again throw a huge parking lot party with DJ Zig-Zag, drink specials. Proceeds will benefit Bartenders for Good. is $15.

Starting at 11 a.m., DJs Sam Morykwas and Nick Speed will hit the decks. No cover.