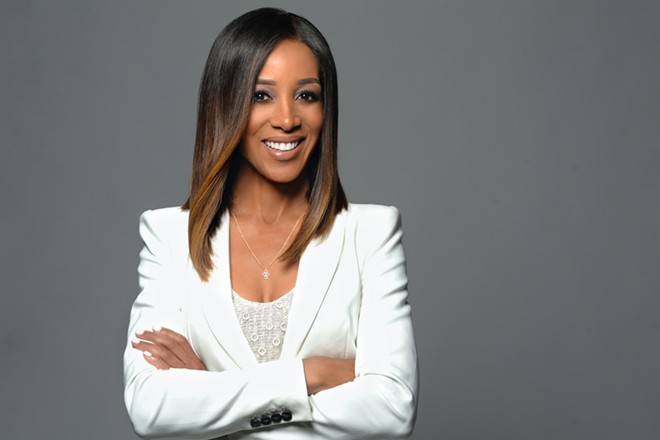 Years ago, after she had become cemented on the national scene as anchor and correspondent for the daily entertainment-news series Access Hollywood and cameo roles in films like Dr. Doolittle 2 and Bruce Almighty, Shaun Robinson wrote two powerful words on her vision board: Executive Producer.

“I don’t say, ‘Next chapter,’” she muses from her Los Angeles home. “I say this is an additional chapter in my life, just being able to be a creator and helping actors, producers and others receive opportunities in this industry. I know when I see my name on my screen when these movies air, I am going to be screaming.”

Like many dreams in Hollywood, or elsewhere, Robinson’s producing vision took a while to materialize: four years, to be exact. The telemovies are based upon two of the ambitious anthology of Seven Deadly Sins novels by author Victoria Christopher Murray. “I was talking to Victoria the other day about how long ago I optioned these books from her,” Robinson says. “We decided it was 2017. It’s been a long time coming.”

Robinson could not have envisioned the first two productions her vision board inspired would carry titles like “Lust” and “Envy.” Even more improbable, she couldn’t have imagined one of America’s most renowned evangelists, Bishop T. D. Jakes, would be intrigued by those “sins” as well.

As Robinson recounts it, after a book editor friend at Essence magazine recommended Murray’s first novel, she subsequently signed an option deal with the author for all seven books. She then pitched movie adaptations to production companies and networks in Hollywood and beyond, including Lifetime and Jakes. “We received immediate interest, positive response from almost everybody,” Robinson recalls.

However, there were no takers until she received an out-of-the-blue call from a Jakes representative asking if she still held the Seven Deadly Sins rights. Jakes had produced a successful TV-movie for Lifetime in 2018, Faith Under Fire with Toni Braxton, and was looking for other properties to develop.

“I heard, ‘T.D. Jakes would like to do it with you,’” remembers Robinson, who had interviewed the bishop several times in the past. “It really is more his brand, seven deadly sins. So the stars had to align. That’s what I tell aspiring producers: sometimes you think the answer is ‘no,’ but it really may be, ‘not yet.’”

However, due to the insidious impact of coronavirus, Robinson was deprived of many of the fringe benefits executive producers typically enjoy. There is no obligatory photo of her sitting in a director’s chair with her name stitched on the back, or hanging out with Jakes, the cast, and crew. While she remained in daily contact during the filming of the movies via Zoom, strict COVID-19 restrictions prevented her from flying to the Atlanta set to witness the filming in person. Even the casting was done primarily through Zoom. “I learned that once a project has been greenlighted, that’s just the first step,” Robinson says.

Apparently bitten by the producer bug, Robinson says her S.H.A.U.N. (STEM, Health, Arts, Unity, Neighborhoods) Foundation for Girls charity is working on a documentary about implicit bias toward African-American girls. Lest any of her fans worry about Robinson disappearing from in front of the camera, fear not: she is the poster girl for TLC’s 90 Day Fiancé, one of the most successful reality-TV franchises in history — because of the show’s theme, Americans marrying persons from abroad, it’s seen in more than 168 countries and territories — and hosts the spinoff series, 90 Day Bares All, on the new streaming service Discovery+. In fact, this month also includes the spicy 90 Day season-finale “Tell All,” which Robinson has moderated for years.

“I find it so funny when people ask, ‘Are you getting away from being on television?’” she says. “Not only am I not getting away from it, I’ve gotten into it like I never have before, hosting this docuseries behemoth. No, I never plan to get away from TV.”

When the Cass Tech alum graduated from Atlanta’s HBCU Spelman College, she could have journeyed anywhere to begin her broadcast career. She chose to return to Detroit, where she landed a job at WGPR-TV, the first TV station in America owned and operated by African Americans (now CBS affiliate WWJ-TV). She eventually became host of her own daytime talk show, Strictly Speaking; one local newspaper hailed her as “Our Own Oprah,” and her star was launched. But why Detroit as opposed to, say, New York?

“I say, ‘Why not?’” Robinson counters. “I love my city, and it provided a wonderful opportunity for me. Working at a small, independent station in Detroit, my parents got to see me on TV and know their little girl was doing well. That’s where I learned to write, to report, to edit. I had my own talk show. So that was a very, very exciting time for me. Yes, I love my city. I’m wearing my ‘Detroit Versus Everybody’ T-shirt right now.”

Jim McFarlin, former media and entertainment critic for the Metro Times and The Detroit News, is an award-winning journalist whose work has appeared in People, USA Today, Black Enterprise, HOUR Detroit, and many other publications. His latest book, The Booster, about the decline and fall of U-M’s Fab Five, is...
More
Scroll to read more Arts Stories & Interviews articles
Join the Metro Times Press Club