Maybe you’ve seen a bouquet of roses and sunflowers decorated with eucalyptus and wrapped in burlap come across your Instagram feed with the simple caption: “If you love them, Detroit Flower Co. them.”

What was once a side hustle has turned into a six-figure, pandemic born company for 22-year-old Ja’Nye Hampton. The spunky florist founded Detroit Flower Company last summer during the height of the pandemic.

Her start in floral artistry began years ago while she was still in high school. Like most sophomores, Hampton decided to get an after-school job. Instead of making burgers or cups of coffee, she made bouquets at Thrifty Florist, a local florist chain. During her time there, she became quite popular with the regular clients who noticed she had a natural knack for floral design. 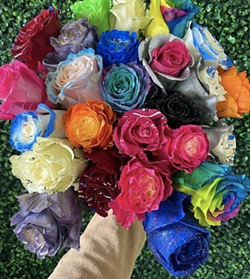 Courtesy of Detroit Flower Company
Taste the rainbow ... with your eyes.

“It just kind of got to a point where people would come in after three because they know I worked from 3 p.m. to 7 p.m. because I was still in high school,” Hampton recalls. “They would come in and say “Hey, we want that small girl to make them.”

Despite being a talented florist, Hampton wasn’t drawn to floral design immediately. After graduating high school and enrolling in college, Hampton left all things floral behind. Instead, she became a certified fitness trainer and yoga instructor and opened her own juice bar. It wasn’t until a friend asked her to arrange a grocery store bouquet for an event that her close friends began to push her to return to her florist origins.

“My friend really pushed me to open Detroit Flower Company as a business,” says Hampton. “Although, maybe like the first six months I had one customer and it was her secret admirer.”

While Hampton was still on the fence about becoming a florist, she continued to take floral orders during the pandemic. Eventually, her arrangements became the topic of conversation on Twitter, which helped shape and grow her clientele.

“Twitter took it and blew it up for me,” says Hampton. “I always thank Jenn, Queen of Southfield on Twitter. She and Kourtni mentioned me every single day and I started to gain followers from them.”

“I just love coffee, I love everything about it,” says Hampton. “I would love for people to be able to buy coffee and flowers from the same place in the hood.”

While Detroit Flower Company continues to bloom after growing in the darkness of a global pandemic, Hampton says she wants to continue to make her clients feel special and connected. Though she is running a business, she wants her clients to feel they are getting more than flowers, that they are gaining friends, as well.