Chicago is not Detroit: But which 'Detroit' does that mean?

Photomontage from Shutterstock images
Don't worry, Chicago: Your future as an aspiring Alpha+ Global City remains secure.
You know, maybe we've become too used to "Detroit is the next [insert city name here]" being a catchphrase.

It all started about five years ago: We had to get used to Detroit being called the next this or the new that, as reporters airdropped into town. It was even a bit amusing to see Detroit heralded as the "New Brooklyn," or the "New Berlin," or the "New Los Angeles." You have to admit, for most of the people who live outside the city's "Green Zones," it's a bit of comedy gold to hear we're the new version of another, much more cosmopolitan city (especially when you call the police and they show up 24 hours later).

Associating Detroit with all these hifalutin places doesn't change our realities, but something strange happens over time: You get used to that New Detroit rhetoric. You become accustomed to people essentially overestimating your town.

Which is strange, because Detroit was underestimated for so long. (OK, being in Detroit was considered worse than a death sentence.) But when you have all these overly beaming, Pollyanna headlines about Detroit, you're almost unprepared for that old attitude. When one writer covering the death of Atlantic City called it "Detroit with a boardwalk" a few years ago, it sounded almost passé. Don't you writers know we're the "New hipster Valhalla"?

Which is why we were surprised to see that split personality manifest itself again this week, in a piece reassuring Chicagoans that their city isn't "Detroit." (Itself a response to another article in libertarian Reason magazine.)

Yes, the use of the name as a stand-in for everything that can go wrong with a city persists. But we're starting to see it break down along demographic lines. We'd wager that the younger, more progressive, more coastal folks are likely to embrace Detroit being new and exciting, and that older, less progressive, heartland types are liable to view Detroit in all the old negatives. 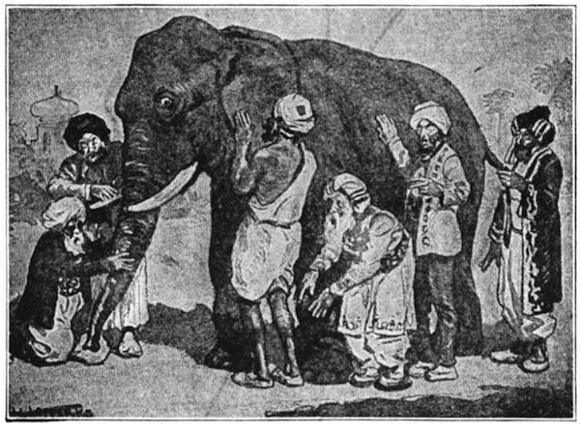 From "World Stories for Children'' by Sophie Woods, Ainsworth & Co., 1916
Blind pundits discover and declare Detroit's identity.
As this new piece proves, they're both a little bit right, and plenty wrong. Detroit's economy has been "a drag on the rest of Michigan"? Not bloody likely. Just because our metro Detroit's development strategy apparently was to concentrate all its poverty in the central city doesn't mean you get to see it separately from the rest of the region. Our six-county area has almost half the state's population, and a GDP of $203 billion. And what buying power does remain in the city is actively courted by the suburbs: For instance, the Fair Food Network estimates that Detroiters spent more than $200 million last year just on food in the suburbs.

So what's going on here? Something very unusual. As Michael Stone-Richards told us a few years ago, the identity of Detroit is up for grabs in a way it hasn't been for a generation or more. And, even if we're poised for upbeat narratives about our city, we should be vigilant about making sure that they do our city, with all its glory and all its ills, justice.