In a sequel to 2012’s ‘Burn,’ co-directors Tom Putnam and Brenna Sanchez found ‘a once-in-a-lifetime opportunity’ to document DFD 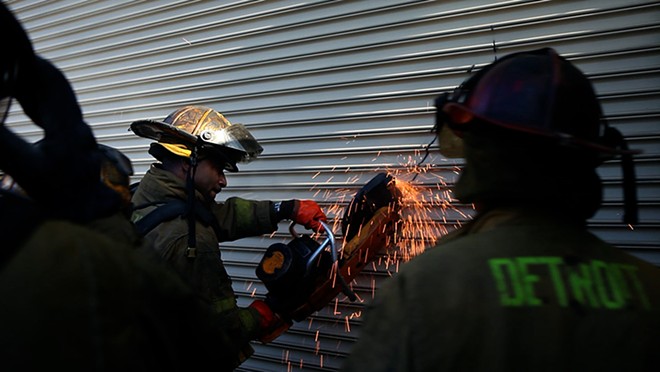 One function of filmmaking is archival: the medium always serves to record, whether through documentary or narrative, the feeling, style, and atmosphere emanating from a particular time. Following a decade from the release of 2012’s Burn, which aptly captured the notoriously overextended Detroit Fire Department in the years before the city declared bankruptcy, co-directors Tom Putnam and Brenna Sanchez have returned with a follow-up in Burn X. The film follows a dizzying stretch of work that’s remained extremely perilous — in part due to underfunding amid variously visible signs of an evolving urban landscape.

In anticipation of the film’s release this week, Putnam volunteered for a phone interview with the Metro Times, presented in condensed form here for both clarity and concision.

Metro Times: What made you want to do a sequel?

Tom Putnam: So we started filming the first Burn film 12 years ago. It was released 10 years ago, almost to the day. And with the first film, we started out filming about a dozen and a half different Detroit firefighters and family members, not knowing who the main characters of the film were gonna be. The film ultimately ended up [being] about three people, two of whom weren't even in that [initial] group. So we met all these amazing people, and filmed about 1,000 hours for the 86-minute movie.

And I couldn't believe there were so many incredible stories that we couldn't have in the movie — people we filmed for like a year, and they had maybe two lines and the finished film. So I wanted to create something that kind of expanded world that people got introduced to in the first film.

MT: How did you go about structuring this, given all you decided to shoot?

Putnam: This is definitely the hardest project I've ever worked on. Editing credit is shared with myself and Sam Hook, who started out on this about eight years ago as an assistant editor, and has basically been editing this movie [for] most of the last decade. So it was just a lot of trial and error, probably 30 or 40 different edits of the movie, all of them dramatically different, before we settled on what people will see now.

MT: What kind of shooting schedule did you have over the decade or so of work and how often were you in Detroit?

Putnam: Basically, when we knew something big was gonna happen in Detroit, we would come on film for a few days. So we ended up there a couple of times during the bankruptcy, when different people graduated at the height of the pandemic... Luckily, we know so many people in Detroit now. There were times where we would get a phone call in Los Angeles, where I live right now, and find out something's gonna happen the next day — and have to call a crew, get a camera, and jump on a plane to catch it.

MT: What’s your relationship to Detroit — both before and during work on Burn, but also through the duration of working on the Burn X?

Putnam: So I’d never been in the city before the first Burn film, and Brenna kind of grew up in the city [at] Grand River and Lahser, and so we came to it from two really different places. For me, coming to Detroit and seeing the volume of fire fires and what these guys were doing everyday to try and stave off the destruction of entire neighborhoods was jaw-dropping. For Brenna, the surprise was that every city wasn't like that. I think for people who grew up in Detroit, that level of arson and destruction is really normalized. So I like to think both films have the knowledge of an insider while at the same time knowing what’s gonna be surprising or what people outside the city may not know.

MT: The time in which you've been shooting has been a period of really intense and often overstated change in Detroit. What was it like observing and figuring out how to frame that moment of transition, particularly with regard to the sort of “renaissance” narrative?

Putnam: Yeah, I don't think I've ever had a single trip to Detroit where somebody doesn't use that word. So for us, we tried to present the audience with what it was like to be in-the-moment, where all these different things happen. There were times when a year or two would go by without anything happening, so it was a challenge to kind of drop people into these moments. You know, there’s a moment in time where the guys are watching TV and find out that a bunch of them are gonna be laid off, even though those guys have been there for years.

So when different issues happened — I mean, it starts on our very first shoot, where we asked a lot of questions that we then are able to answer 10 years later. We found that it made sense to kind of jump back and forth on each of these issues, to remind people about what things were like back when we started filming, and then jump forward to see these moments in time. It was kind of a once-in-a-lifetime opportunity to be able to spend this long with people. So rather than just tell a really linear story — [even though] it’s somewhat linear — it was a really unique situation to be able to jump back 10 years and then jump forward and see how people's perspectives changed.

MT: How did you kind of see the film's relationship to a sort of negative, “parachuting” sort of [journalistic] coverage?

Putnam: I think if you’ve had two flavors of Detroit documentaries the last few years. One is the sort of “ruin porn” that probably everybody in America is familiar with. And the other one, I think, tends to be a very “cheerleader” kind of film that focuses on the positive and ignores the challenges. I tried to land somewhere between those. You can certainly see your share of ruined buildings in the film. But I like to think those have a point. We see a lot of them from years ago, and a lot of them from the same camera angles today. In some cases they’re the same, in many cases, they’re very different. Hopefully, the city and those buildings and things are just kind of the backdrop to see the human drama unfold.

Burn X is available for streaming on most VOD platforms and detroitfirefilm.org.