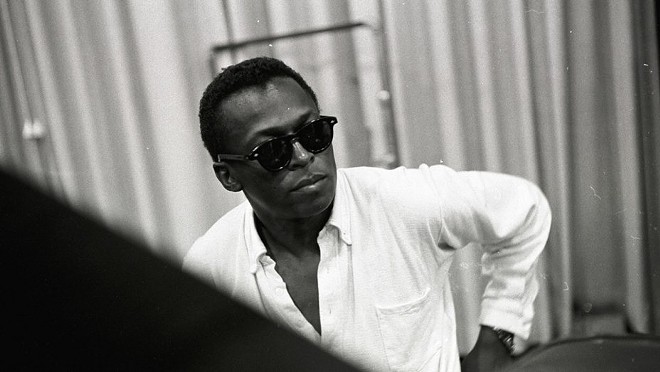 Miles Davis towered over mid-century jazz, and was a relentlessly innovative and restless musician that constantly pushed his personal and creative limits to their breaking points. This compelling new documentary re-examines that legacy — not always in a strictly flattering way — and attempts to frame the very challenging man and the artist in a more comprehensible context.

Director Stanley Nelson Jr. has carefully sifted through a mountain of archival footage, home movies, and personal photos, and has paired them with an impressive assembly of talking heads, including heavyweight musicians and academics like Herbie Hancock, Wayne Shorter, Ron Carter, Stanley Crouch, Carlos Santana, Flea, Questlove, and, most crucially, Davis’s ex-wife, Frances Taylor. The mix of critical analysis and personal reflections from intimates gives the film a resonance that might otherwise have been hard to capture when considering such an eclectic, brainy, and often mercurial subject.

Nelson more or less pursues a linear path through Davis’s life, allowing his musical and private evolutions to be seen in progress, from his teenage years in New York playing rigorous hard bop alongside equally iconic figures like Charlie Parker and Dizzy Gillespie to his late-stage experiments in rock, soul, and funk fusion. While generally admiring of Miles' accomplishment, and enamored of his quirky persona, Nelson doesn’t shy away from his more unpleasant aspects, including extended bouts with drug and alcohol addiction, and the jealousy, volatility, and casual cruelty that dominated his relationships with women. The essential question at the root of Birth of the Cool is if the nature of art, and the artist’s need for re-invention and forward momentum, hindered his ability to connect to the moment.

Metro Times spoke with Nelson to gain more insight into his process and the bottomless mysteries of Miles Davis.

Metro Times: What compelled you to make a film about Miles Davis in 2019?

MT: You certainly don’t shy away from the darker aspects of his personality, and I found some of it, particularly his horrendous treatment of his first wife, to be disturbing.

Nelson: That’s what’s in the film. We wanted to show him warts and all, and that’s what we did. This man, who made some of the most beautiful music I would say, in the history of the world, was a very difficult person. Often, he was not a nice guy, and we set out to tell the whole story.

MT: Do you think it’s inevitable for someone so visionary and talented to be hard to relate to personally?

Nelson: I think it's more normal than not. I don’t think it’s necessary; I hope it’s possible to be a genius and to be a good guy and family man, but that’s not usually the case.

MT: The disconnect seems to come between the size of the talent and ambition and the lack of patience for social niceties — that there isn’t room for both.

Nelson: I also think what comes through is Miles living as a Black man in America and all that comes with it. He’s constantly being slapped in the face by the racism that exists. And how you react to that differs individually. That’s how Miles reacted. We also show that his home life growing up in East St. Louis was full of conflict, and oftentimes that can be reflected in how you treat people as an adult.

MT: It’s said in the movie that hard bop was a purely intellectual genre, and that [they were] turning their backs to the stage and attempting to not entertain as a response to “minstrelsy.” Is that to say that, say, Count Basie entertaining audiences was cheapening the music?

Nelson: Certainly there were people that weren’t cheapening jazz, but felt they had to perform in a bigger way. Cab Calloway, Louis Armstrong, as quietly as it’s kept, Duke Ellington, and Basie were popular dance music for the masses. Bebop was not that.

MT: Miles Davis was at the vanguard of pushing jazz forward as high art; did that not leave him room to accommodate people?

Nelson: They go hand in hand. He was trying to push the genre forward and he wasn’t trying to play nice either. You combine those drives and you get the Miles Davis persona.