As the DIA addresses issues of inclusivity, Black docents help connect the museum to Detroit 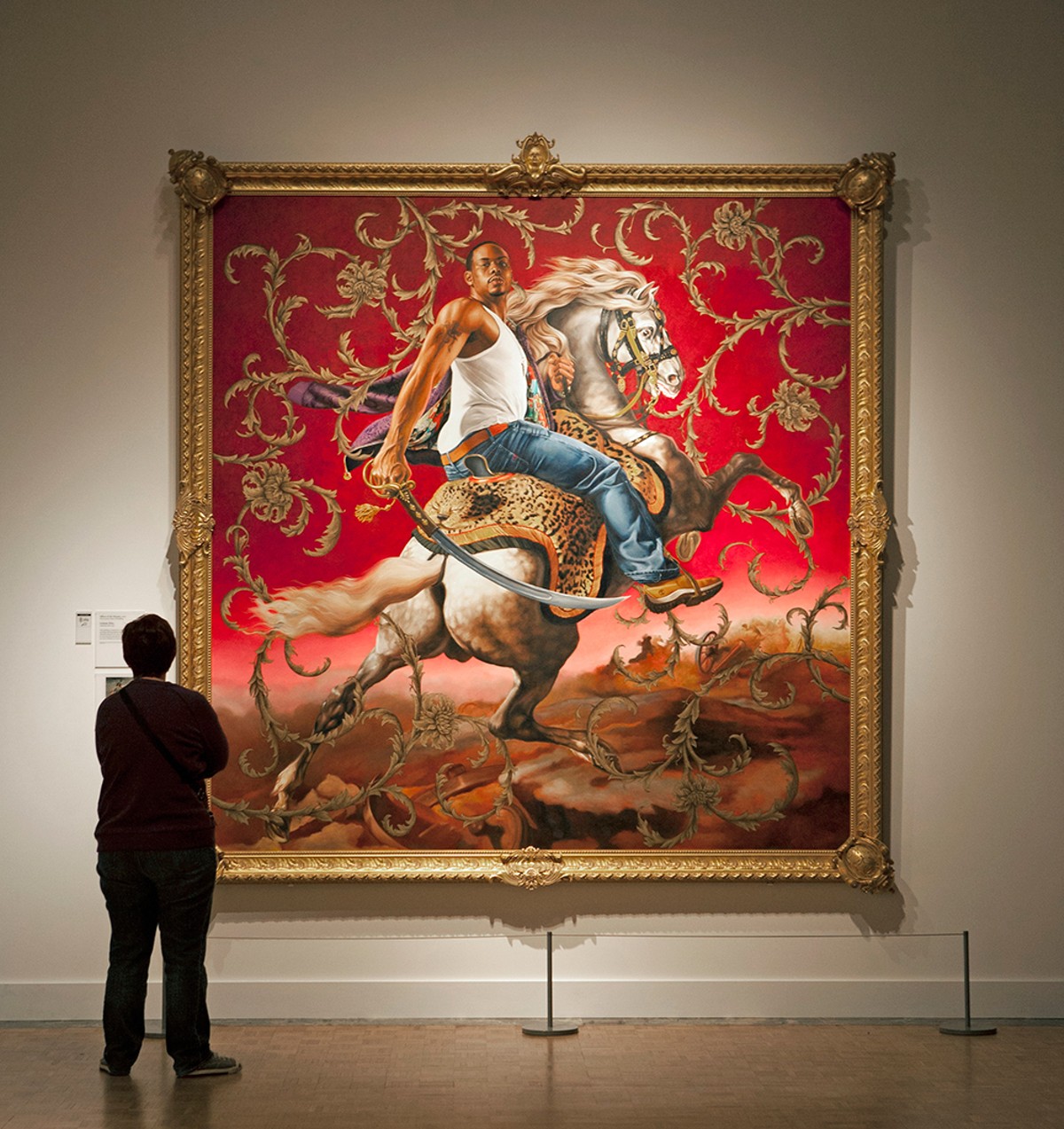 Kehinde Wiley’s “Officer of the Hussars.” Courtesy of the DIA

On a busy Friday evening at the Detroit Institute of Arts, a group of people gather in the African gallery of the museum, associated with Yoruba religious customs. At the center of the crowd is art docent Kija Gray, who first engages with her audience by using the teaching method Visual Thinking Strategies (VTS), a method that uses art to teach thinking, communication skills, and visual literacy.

VTS establishes a conversation between the art and the viewer, moderated by Gray. After a bit of back and forth with her tour group, Gray goes into the historical presence of the artifacts in the room.

"We have entered into a room that honors the significance of Yoruba deities," she says. "Although it's featured at the DIA, this shrine is much more than just art. This is a holy temple. It was a place of worship at one time, long before it became a tour feature."

Docents like Gray are part of the DIA's Interpretive Programs Volunteers (IPVs), one of the various volunteer committees that 600 art-loving museum enthusiasts make up. (The program has been put on hold amid the coronavirus pandemic.) More than just a tour guide, a docent spends nine months learning the diverse collections of art and how to interpret the museum's collections to further the visitors' understanding of art and culture. By attending annual meetings, curatorial lectures, and gallery talks, DIA docents volunteer 50 or more hours and 20 tours per year, enhancing their knowledge. Museum docents, historically, have been male volunteers, however, docentry has become gender-diverse in recent decades. The majority of docents are retirees.

Gray never set out to be a docent. In fact, she never had a big desire to check out the museum at all. "You know the DIA is there, but what's the point?" she says. "The museum was never rooted, to me, in being mindful of the gaze of the Black visitor. At the time the museum was built in the 1800s, we couldn't even come to the door."

That changed for Gray when the Detroit Institute of Arts acquired Kehinde Wiley's 2007 painting "Officer of the Hussars." The African American contemporary artist is known for his naturalistic paintings of Black people depicted as historical figures, drawing inspiration from the works of old masters like Peter Paul Rubens. "Officer of the Hussars" depicts a Black man on a horse during battle, juxtaposed with his modern-day attire of Timberland boots and low-slung jeans. The painting mirrors Theodore Gericault's 1892 painting "The Officer of the Hussars," but inserts a Black man in a historical position of power.

Gray found herself in front of Wiley's piece during a docent-led tour. As the docent was explaining, Gray thought, "There's so much more to this piece that I see as an African woman."

"I see the desire for us to be grounded in the center," she says. "The docent spent a lot of time talking about how Wiley's piece was so connected to the European piece that was positioned right beside it, but I saw this piece as central to the whole experience — the importance of what it means to be grounded in your Blackness, and the docent wasn't addressing any of that."

As the tour moved on, Gray sat and unpacked the piece, leading someone to ask her if she ever thought about becoming a docent herself.

“The museum was never rooted, to me, in being mindful of the gaze of the Black visitor. At the time the museum was built in the 1800s we couldn’t even come to the door.”

Nine months later, after dozens of hours split between classroom training and gallery lectures, Gray was part of the 2017/2018 graduating class of the Interpretive Programs Volunteer Committee. That singular experience with Wiley's portrait led her to be actively involved in the world of art.

According to the volunteer department, Gray's class was one of the most diverse in recent years, a trend that has continued. A spokeswoman for the museum says that the DIA does not have diversity figures for IPVs, as they do not self-identify, but estimates about 30% of the most recent IPV class were people of color. IPVs must be museum members and pay $40 in annual dues, but the spokeswoman says the committee has sponsored dues for members who are unable to pay.

While Gray's class was a minority milestone, the battle for diversity and inclusion rages on in art museums across the nation. A 2019 article in The Guardian highlighted a study involving major U.S. museums and their acquired art, which found that just 12% of the total artists in their collections are women, with the majority being white men. The DIA was one of the 18 museums analyzed in the study.

The issue of diversity at the DIA has come up again in recent months, with employees at the museum, along with those at the nearby Museum of Contemporary Art Detroit, demanding sweeping changes in museum leadership, alleging instances of racial insensitivity. Last week, the DIA announced it had hired Kaleidoscope Group, a Chicago-based diversity-and-inclusion consultancy, as part of an initiative to increase diversification of the museum's board of directors, acquisitions of art by Black artists, and paid internships to bring more people into the industry.

"As our nation's attention has been drawn to inequity and systemic racism over the past several months, it is critical that we move forward with the internal work that needs to be conducted," DIA director Salvador Salort-Pons said in a statement. "The next step for real growth and change is to apply and permeate this internal learning throughout our governance, programming, exhibitions, and overall visitor experience."

If the DIA wants to change its audience, it needs look no further than Atlanta's High Museum of Art, which tripled its nonwhite audience from 15 percent to 45 percent in two years.

Rand Suffolk, the High Museum's director, broadened its audience by changing the demographics of its docents, improving from 11 percent people of color to 33 percent in three years. Radical changes like this won't happen overnight, but a seed must be planted.

In instances like museum inclusion, the ripple effects of any effort, even small ones, can be enough for people to rethink what they've always accepted. "Being present is part of the change," says Gray, who acknowledges the importance of her participation and its effects on Black visitors. "My presence is a responsibility to my community."

And by community, Gray is referring to the 80 percent population of African Americans who live in Detroit but aren't as present in the DIA galleries.

For Gray, her background as an educator helped her to easily transition into her docent role. A first-generation Canadian, Gray was born in Toronto, and her parents are from Saint Vincent and the Grenadines, a chain of islands in the eastern Caribbean. Her early childhood was rooted more in being an immigrant than being Black. "There were white people, and then there were immigrants," she says.

Her Caribbean heritage, she says, allowed her to see Black people in positions of power. "I saw that Black people could be in control of their whole lives," she says. "Colonialism was still a thing, the British are still over the Caribbean islands, but it was still impactful every day seeing that the Prime Minister was Black or my doctor was Black. I was just entrenched in Blackness."

Moving to Detroit in 1989, Gray says Detroit reminded her of the Caribbean. "The mayor was Black — when I got here it was Coleman A. Young — people of the city council were Black, and the school district had made a commitment to have an African-centered education. I knew I had arrived in my adult mecca." Residing in Detroit defined the way Gray interacts and moves throughout the world. "These experiences impact the way I see everything because I think we have the ability to live lives not [in] the white gaze, but seeing ourselves centered in our own reality and learning to appreciate and define our lives by that," she says.

Now, Gray merges museum training and her knowledge and life experience of Black culture to show museum visitors the connection of arts past and present.

"You're always gonna tell a story through your lens," she says. "Representation is important because the same story will always sound different, depending on who's telling it. What can I contribute that will draw a person in if we all just say the same thing? If we don't tell our stories, they get lost."