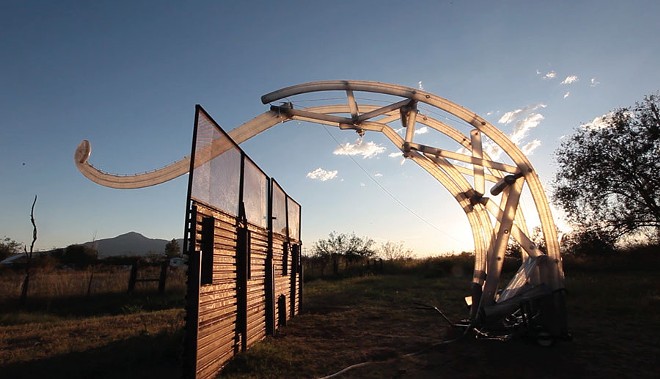 On Friday, Feb. 16, artist Chico MacMurtrie gave a couple demonstrations in Ann Arbor of an inflatable, 40-foot robotic sculpture designed to cross the U.S.-Mexico border. The robot was designed over the course of five weeks with 16 U-M students from across different departments, including robotics, engineering, art, and design. An exhibition of MacMurtrie's drawings and models is currently on view at the university's Institute for the Humanities Gallery. We caught up with the artist to learn more.

Metro Times: Can you explain the origin of this project?

Chico MacMurtrie: I'm half Irish and half Mexican. I was born in New Mexico, but I grew up on the border of Naco, Arizona, and Naco, Sonora, Mexico. In my childhood, my friends in Mexico used to come through a hole in the chain-link fence to go to school with us in America. It was a very "open" closed border in a way. There was sort of dual languages spoken and all that. I went off to college, and would come back every once in a while.

That fence was a prominent image for me. We would have fights over that fence with like BB guns. But it was a really close-knit community that had access to each other. As I came back from college, there was the very first wall. They just slapped these things together to make this barrier. It was a very kludge-y, raw fence. On the American side, it was put together very crudely. On the Mexican side, often they're painted very vibrantly and festively to try to cheer up this horrible barrier, you know. So that's something that has always been a part of my life.

In the last 10 years, I've been developing these inflatable architecture works. I had been making metallic robotics for many years. But I fell into this material because I was interested in more of a gestural, softer quality. I started making these high-tensile fabric inflatables that could reach monumental scales. That's why they're called "inflatable architecture." Ten years ago was when I first drew this sort of bridge form. And that evolved into this notion of an arc that could lift itself up into a tower and bend over something, in this case — the fence.

MT: How does it work?

MacMurtrie: We built an autonomous vehicle, a vehicle that's meant to be able to be programmed to chart a path. We're trying to teach the vehicle a behavior and have it repeat it. Ultimately that would allow us to teach the machine to go to a given site — in this case, the border wall. It also has a series of onboard blowers, so it would end up being tetherless. The idea would be you could deploy it from a vehicle, or a truck, and then it wanders over to its location. It looks like a big pile of fabric, really. And then the big pile of fabric starts to grow exponentially and then push itself up in the air and form this arc. And then the last half of it projects itself out of the first half and bends over the border, and then it draws itself up, collapses again, and off it goes back to its vehicle. 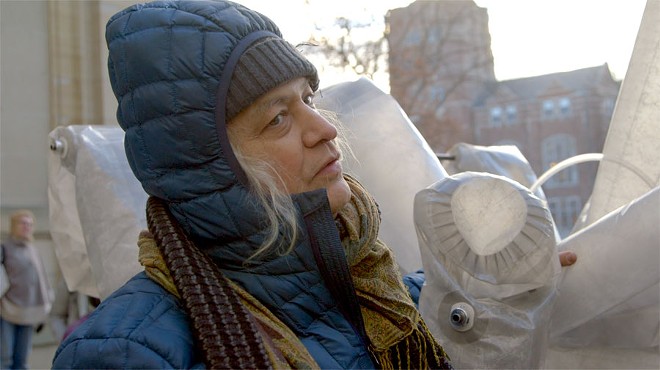 
MT: Do you envision this invention having a utilitarian purpose in delivering goods or otherwise thwarting a border wall, or is it merely symbolic?

MacMurtrie: It's completely a symbolic creation. It's about unity and peace. My ultimate goal would be to build six of these, and the idea would be to have one on each side of the border and they would be deployed simultaneously and form this archway over the border. It's a gesture to oppose all of this separation of countries and people and divisions. It just happens that our current government, the piece becomes more important because of everything's that's going on now. It's kind of timely, but it's been going on for years now.

MT: What has it been like watching the border debate since your childhood?

MacMurtrie: For the last 27 years or something, there's been this surge of border patrol — certainly in parallel to the fragility of the Mexican economy due to NAFTA. There was a huge shift of Mexican immigrants coming to work here.

My uncles came to work with my father on a stallion ranch in the '30s and '40s. Eventually they were able to become American citizens. But from the '40s all the way up to now, and [especially] in the 2000s, there was just this surge of Mexican immigration across the United States, and it's completely parallel to us helping to destroy their economy. The Mexicans working in America helped create a whole new economy in Mexico by sending money back. Them coming here helped equalize it to a degree, but the suffering that occurred with what they're going through now, with the DREAMers serving as a pawn for the government trying to get their way... it's a pretty packed debate.

MT: What are your next plans for the robot?

MacMurtrie: We're collaborating with the robotics department as well as the engineering and art departments. The robotics department is very interested in this thing going to this big [competition] in Detroit. I would be up to do that, especially to give the students this opportunity to perform it again. Ultimately what we want to do is get this project back to the desert to start running it out there and do some more trial runs. The first performance could be as soon as May of this year.