Another free community fridge has popped up in Detroit's Islandview neighborhood A brightly colored fridge proclaiming “free food for everyone” has sprung up on the corner of Kercheval Avenue and Field Street in Detroit. The community fridge and pantry located at 1812 Field St. is a partnership between Planted Detroit, Sister Pie, and Black Bottom Businesses LLC, and is open anytime for anyone who needs to grab some fresh food, pantry staples, or even tampons.

The fridge was officially opened to the public on Tuesday evening and by Wednesday afternoon, the word was being spread on social media.

“We filled them Tuesday evening and I went back [on Wednesday] to take some pictures and half the stuff was gone already,” Julie MacDonald, digital media specialist for Planted Detroit, tells Metro Times. “People were coming up to us asking if it was really okay for them to take stuff, and that just shows it’s needed in the community.”

Planted Detroit is an indoor hydroponic farm that grows salad greens in the Islandview neighborhood, close to where the fridge is located. MacDonald says they will be donating bulk greens and their packaged lunch salads to the fridge about twice a week along with SisterPie.

And if you’ve never had a Planted Detroit lunch salad, you’re seriously missing out. They honestly have some of the best grown-in-Detroit greens we’ve had from any local farm. You can find them at the Eastern Market on Saturdays and inside Rivertown Market on Jefferson. They also deliver within Detroit.

If you aren’t hip to the world of community fridges, it’s not a new concept. They’re scattered all over the city as part of the non-profit Detroit Community Fridge project. There’s one located at 15052 Grayfield St. next to the Brightmoor community tool bank. Another one can be found next to Hats Galore & More at 10061 Gratiot Ave. 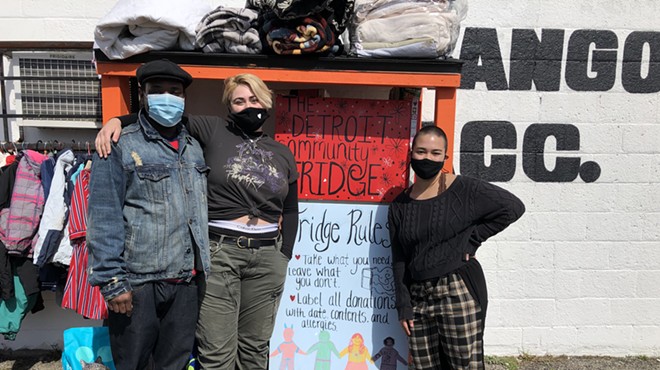 The organization has been featured in Vox and National Geographic for the work they’re doing to address food insecurity. This work is especially important in Detroit neighborhoods where access to fresh, organic vegetables is lacking.

“The fridge is about a mile away from the farm and we wanted to make sure we were hitting people that were really close to home with our products,” MacDonald says. “It’s a resource for people who need the things that we can supply. We’re feeling really positive about this and will continue to serve the community moving forward.”

To donate food to the community fridge, you can drop it off at Sister Pie or right at the fridge itself. Sister Pie also has a neighborhood fund where customers can donate a few dollars on top of their purchase that will be used to buy food for the fridge.