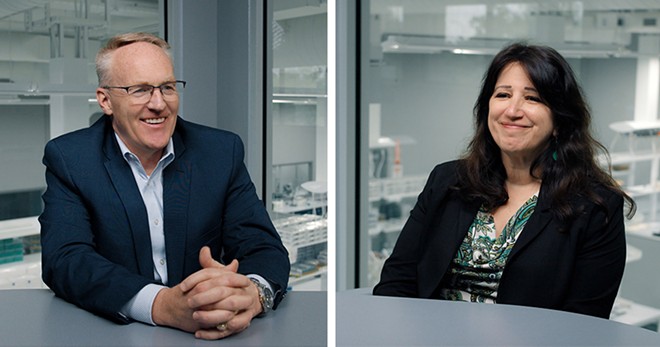 Together, Todd Welch, Greg Michaud, and Dr. Michele Glinn say they have a combined 85 years of experience in testing drugs, much of it through their careers with Michigan State Police; in the forensic science division for Welch and Michaud, and in toxicology for Glinn.

In the early 2000s, MSP's forensic laboratory in East Lansing was one of the largest publicly funded crime lab systems in the nation. But Glinn left in 2011, when recession-triggered austerity measures forced her and her husband, who worked for the U.S. Postal Service, to take furloughs. Michaud retired as the director of forensics in 2016, around the time Welch knew he was planning on retiring in 2018.

"It was my wife," Welch says. "She kept saying, 'What are you going to do in retirement?'" At the same time, one of his dad's friends had been diagnosed with Parkinson's disease, and his dad asked him what kind of testing requirements there were for medicinal marijuana.

Back then, there were none.

In 2016, then-Governor Rick Snyder finally approved legislation to regulate Michigan's medical cannabis industry — eight years after Michigan voters approved cannabis for medicinal purposes. ("I just think it was something that was so much more bigger than what the state government and the legislature thought it was going to be," Michaud says of the delay.)

That's when Welch saw an opportunity.

"I thought, Hey, we know this, we know testing, we know how to properly set up a laboratory," he says. So that year, Welch started asking his former colleagues if they wanted to come out of retirement to get in on a new venture. In early 2018, they formed Viridis Laboratories, a testing lab for Michigan's cannabis industry, with locations in Lansing and Bay City.

It was a prescient move. In November of that year, Michigan voters approved a ballot measure to legalize cannabis for adult use. By then, Viridis Laboratories was poised to enter the lucrative new industry in which there were very few testing labs.

Now, Viridis says it tests about a quarter-million pounds of cannabis flower a year for all the things mandated by the state — for potency, contaminants, pesticides, metals, microbes, and more. They also say they're expanding their services to include testing of nutrients, genetics, and gender of cannabis plants. Another field they're planning to expand to is terpenes, or compounds in cannabis that contribute to its flavor and aroma that will become useful for growers and customers as the cannabis industry grows more sophisticated.

But did these ex-cops, who helped prosecute cannabis crimes in their former lives, ever feel strange about moving over to the legal cannabis side? Not once they thought about it, they tell Metro Times.

Glinn sees no conflict, and points out the philosophy of Paracelsus, the Swiss philosopher of the Renaissance who is considered the father of toxicology.

"It's the dose that differentiates a poison from a remedy," she says. "You can overdose and die on over-the-counter drugs, or you can use things like alcohol that are legal, but could kill you. We are providing that information to customers so that they can moderate their dose so they know what they're getting."

Michaud admits it was a jarring switch at first.

"When Todd first reached out to me ... my first instinct was to say no, because we tested this stuff thousands of times a year for criminal justice purposes — why in the world would I want to go out and test it for legality purposes?" Michaud admits. "But it didn't take long when you started seeing the testimonials that were out there."

Michaud says he was particularly moved by the case of Charlotte Figi, a girl from Colorado who used cannabis to treat her epileptic seizures and was featured in a CNN documentary by Dr. Sanjay Gupta in 2013. The case became a pivotal one in the medical marijuana movement, and the FDA approved Epidiolex, a drug derived from cannabis, to treat epilepsy in children before she died in 2020 at age 13. It remains the first and only drug to be approved by the FDA so far.

Welch also says it wasn't hard for him to make the switch either after talking to medicinal marijuana patients. "The more people that I started talking to that also were benefiting from cannabis, you just couldn't deny it," he says, admitting that the three frequently get "three-mile stares" from people when they tell them of their former jobs, but they quickly disappear when they explain where they're coming from and their passion for testing drugs.

"When you see those testimonials, then it was a simple decision to make," Michaud says. "I think this can improve the quality of people's lives — which is what the call to law enforcement is for us. So it aligned very well, and allowed us to hold on to that core value that we all hold."