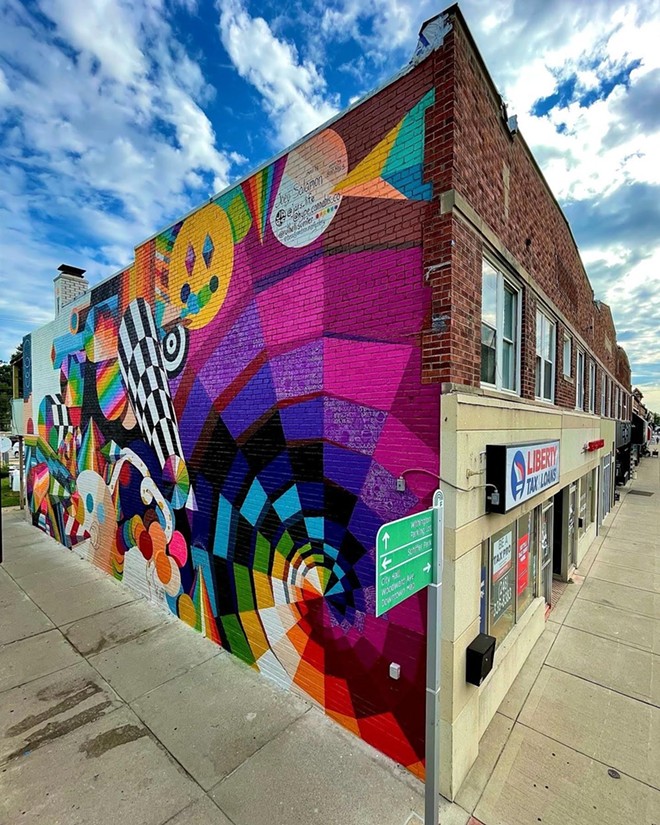 Joey Salamon
The 40-foot by 25-foot mural, titled Polychromatic Super You, was installed by LGBTQ+ artist Joey Salamon in Ferndale.

A vibrant, interactive mural celebrating the LGBTQ+ community in Michigan has enlivened the side of a brick building in downtown Ferndale.

JARS Cannabis, a leading marijuana retailer in Michigan, and HYPE Cannabis, a caregiver-owned cannabis brand, commissioned the mural as an extension of their collaborative “JARS x HYPE: Smoke with Pride” campaign that originally launched during Pride Month in June.

The mural, which was unveiled Friday, is emblazoned on the side of a brick building at 258 W. Nine Mile.

“It's always an extra bonus when I get to create artwork with the main intent to showcase LGBTQ+ representation. For companies such as JARS and HYPE to invest in projects like this, it not only adds visibility, but it helps to create a connection to the community,” Salamon said in a statement. “For them to hire me for this specific project and give me free rein on design, it not only shows their trust in my process, but it also shows their openness to having a queer artist freely express themselves without restrictions on something that is not only personal to me but also to many others in Ferndale and beyond.”

It was curated in collaboration with Chicago-based Beauty & Brawn, which specializes in custom art and mural and installation creation.

“Beauty & Brawn is both proud and honored to have partnered with JARS and HYPE for their Smoke with Pride initiative as we wholeheartedly advocate for and support movements which bring awareness to inclusivity, positivity, and philanthropy,” Lindsey Meyers, co-owner of Beauty & Brawn said. “Through the curation of ‘Polychromatic Super You’ we sought to engage viewers in a joyful, interactive, and unique visual experience. The mural highlights Joey Salamon's vibrant and colorful personality, incredible artistic vision and talent, and generous spirit of heart which he brings to Ferndale and to cities all across America.”

The mural incorporates digital technology to drive awareness and solicit donations to support the LGBTQ+ community in metro Detroit. The mural includes a plaque that features a QR code that allows visitors to scan to donate to Detroit’s LGBTQ+ safe haven, the Ruth Ellis Center, and to learn more about JAR’s initiative and resources.