How Babe Ruth's birthday, back at Nemo's this Feb. 4, became an institution 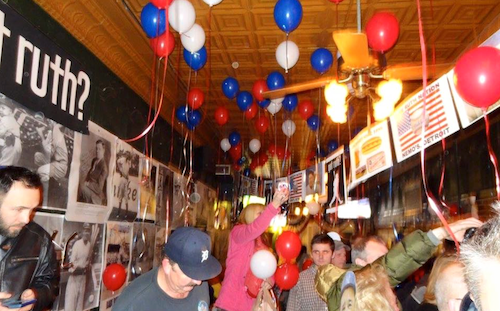 When something earns the moniker “a Detroit tradition,” it’s usually an event that celebrates something unique to Detroit. The March of the Nain Rouge, for instance, is rooted in Detroit’s founding mythology. The annual Thanksgiving parade’s origin is tied to Detroit’s historic department store. The Detroit Electronic Music Festival trades in a sound that saw its genesis in the Detroit area almost 30 years ago.

But can “a Detroit tradition” draw its inspiration from outside the Motor City? More specifically, can an annual Detroit institution honor a baseball player who never played for the Detroit Tigers?

Thanks to Tom Derry, we know the answer is definitely in the affirmative.

Derry, a postal worker by day, and perhaps best known as the founder of the Navin Field Grounds Crew, has been running a yearly party paying tribute to celebrated slugger Babe Ruth. If that seems unlikely to you, the fast-talking, charismatic Derry will quickly persuade even the most doubtful that it makes sense.

Then again, he’s been throwing the Babe bash for almost three decades.

‘A stupid idea’
Derry says that when he first proposed a party celebrating Babe Ruth’s birthday at a Detroit bar almost 30 years ago, “My friends told me it was a stupid idea for a party, and that I was a moron.”

“I realize it must have sounded like a ridiculous idea — having a birthday party for a dead baseball player,” Derry recalls. “I knew it’d be tough to get anyone to show up, but it just made sense to me. He loved beer. He loved hot dogs. He loved life. And I’m a huge baseball fan. It just seemed like a cool theme.”

In the intervening 29 years, the shindig has become the grand slam of Detroit baseball blowouts. It has also passed through a half-dozen locations, and now is eagerly anticipated each early February at Nemo’s Bar, where it has found a home since 2011.

Every year, Derry puts his collection of Ruth memorabilia up on the walls. While it doesn’t have any high dollar-value items, it is a lovingly assembled collection that shows off Derry’s fondness for the historic ballplayer.

“I don’t have the world’s most expensive collection of Babe Ruth memorabilia, just the most extensive,” Derry says. The keepsakes and relics include replicas of Ruth jerseys, and even quotes he has researched by and about the Sultan of Swat. It's an impressive array, sure to wow even those with just a passing familiarity with the icon of yesteryear.

‘Whose fucking birthday is it now?’
It all started back in the 1980s, when Derry was in his early 20s, living in Northwest Detroit. He and a friends were walking home from Jordan’s on the River when they saw a little joint on Grand River Avenue called Bar Thoms. Derry and his pals soon became the bar’s youngest regular patrons, befriending the old-timers who constituted most of the place’s clientele.

“There was Ethel Thompson, 80-some-years-old, behind the bar, and most of the people in there were in their 70s and 80s. They were really happy to see us come in there. What really made me love this bar so much was that great old jukebox, with all those big band classics. We just had a great time going in there, hanging out with the old-timers there, listening to this great old music.”

Among the hits of yesteryear on that Rockola 454 jukebox were 45s of songs by Glenn Miller, Benny Goodman, Tommy Dorsey, and Duke Ellington, but also a ridiculously corny selection for special occasions: a rendition of “Happy Birthday.” The song happened to drive bartender Thompson crazy, which made the rascally young Derry want to play it all the more. Over and over again.

“Ethel just hated it so much that I’d play it just to annoy her,” Derry confesses. “And Ethel would say, ‘Whose fucking birthday is it now?’”

It got to be such a running gag that Derry started bringing framed photos of his favorite ballplayers to answer to the question. Thompson would ask why this song was on again and Derry would pull out photo. “The old-timers got a kick out of it,” Derry says.

It put Derry in the position of planning out his trips to Thoms and getting his props ready. As he considered the upcoming birthdays in November 1987, he realized a Babe Ruth’s birthday was just a few months away.

And so Derry mailed out invitation to all his friends inviting them to come to Bar Thoms and celebrate what would have been Babe Ruth’s 93rd birthday.

“I didn't think anyone would show up,” he says.

The party got started a little late, but about a dozen of Derry’s friends showed up. Derry recalls, “We drank beer, and just had a great time, listening to those old tunes on the jukebox. We ate hot dogs, Baby Ruth candy bars, Cracker Jacks, peanuts, and birthday cake. It was perfect — magical, even. We had so much fun that I decided to invite everyone back to Ethel's bar a year later to celebrate Babe's 94th birthday.”

Ever since, Derry says, “my silly event has never changed. I just had so much fun at that first party, I decided to keep it going.”

A party on the move
In 1990, with the death of bar owner Ethel Thompson, Bar Thoms closed — but that didn’t stop Derry from keeping the party going. By then he was living in a rented house in Dearborn Heights and held the party at his home. He plastered the walls with Babe Ruth posters and memorabilia, prepared a menu of Cracker Jacks, peanuts, and frankfurters, and even set up the old Rockola jukebox he’d bought from the vendor when Bar Thoms closed.

“As I moved, over the years, and as the party grew in popularity, I changed the location of the venue several times,” Derry says. He brought the annual festivities to his new residence in Farmington Hills for a few years. For 15 years, Derry’s party had a home at Tom’s Tavern on the west side. Derry says the party simply got too big for the living room-sized bar.

“I probably should have moved the party sooner than I did,” Derry says. “I think when it comes to the point where you’re packing 100 people into a small place like that, you start to think that you should do the responsible thing — move to a larger location.”

Not such a dumb idea after all
As it turns out, the party many thought was downright stupid is having the last laugh. Not only has it caught on, if the weather is good, Derry estimates this year’s party could draw 1,000 guests.

And it makes sense: Who’s really going to question something as all-American as Babe Ruth: You might as well speak ill of Mom or apple pie.

What’s more, it’s a drinking party in early February, almost halfway between New Year’s Eve and St. Patrick’s Day. As anybody who’s been in town for a minute or two knows, Detroiters love any excuse to pop a cold one.

But if you think it’s just an oddball’s lark, consider this: Members of Babe Ruth’s family approve of the party and usually attend it. This year, guests will also include Ty Cobb’s granddaughter, Cindy Cobb, and Denny McClain.

Scholars say the Bambino hit his longest home run — 626 feet — from Detroit’s Navin Field. That field — today a field again — is practically across the street from Nemo’s, of course. And Derry points out that Ruth played some of his most exciting games at the ballpark, including pitching against Ty Cobb.

“He had a great time every time he came here,” Derry says of Ruth’s trips to Detroit. Derry points out that Ruth was an outdoorsman who liked to fish and hunt in Michigan, was familiar with the “mineral baths” in Mount Clemens, and palled around in Detroit with Harry “Slug” Heilmann of Tigers fame.

And, when you think about it, Babe Ruth’s career took off in 1914, the same year Ford Motor Company announced the $5 day. The meteoric rise of “the Babe” mirrored the rise of the Motor City, beginning the year job-seeking immigrants began streaming into Detroit from all over the country and the world. By the time Ruth finally hung up his cap for good, Detroit was a modern city, with its last vestiges of provincialism stripped away.

In a way, Babe Ruth and Detroit grew up together. 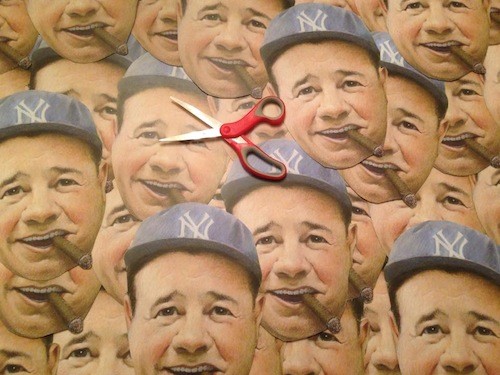 Baseball bringing us together
And Derry’s tribute, which has been going on for almost 30 years, is something to witness. Expect an a huge display — one big enough to take over an already- sports-themed environment. The walls of Nemo's will be covered with pictures, posters, and scads of quotes about “The Babe.” (The saucier quotes will be featured in the men’s room.)

A thousand balloons will fill the air. They’re prepared to make 714 hot dogs — one for each of the Sultan’s homers. Also, Derry and company will pass out Babe Ruth pins, as well as face masks — a gimmick that once caused a witty customer to remark, “I never saw so many babes in one bar!”

Derry says, “We will drink beer. We will swap old baseball stories. We will live large, just like the great Bambino. We will listen to music. We will eat hot dogs, Baby Ruth candy bars, and Cracker Jacks.”

And while it will draw fans of Babe Ruth from all over, it’s really Derry who remains at the center of the shindig. After all, it’s his party.

For his part, Derry is too humble to accept any accolades. He’d rather people just join the fun.

“I just chose an unusual theme,” he says, adding, “I don’t have a big party on my own birthday.”