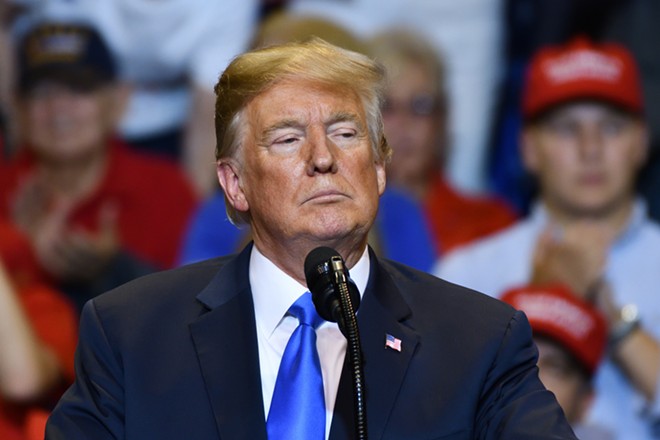 From the man who insists on referring to the COVID-19 as the “China virus” and who has downplayed the severity of the pandemic — even comparing it to the “common flu” just two weeks ago, while the coronavirus ravaged countries all over the world — President Donald Trump is now suggesting that medical ventilators are quickly being produced by automakers.

Last week, Trump signed the Defense Production Act, which would allow companies to shift gears and produce necessary, in-demand goods, like life-saving ventilators. These medical devices assist those who cannot breathe on their own by delivering air through a tube into the patient's lungs, which is vital to those with coronavirus, as COVID-19 attacks the respiratory system.

According to The New York Times, there are 170,000 ventilators in the US. However, the American Hospital Association projects that more than 960,000 people will require a medical ventilator during the pandemic. In New York, they have just 5,000 ventilators, while estimates point to needing close to 30,000 to properly combat the growing number of positive COVID-19 cases.

However, Trump has yet to actually invoke the act.

According to a tweet posted last week, Trump claims he will invoke the act only if we find ourselves hurtling toward a “worst-case scenario in the future,” you know, like right now.

I only signed the Defense Production Act to combat the Chinese Virus should we need to invoke it in a worst case scenario in the future. Hopefully there will be no need, but we are all in this TOGETHER!


During a briefing on Saturday, Trump claimed that he had conducted calls with General Motors, Ford, and “so many companies,” and said that these companies were currently in the process of making ventilators. Trump gave these companies the go-ahead to do so.

“Go for it auto execs, lets see how good you are?” he tweeted.

However, many of these companies have come forward and are offering their resources independently of Trump's greenlight. Manufacturing engineers at GM were already communicating with ventilator manufacturers before Trump's tweet, which has “baffled” the very companies he namedropped.

Ford, General Motors and Tesla are being given the go ahead to make ventilators and other metal products, FAST! @fema Go for it auto execs, lets see how good you are? @RepMarkMeadows @GOPLeader @senatemajldr


The Associated Press fact-checked the President's most recent claims and reveals that neither Ford or GM have started ventilator production and, if they did, they may not see results for months or longer, which may be too late to accommodate the impending medical supply shortage. Ventilators come with a hefty price tag, too. As The Washington Post reports, ventilators range from $25,000-$50,000 apiece. Not to mention there are rigorous testing and strict regulatory processes that ventilator production requires, which can take up to a year or more to be approved.

It should also be noted that the Defense Production Act is most commonly invoked to instruct companies to prioritize production contracts for goods it already makes, like medical supply companies. Outfitting auto manufacturing facilities with equipment needed to produce a product it does not normally produce may prove to be a lengthy process.

“You’re not going to take a car-assembly line and start making ventilators on it,” Carla Bailo, chief executive officer of the Center for Automotive Research in Ann Arbor told Bloomberg news. “It won’t make sense.”

Tesla and Space X CEO Elon Musk has also stepped forward to offer resources to combat the ventilator shortage, but he, too, is concerned with just how fast he can make it happen.

There's a shortage now, how many ventilators you making @elonmusk? https://t.co/hsaP9RMDZK


In an interview with Wired, Eric Gjerde, the chief executive of Airon Corporation, a small ventilator company, said he is overwhelmed with thousands of orders, which they are struggling to fulfill.

“Making ventilators is not a trivial process,” Gjerde said. “It’s just too dangerous to be thrown into the hands of people who don’t know what they’re doing.”

On Sunday, before Michigan Gov. Gretchen Whitmer announced she would be enforcing a statewide stay-at-home order in an attempt to slow the spread of COVID-19 and the strain on hospitals and supplies, she told Fox News that she and her administration were “actively trying to find ventilators” and “bring ventilators back online that perhaps were retired.”

“We anticipate an incredible need for ventilators, just as every other state's anticipating,” she said.

On Sunday, Michigan's number of positive coronavirus cases soared past 1,000. Sixteen people have died so far.