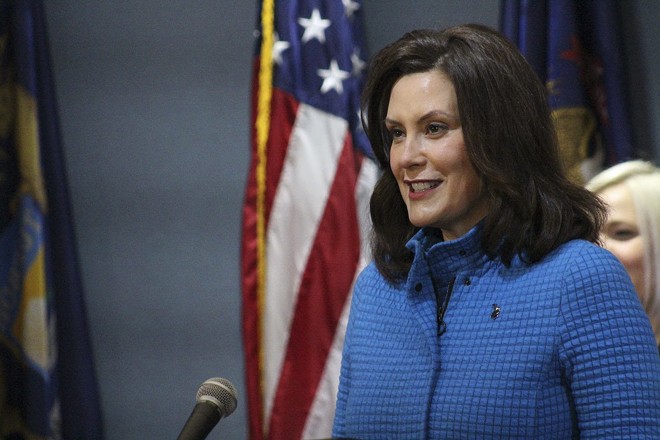 As the number of new coronavirus cases and deaths in Michigan continues to plummet, Gov. Gretchen Whitmer announced Monday that she’s relaxing some restrictions in northern part of the state.

Starting Friday, bars and restaurants will be allowed to reopen at 50% capacity in the entire U.P. and in 17 northern Michigan counties. The businesses must also provide COVID-19 training to workers, keep groups at least six feet from each other, and require servers to wear face coverings.

State of Michigan
The loosened restrictions were in regions 8 and 6.

“This is a big step, and it’s right before the holiday weekend,” Whitmer said at a news conference Monday. “I want encourage everyone to stay smart and stay safe. Keep your wits about you. Let’s not all go rushing out and force a closure eventually. We want to keep moving forward.”

By all measures, Michigan is gaining control of the coronavirus. The state reported 24 new coronavirus deaths on Monday, bringing its total to 4,915. In mid-April, the state was averaging 148 new deaths a day.

On Sunday, Detroit reported no new deaths for the first time since mid-March.

New coronavirus cases have also fallen dramatically, with 773 reported Monday, and 513 of them were in prisons. In the first week of April, the state was averaging nearly 1,300 a day.

Hospitals, which were overwhelmed in March and April, now have a lot more space. For 35 straight days, the number of COVID-19 patients in the hospital has declined, dropping from 3,636 on April 10 to 1,075 on Monday. During the same period, the number of people on ventilators has shrunk from 1,441 to 418.

The state has also significantly ramped up its testing capacity. In the past week, the state averaged more than 16,400 tests a day, compared to 5,700 a day in April. The goal is to reach 25,000 tests a day, which will enable the state to more quickly identify outbreaks.

Whitmer was vague about her plans to lift restrictions in other parts of the state, saying she’s keeping a close eye on the numbers.

“Please keep staying safe at home,” Whitmer said. “If we keep doing what we have been … we can begin thinking about reengaging sectors in the lower parts of our state.”

Dr. Joneigh Khaldun, the state’s chief medical executive, said the stay-at-home order “has worked, and thousands of lives have been saved.”

“Let’s all continue to use caution so that we do not see a second wave of cases and deaths,” Khaldun said.