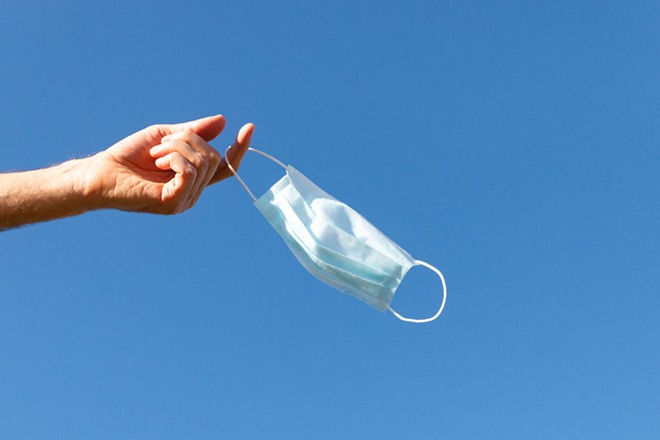 Shutterstock
A Howell woman took aim at anti-mask nurses who spread misinformation about COVID-19 and the effectiveness of face coverings at local board meetings.

A Trump-adoring sheriff in Michigan is pursuing criminal charges against a Howell woman who called out anti-maskers on Twitter, drawing sharp criticism from legal experts.

Livingston County Sheriff Mike Murphy investigated the tweets and handed the case over to prosecutors in hopes of initiating charges against Kasey Helton.

Activists and legal experts were aghast at the sheriff's actions, saying he is attacking Helton’s free speech rights.

In the tweets, Helton took aim at anti-mask nurses who spread misinformation about COVID-19 and the effectiveness of face coverings at local board meetings.

In one of the tweets, Helton pointed out that one of the self-described registered nurses, who insisted masks collect “poop” and other bacteria, appears to work at St. Joseph Health. At a Brighton Board of Education meeting, the woman said she’s “absolutely, unequivocally, 100% against masking our kids.”

Kasey posted a video of the woman speaking at the meeting and wrote, “I’d like you to meet Nurse Rebecca Skoczylas … who spread misinformation” at a school board meeting.

In another tweet, she referred to one of the nurses as a “dangerous RN sponsored by Schoolcraft College” and a “pathetic purveyor of health misinformation.”

None of the tweets contained a threat.

The Livingston County Sheriff Department has filed a criminal complaint against me related to the Twitter posts I made this week about the nurses who publicly spread health misinformation. (THREAD)


Nevertheless, the sheriff is asking a prosecutor to charge Helton with a felony count of posting a threatening message through an electronic medium.

“Our discourse in the United States is becoming less and less recognizable,” Tank says. “It’s kind of extraordinary to me. What are they? Thought police?”

Tank says the sheriff’s office is opening itself up to a lawsuit for trying to chill Helton’s free speech rights.

Murphy defended his decision to seek charges against Helton, telling Deadline Detroit that someone felt “legitimately threatened, harassed and intimidated,” adding, “We felt the same way.”

Murphy is a Republican who campaigned for former President Donald Trump.

When Helton revealed that she was being investigated on Twitter on Monday, lawyers responded that the case was an absurd attack on Helton’s free speech rights.

“Every single one of the tweets in question is undeniably protected by the First Amendment, and (the sheriff’s office) should know its role and shut its mouth if it doesn’t want a First Amendment lawsuit on its hand,” Ari Cohn, a free speech lawyer, tweeted.

“You reposted their own public statements, it's their words that caused public outrage, and your reposting/amplification is not a crime,” McStay tweeted. “You committed no crime, and a first year public defender can win this.”

Progress Michigan, a progressive advocacy group, filed a Freedom of Information Act request with the sheriff’s office and prosecutor’s office on Wednesday for communication related to the case.

“Based on what we know, we are very concerned these charges represent a direct attack on the people’s right to free speech. We believe the public has a right to know what prompted these charges because as far as we know, tweeting about public information is not a crime,” Lonnie Scott, executive director of Progress Michigan, said in a statement. “We want law enforcement in Livingston County to know that Progress Michigan and a lot of other folks across Michigan are paying attention to this and won’t stand by while our constitutional rights are trampled on, nor will we watch idly as law enforcement uses underhanded tactics to intimidate and silence those they disagree with.”