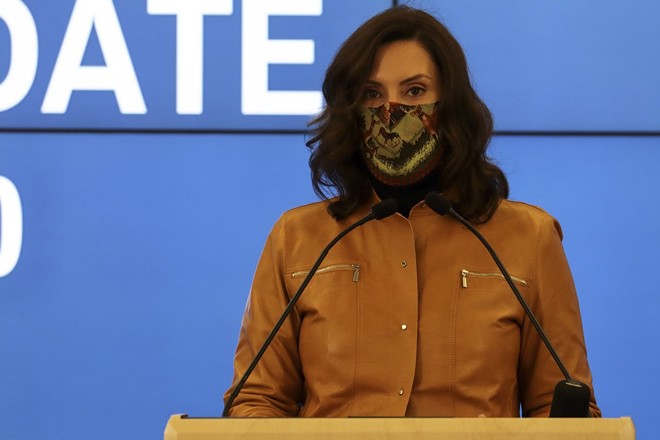 Atlas, a radiologist with no background in public health, made no mention of the record number of daily coronavirus cases in Michigan.

“The only way this stops is if people rise up. You get what you accept. #FreedomMatters #StepUp,” Atlas said in a tweet Sunday night.

The only way this stops is if people rise up. You get what you accept. #FreedomMatters #StepUp https://t.co/8QKBszgKTM


His incendiary tweet came a little more than a month after state and federal authorities arrested more than a dozen men accused of plotting to kidnap Whitmer.

“We know that the White House likes to single us out here in Michigan, me out in particular. I’m not going to be bullied into not following reputable scientists and medical professionals,” Whitmer said on CNN on Sunday. “I listen to the people that actually have studied and are well-respected worldwide on these issues, not the individual who is doing the president’s bidding on this one.”

“This statement is disappointing, irresponsible, and the reason why the US finds itself in such desperate circumstances regarding COVID-19,” Nessel tweeted. “I look forward to a new federal administration that works with our state government to protect Michigan residents.”

“Rise up” was trending on Twitter as thousands of people slammed Atlas for his irresponsible remarks.

“The only thing I feel good about here is knowing you will go down in history as a psychotic imbecile whose incompetence killed 100s of 1000s,” best-selling author Kurt Eichenwald responded. “You will be condemned as the [Wilmer] Krusen of our age. But you are so ignorant about pandemics, I’m sure you have no idea who Krusen was.”

Wilmer Krusen was the infamous Philadelphia health commissioner who allowed a deadly parade to proceed in the midst of the 1918 flu pandemic.

A few hours after his initial tweet, Atlas insisted he was not advocating violence.

“Hey. I NEVER was talking at all about violence,” Atlas tweeted. “People vote, people peacefully protest. NEVER would I endorse or incite violence. NEVER!!”

The only way this stops is if people rise up. You get what you accept. #FreedomMatters #StepUp https://t.co/8QKBszgKTM


The number of daily coronavirus cases has surged in Michigan, hitting a record high of 8,516 on Friday. Whitmer and state health officials warned that hospitalizations are on the rise, and the death toll could reach more than 100 a day by the end of the year.