The final flight of Martin McNally

The hijacker from Detroit left St. Louis with a fortune — but it all slipped from his grasp somewhere over Indiana 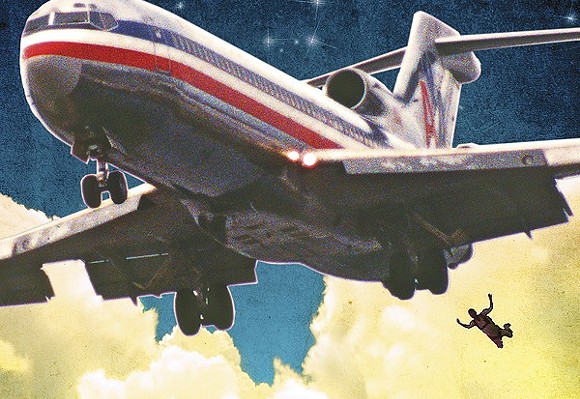 Finally alone after 11 hours of feverish demands, threats and hostage exchanges, the hijacker pulled off his shaggy brown wig and began to disrobe. He shrugged out of a burgundy sport coat, white dress shirt, and yellow trousers — it was, after all, 1972 — revealing a second outfit: a set of dark-colored slacks and a collared blue T-shirt. Upon surveying the rows of empty seats running the length of the Boeing 727, he checked his wristwatch. Only a few hours remained until sunrise.

It was after 3 a.m. on June 24, and the purloined aircraft was hurtling through a cloudy night sky, heading for the Canadian border.

The hijacker, Martin McNally, was 28 years old, but with his boyish face and near-smirk, he could pass for a teenager. He scooped up the discarded clothing and walked to the rear of the pane, arriving at the open hatch and extended stairwell. He stared into the murky darkness below.

There was still time to call it off, McNally thought. He could turn around, walk back to the cockpit, and hand his rifle to the pilot. He could return the bag stuffed with $500,000 in cash and then, somehow, talk his way out of the mess he'd left back in St. Louis. He could tell the FBI agents there was never any bomb on the plane, that it was all joke.

McNally tossed the wig through the hatch, followed by the clothing, several smoke bombs, and the rifle with its two loaded cartridges. The items whipped into the air and disappeared. This was no time for second thoughts.

Aside from a single hostage, McNally was now the only non-crew member left on the flight. Hours before, on the tarmac at St. Louis' Lambert International Airport, he'd negotiated to release more than 90 passengers in exchange for a fresh crew to fly him to Toronto — a city McNally had no intention of visiting. Soon after takeoff, he'd ordered the sole remaining American Airlines stewardess (through whom he had relayed all of his demands) to join the hostage and flight crew in the cockpit.

Now, McNally's only companion was the thrilling weight of a cash-heavy mailbag tied to his left belt loop.

After strapping on a pair of flight goggles, McNally donned a reserve parachute and tightened the straps around his legs and chest, just as he'd been instructed by an FBI agent during an on-the-spot lesson earlier that evening. McNally had never touched a parachute before. This would be his first jump.

Slipping a handgun into his pocket, he descended the stairs haltingly, on his butt, scooting down step-by-step into the roar of the wind. He turned onto his stomach and caught one last look at the rear hatch leading into the passenger cabin; he imagined how easy it would be for someone on the plane to walk back here and shoot him in the head.

McNally's hands were the only things keeping him connected to the plane. His body, suspended from the stairwell at 300 miles per hour, felt like a daisy caught in a hurricane.

In the cockpit, the remaining crew felt their ears pop as the cabin pressure fluctuated.

One thousand feet above the Boeing 727, from the vantage point of a military surveillance plane, an FBI agent observed a small, dark object falling rapidly from the rear hatch.

McNally dropped like a bullet, feet first, and the first thing he perceived was the wind punching his flight goggles into his eye sockets. In seconds, the goggles were violently ripped from his head. McNally threw out his arms, bringing his body parallel to the ground as he began counting down from 20 in his mind. Basing his calculations on the formula for terminal velocity — which he'd learned in a library physics textbook — McNally figured this would be enough time to slow his fall to a safe speed. If he pulled the chute too early, he knew, the air would shred the canopy like tissue paper.

The time came to test his math. McNally fumbled for the ripcord with his right hand, but he made the mistake of leaving his left arm outstretched. Instead of producing the serene, deliberate movements of an experienced skydiver, the wind took hold of his arm and slammed him into a furious spin.

In the midst of the chaos, the parachute exploded out of the chest harness and ejected its spring-loaded contents directly into McNally's face. Blinded and hurting, he managed to grab hold of the shroud lines above him. He tugged hard, and was rewarded with resistance as the canopy filled with air.

McNally was going to live after all. His hand strayed down to his left thigh, hoping to be reassured by its half-million dollars.

He could only look down in horror. The mailbag was 20 feet below him, and getting smaller and smaller by the second. As if in a dream, McNally watched the fortune tumble in slow motion, end over end, until it slipped below the clouds and vanished.

Forty-four years later, on a sweltering afternoon in August 2016, Martin McNally enters the Thomas F. Eagleton U.S. Courthouse in downtown St. Louis. He rides an elevator to the second floor and checks in at the front desk of the federal probation office.

Clean-shaven, his white hair combed and slicked back from his forehead, the 72-year-old ex-con is anticipating good things from a scheduled meeting with a federal parole supervisor. Five years out of prison, McNally is now permitted to apply for release from his permanent parole, a status that saddles him with travel restrictions and random checkups. The meeting could set the wheels of true freedom in motion.

By the time McNally had been released from a California prison in 2010, he had already spent more than half his life behind bars. He then settled into an apartment in south St. Louis, where he subsisted on disability benefits linked to an old Navy injury.

McNally's first decade as inmate had been marked by violence and multiple failed escapes. He was involved in numerous scraps with prisoners, and, although never convicted, he was twice brought up on charges for assaulting guards in the U.S. Penitentiary at Leavenworth, Kansas. In one instance, he was accused of wielding two sharpened pencils as shanks.

"My first 10 years, those were turbulent, no question," McNally says, making conversation in the parole office waiting room. "The guards at the U.S. Penitentiary in Leavenworth were brutal. They beat up and assaulted prisoners; they killed prisoners. So yes, there were assaults on guards, there were indictments."

By the early 1980s, McNally had calmed down a good deal. He dedicated much of the next three decades to appealing his conviction for air piracy. He became a proficient jailhouse lawyer, ran for president, and accrued more than $10,000 by illicitly trading Wall Street stocks.

At the courthouse in St. Louis, McNally waits an hour before he and his local parole officer are beckoned into the conference room to meet the supervisor.

The meeting lasts under 30 minutes, and it doesn't look good. During the meeting, the local officer testifies it would be best to keep McNally on parole indefinitely.

On the drive back to his apartment, McNally unleashes a stream of curses, mostly directed at the parole officer.

"I would recommend retaining him on parole," McNally quotes, sneering his impression of the testimony, "because of the nature of this crime."

Fuming, he says, "Yeah, no question, I'll be on parole until I'm dead."