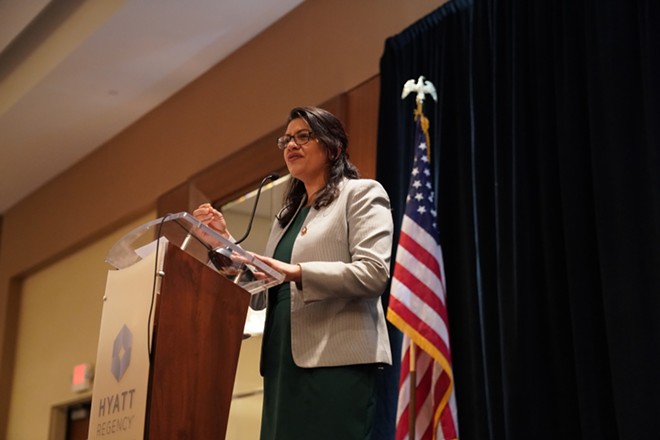 First introduced last April at the outset of the pandemic crisis, the Automatic BOOST to Communities (ABC) Act would immediately provide $2,000 payments to all U.S. citizens, followed by $1,000 recurring monthly payments for one year.

"It's time to get people recurring, direct payments," Tlaib says during a Zoom conference call on Tuesday. "It's time to pass the ABC Act. Other countries have been able to provide much more clearer, sustainable relief. So it's very important that we step up and push for something that is meaningful like this."

Jayapal calls the most recent federal relief legislation, the American Rescue Plan, "a very important first step, a crucial down payment on the stimulus funding that's needed to fully recover from this crisis."

"People need to know that they can not only survive, but actually thrive. The ABC Act delivers them exactly that," she says. "Our legislation acknowledges that a one-time survival check is not enough to get people through the crisis. Instead, we'll send out recurring checks every month during the crisis and for a year after it ends. That is money in people's pockets, that is certainty in their lives." The ABC Act would also provide payments to immigrants, and would create an Emergency Responder Corps to reach out to vulnerable communities to make sure they have access to the direct payments.

Tlaib and Jayapal say the ABC Act would be funded directly from the Treasury with no additional debt by minting two $1 trillion platinum coins, and additional coins as needed.

Yes, you read that right: the legislation calls for minting of two actual $1 trillion coins, which would then be transferred to the Federal Reserve, adding $2 trillion to the Treasury's account to be used to issue debit cards to every U.S. Citizen. The strange loophole would create funds for the ABC Act without taking on new debt.

The concept of minting coins to pay off the national debt was first popularized in 1992 by Populist Party presidential candidate Bo Gritz. It was revived by the U.S. debt-ceiling crisis in 2011 and again last year, when Tlaib first introduced the ABC Act.

Asked if she was worried about creating inflation that could harm the vulnerable communities she was trying to protect, Tlaib says she's more worried about the cost of poverty.

She adds, "The ABC Act is putting a mirror up to our nation and explaining to folks that we need a people's bailout. We need to talk about the fact that the pandemic has left people with no access to resources, to not only take care of their families but really be able to get into a mode to be able to come out of poverty."

The crisis started before the pandemic, she argues.

"Many [people] were living check-by-check prior to the pandemic," she says. "So imagine those checks stopped for months in some cases, and for some, they haven't even got that check."

Jayapal says that the level of devastation facing people across America is "intense": One in seven families don't have enough to eat, more than 8 million people have been pushed into poverty, and nearly 1 million new people are filing for unemployment every single week.

"That's 51 straight weeks of incredibly high unemployment claims, on top of the more than 75 million people who already lost their jobs, and historic levels of job loss have also led to millions of people losing their health care," she says. Last week, Jayapal and Michigan U.S. Rep. Debbie Dingell re-introduced a Medicare for All Act to provide universal health care to all Americans.

Tlaib says now that the Democrats have a narrow control over the Senate, recurring payments have a higher possibility of passing.

"When you see other nations doing their part and understanding that it was a crisis before the pandemic, a poverty crisis," she says. "And now this has just exacerbated it."