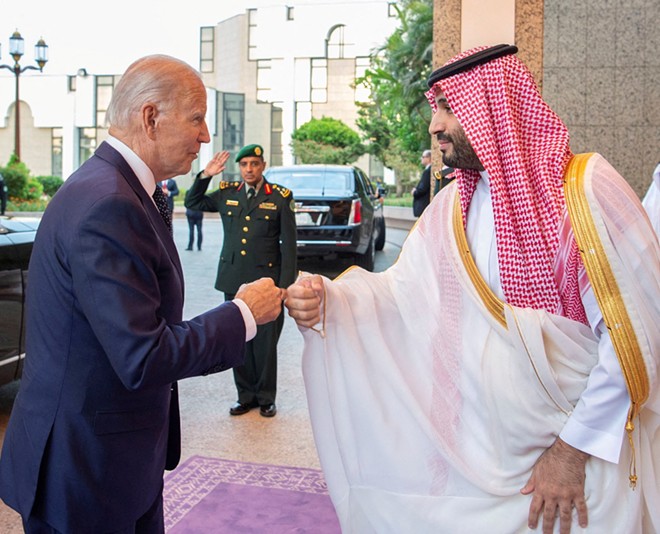 Of particular note was an awkward fist bump Biden shared with Saudi Arabia’s Crown Prince Mohammed bin Salman, or MBS, whom Biden labled a “pariah” on the campaign trail in 2020 for his role in the brutal murder and dismemberment of Washington Post columnist Jamal Khashoggi. But MBS wasn’t the only despot Biden met. He also exchanged a warm handshake with Egyptian dictator Abdel-Fattah el-Sissi. Sissi came to power in a military coup against Egypt’s only democratically-elected president, Mohamed Morsi, who died in an Egyptian prison cell a few years later. And don’t forget the leadership of Israel who have been supporting the expansion of an illegal occupation of Palestinian land and whose security forces killed Palestinian American journalist Shireen Abu Akleh.

How uncommon is it for an American president to meet with a crown prince who murders and dismbembers journalists, a military dictator who came to power in a coup d’état, or leaders of a government expanding an illegal occupation? Well, it’s par for the course for American presidents. The fact that Biden met with each is only odd in the context of his willingness to state that he would not while running for president.

Yet that dap he gave MBS hits different this time. Because this time, the context here at home has fundamentally changed. In President Biden’s choice words, the “battle for the soul of America” is playing out in two-hour blocks as the Jan. 6 committee meticulously unwinds the events of the day Americans launched a full frontal attack on their own democracy.

Make no mistake, Americans have been attacking democracy for a long time now, whether the average American understood it or not. American largesse was built, in part, on the subjugation of national wills abroad. In his excellent new book Gangsters of Capitalism, journalist Jonathan M. Katz details the exploits of decorated Marine Major General Smedley Butler as he inflicted America’s will on native peoples in Cuba, China, the Philippines, Nicaragua, Panama, Haiti, Honduras, and beyond. Even early in his career he became jaded by the role that American “wildcat” capitalists played in leveraging American politics to ensure their money-making schemes were backed by America’s war machine. Reflecting back on his 30 years, he said: “I spent most of my time being a high-class muscle man for Big Business, for Wall Street and for the bankers. In short, I was a racketeer for capitalism.”

Butler had become so adept at decimating democracies abroad that when a junta of business leaders hatched a plot in 1934 to overthrow FDR, they naturally approached him as the man to lead their effort. America’s own democracy was where he drew the line, and he did all he could to ultimately foil the plot. Get this, that “Business plot,” as it came to be known, was to start with a fascist march on Washington. It took 86 years for just such a fascist march on Washington to take place. And right now, Americans are digging through the aftermath.

For many Americans, the Jan. 6 insurrection finally broke the mental firewall that they had erected between what America did abroad and what Americans did at home. They are, indeed, one and the same.

As if to put the split screen Americans are watching in stark relief, consider a recent CNN interview: Donald Trump’s erstwhile National Security Advisor John Bolton was discussing the Jan. 6 insurrection on CNN with anchor Jake Tapper. Tapper, remarking on Trump’s foibles in planning the Jan. 6 assault on our democracy said, “One doesn’t have to be brilliant to attempt a coup.” To which Bolton interjected, “I disagree with that. As someone who’s helped plan coups d’etat — not here, but, you know, other places…”

Jake Tapper: "One doesn’t have to be brilliant to attempt a coup."

John Bolton: "I disagree with that. As somebody who has helped plan coup d’etat, not here, but other places, it takes a lot of work." pic.twitter.com/REyqh3KtHi

One of the most powerful former foreign policy officials in the American government admitted openly to helping plan coups d’état while discussing a coup against his own country by the very president under which he served! And then, only two days later, the president who unseated him was dapping a despot he said he’d make a pariah.

Americans are reeling from the toxic after-effects of the anti-democratic poison we’ve been pushing for so long abroad. Watching our president peddle it now reminds us how vulnerable we — and the rest of the world — remain.

Originally published July 19 in The Incision. Get more at abdulelsayed.substack.com.