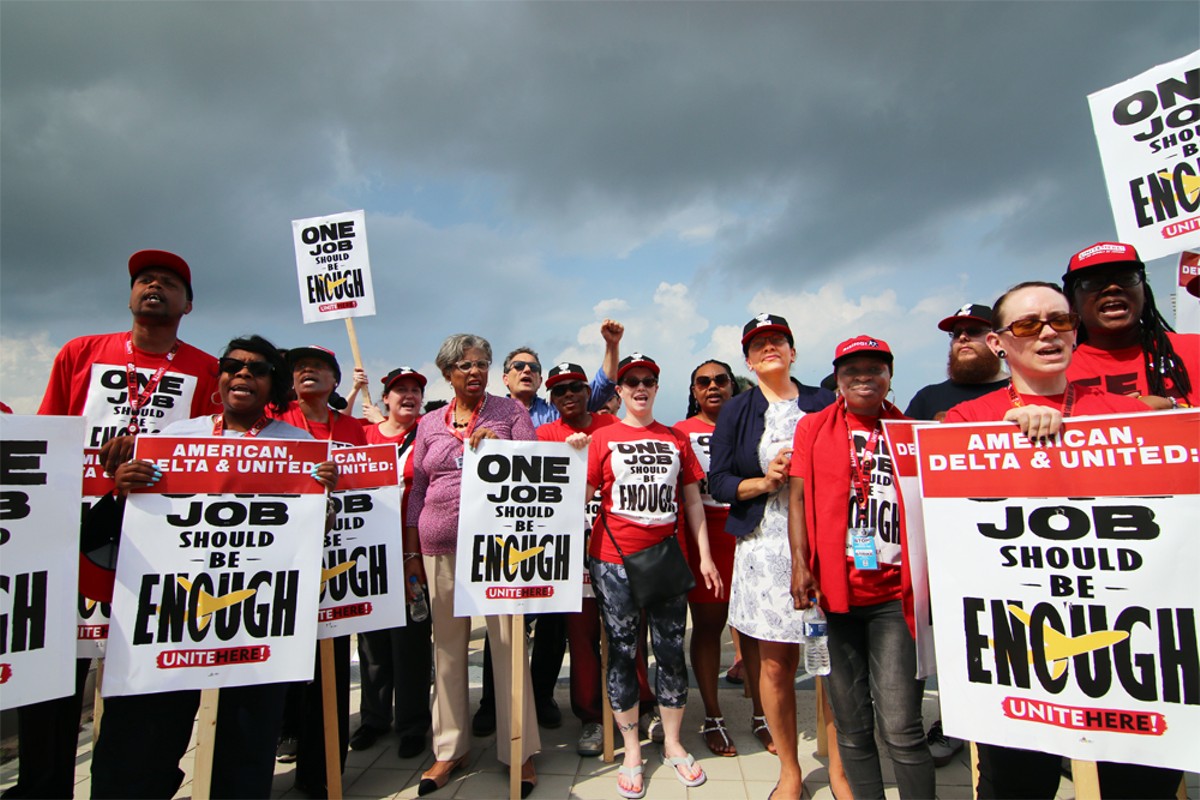 Last month, hundreds of airline catering workers at Detroit Metro Airport voted overwhelmingly to authorize a strike when released by the government. In taking this vote, Detroit airport food workers joined thousands of their sisters and brothers at 30 hub cities in sending a message to the airline industry that they're ready to strike as soon as it becomes lawful to do so. (Caterers and other airline workers are covered by the Railway Labor Act, which prevents them from striking without permission from the National Mediation Board. UNITE HERE — which solely represents 11,000 airline catering workers at LSG Sky Chefs — asked for formal approval on July 26 to be released from mediation. If approved, the union would be allowed to strike.)

These brave working people spend hours on their feet every day in industrial kitchens, often in temperatures either frigid or sizzling, to make sure passengers of airlines such as American, Delta, and United have an enjoyable onboard experience that includes food and beverages. Their labor is integral to helping keep a multi-billion-dollar industry in flight. These workers are important. They are worth more than what they currently earn. And they deserve equality with others in the airline industry.

As the Democratic presidential hopefuls, staffers, supporters, and press fly through Detroit this week, they may eat meals or have a beverage supplied by an airline catering worker represented by my union, UNITE HERE Local 24, who took part in last month's vote. And though airline catering workers aren't the people moderating the debates on CNN, they have questions of their own they'd like to ask the candidates.

Will the Democrats join them in demanding that One Job Should Be Enough and call on the airlines such as American to end low wages and unaffordable health insurance?

Many DTW airline catering workers must work multiple jobs to support their families. Take Shandolyn Lewis, for example. After eight years of working hard to ensure American, Delta, and United Airlines' flights run smoothly at one of the most important hub airports in the U.S., she still struggles to afford health insurance to cover her 12-year-old daughter Ariana's chronic asthma. Shandolyn isn't the only one struggling to afford quality health care for her family. In DTW's kitchen, less than half of the workers have the company health insurance, and fewer than 16 percent have a child or family member covered.

Will the Democrats tell the CEOs of American, Delta, and United that it's not OK that workers who have made meals for airline passengers for over 30 years still make less than $15 an hour?

With 74 percent of DTW airline food workers making less than $15 an hour (some making as little as $11.25), none can afford to make ends meet. This is a crisis of poverty wages and unaffordable health care, and it's unacceptable that an industry making billions of dollars in profits would turn its back on a group of workers who make it possible for flights to get off the ground.

As President Trump constantly attacks working people, Black and brown workers like Shandolyn who make up most of the airline catering workforce won't stop fighting for change in 2020 and today. And to beat Trump, Democrats must lead in Michigan, and across the U.S., by telling American, Delta, and United Airlines it is not OK that workers making meals for their flights earn as low as $11.25 an hour in Detroit; it's not OK that hard-working single mothers like Shandolyn drown in medical bills while paying $100 per week for the company's health insurance plan while American, Delta, and United Airlines made a combined $50 billion in profit over the last five years; it's not OK that one job isn't enough to survive in Detroit — or anywhere in the U.S.

I guarantee that Detroit airline catering workers and thousands more UNITE HERE members are ready to do whatever it takes to be heard to win changes that make a real difference in their lives. Workers like Shandolyn Lewis can't wait forever for a fair deal. She has bills to pay now. She needs good, affordable health care now.

When I think about all the candidates, these Democratic hopefuls flying through Detroit Metro Airport on planes serviced by the labor of UNITE HERE Local 24 members, the most important question we want to ask is:

What do the Democrats see as their role in resolving this labor dispute and pushing the airline industry to end the crisis of poverty wages and substandard health care once and for all?

Nia Winston is the President of UNITE HERE Local 24.