The invasive spotted lanternfly is spreading across the U.S. 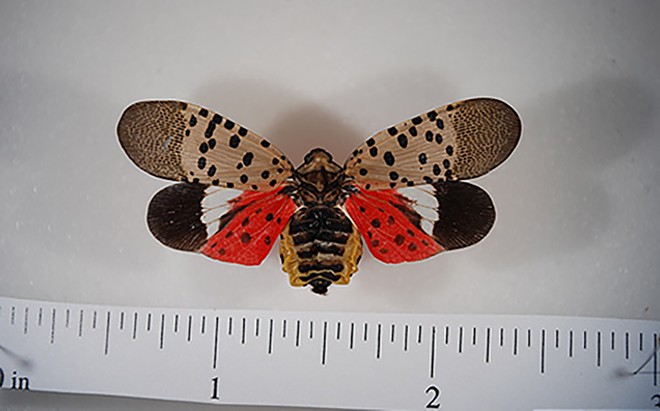 If you see this beautiful red, white, and black polka-dotted insect — kill it, Michigan officials say.

It’s a spotted lanternfly (Lycorma delicatula), an invasive species from Asia that has been spreading across the U.S. since 2014. The first Michigan sighting of the insect occured in Pontiac last week and was confirmed Thursday by the United States Department of Agriculture.

The lanternfly is a type of insect known as a planthopper. Officials believe it hitched a ride on nursery stock brought from an infested state and could have been in Michigan for several months at this point.

Officials say if it spreads in the state, it could be devastating to Michigan’s grape industry. In addition to grapes, spotted lanternfly feed on the invasive tree of heaven, aka the “ghetto palm” (Ailanthus altissima), as well as black walnut, river birch, willow, sumac, and red maple trees.

When feeding, it produces a sticky liquid called honeydew that can collect on the ground and can discolor and kill nearby plants.

The insect changes appearance during its life cycle, ranging from blob-like egg masses, a black white-spotted beetle that later turns red, and the winged adult form. 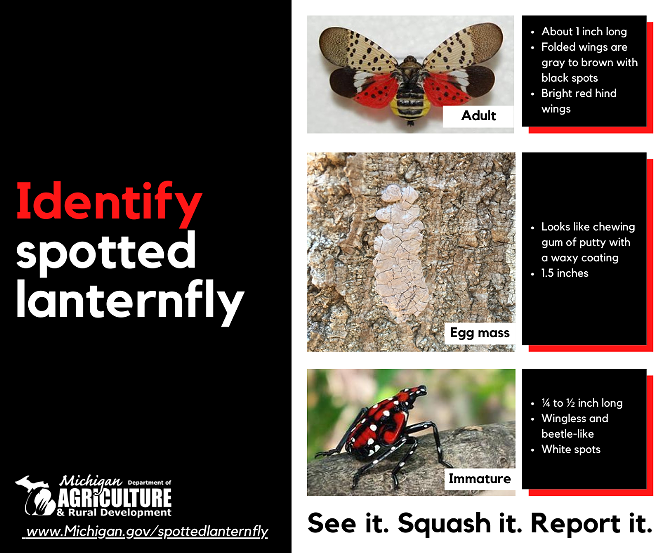 Michigan Dept of Agriculture & Rural Development
The stages of the spotted lanternfly.

If you see one, officials want you to take a photo, noting the date, time, and location of the sighting, and report it to its Eyes in the Field website.

Then kill it, they say.

If you see a mass of eggs, scrape it off into a bag of hand sanitizer or rubbing alcohol to kill them.

The insects were first detected in the U.S. in southeastern Pennsylvania, and have since been seen in Connecticut, Delaware, Indiana, Maryland, Massachusetts, New York, North Carolina, Ohio, Pennsylvania, Virginia, and West Virginia.

Michigan Department of Agriculture and Rural Development Pesticide and Plant Pest Management Division Director Mike Philip says it might be too late, however.

“We are in the assessment stage of response, but it is important to note that typical pest management techniques have not proven effective for eliminating the pest in other states,” he said in a statement.

More information is available at michigan.gov/spottedlanternfly.

Leyland "Lee" DeVito grew up in the suburbs of Detroit, where he read Metro Times religiously due to teenaged-induced boredom. He became a contributing writer for Metro Times in 2009, and Editor in Chief in 2016. In addition to writing, he also supplies occasional illustrations. His writing has been published...
More
Scroll to read more Michigan News articles
Join the Metro Times Press Club