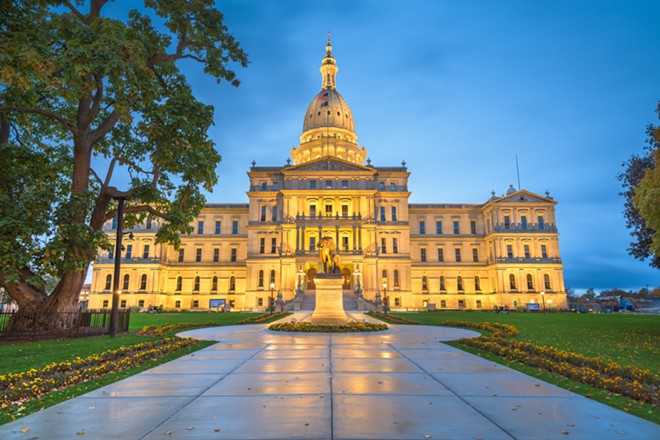 Republican leaders in Michigan denounced the numerous death threats made against Gov. Gretchen Whitmer ahead of an armed rally planned for Thursday in Lansing.

"These folks are thugs and their tactics are despicable," Senate Majority Leader Mike Shirkey, R-Clarklake, said from the floor Tuesday, The Detroit News reports. "It is never OK to threaten the safety or life of another person, elected or otherwise, period."

Shirkey added, "The moment an individual or group embraces the threat of physical violence to make a point is the moment I stop listening."

The remarks come a day after Metro Times revealed paranoid and violent rants posted on several private Facebook groups, where users called for Whitmer to be hanged, beaten, shot, and beheaded. Some of the threats came from people who said they are bringing guns to Thursday’s rally, "Judgement Day," to protest Whitmer's stay-at-home order, which has driven down the coronavirus infection rate.

“We haven’t had any bloodshed yet, but the populous [sic] is counting to three, and the other day was two,” Dave Meisenheimer wrote on Michiganders Against Excessive Quarantine, which has more than 385,000 members. “Next comes watering the tree of liberty with the blood of tyrants.”

Shirkey, however, said he did not support calls by Democrats to limit guns in the Capitol and instead said the onus is on authorities to arrest anyone who brandishes a firearm in a threatening way.

Sen. Mallory McMorrow, D-Royal Oak, said Tuesday that she’s worried that protesters want to spread “blood on the front lawn of this building.”

"That is damn intimidating," she said. "That is intimidation, and it is not welcomed. My question back is, 'What the hell are we going to do about it?' Or do we wait until something happens?"

“Our nation works because Americans can come together and peacefully discuss our disagreements,” Cox said. “While people have the right to protest and express their views, violence and intimidation have no place in the American system and the Michigan Republican Party condemns any individuals who are resorting to such tactics.”

During a news conference Monday, Whitmer called on Republicans to speak out against the threats and stop using inflammatory rhetoric that encourages residents to defy her social-distancing measures.

"This could be avoided if Republican leadership in the Legislature would step up and denounce that kind of activity," Whitmer said. "I ask anyone with an office or a title or a platform uses it to help bring down the heat in our state. We’re making progress."

"I disagree with many of the governor’s decisions," Chatfield tweeted. "I’ve been very open about that. I also support the right to protest. But as I’ve said before, those making physical threats (to both parties) are out of line and should be punished. It’s despicable. It’s wrong. It needs to stop."

I disagree with many of the governor’s decisions. I’ve been very open about that. I also support the right to protest. But as I’ve said before, those making physical threats (to both parties) are out of line and should be punished. It’s despicable. It’s wrong. It needs to stop.