Whitmer has until Monday to veto or sign the bill 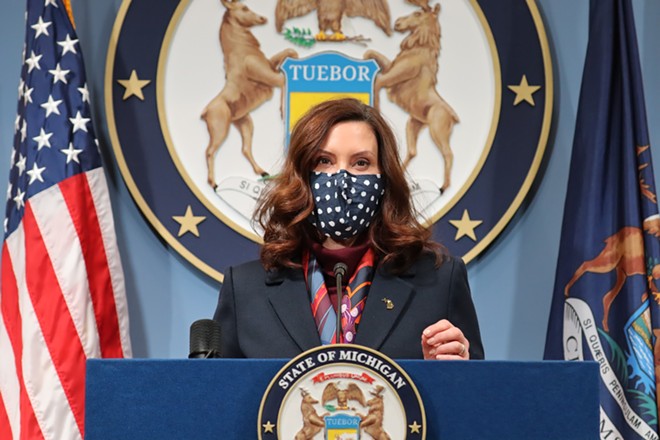 Dozens of groups are calling on Gov. Gretchen Whitmer to veto a proposed tax cut by Republican lawmakers, saying it would predominantly benefit the wealthy and come at the expense of critical services.

The $2.5 billion proposal approved by the Republican-led Legislature would cut personal and corporate income tax rates and create new tax credits for retirees and children.

In a letter on March 9, the Michigan Association of Police Organizations (MAPO), which has 10,000 members, urged Whitmer to veto the bill, saying it would reduce police protection and create “long-term budget problems.”

“While our members appreciate tax relief as much as the rest of Michigan’s citizens, this bill goes too far and will only add to the challenges facing law enforcement in Michigan,” MAPO President Rob Figurski wrote to Whitmer. “We encourage you and the Legislature to sit down and reach agreement on a package of spending and tax cut that will not lead to significant job and benefits cuts in law enforcement and will make much needed investments in retention, training and recruiting.”

If approved, the bill would cut the personal income tax rate from 4.25% to 3.9%, increase the amount of tax-free retirement income, and reduce the eligibility age for tax deductions from 67 to 62.

But the plan disproportionately helps the state’s wealthiest residents, who would receive a nearly $5,000 rebate, while lower-income families would receive an average of $12.

If the plan passes, the House Fiscal Agency warned that the state may be forced to return more than $1 billion in federal COVID-19 relief funds because it prohibits using the aid for tax cuts.

“Wealthy Michiganders are already paying far less than their fair share,” Eileen Hayes, executive director of Michigan Faith in Action, a statewide organization of faith communities, said in a statement. “If you make $500,000 a year in Michigan today, you’re contributing less to our public services than you would if you lived in 39 other states. We should be talking about raising taxes on the wealthy, not cutting them.”

In a letter to Whitmer, the Michigan Nurses Association called the plan “short-sighted and reckless,” saying it would “gut our state’s resources on the backs of working people and struggling families.”

“Registered nurses and healthcare professionals are committed to safe, healthy communities in which everyone can succeed and strive toward a better future,” the association wrote. “The legislation to give wealthy individuals huge tax breaks puts those goals at risk for our state.”

The Michigan League for Public Policy (MLPP) said the tax plan is “unsustainable” and would create a serious budget deficit at a time when residents are in critical need.

“The tax cut bill would eliminate billions of dollars from the state budget immediately and have a permanent negative impact on our ability to invest in Michigan’s futures,” MLPP wrote to Whitmer. “In the immediate sense, these costs will require the state to either cut public services we all rely on or risk losing vital federal aid provided under the American Rescue Plan Act, dollars intended to help struggling workers, families and businesses recover from the economic impacts of the pandemic. Long term, it would result in drastic budget cuts, meaning larger classroom sizes, increased barriers to healthcare access, and more potholes leading to higher car repair bills.”

Whitmer has until Monday to veto or sign the bill. She has not publicly indicated what she plans to do.