Many of the Republicans running for local, state, and federal elections in Michigan this year continue to peddle conspiracy theories about widespread election fraud 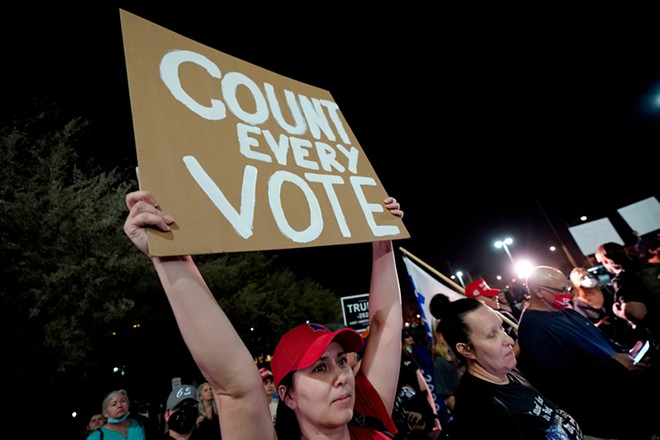 Attempts by former President Donald Trump and his supporters to overturn the 2020 election is likely just the beginning of unprecedented attacks on democracy in Michigan unless the Republicans are held accountable.

That’s according to a national election expert, state lawmaker, and former head of the Michigan GOP.

“When you have a president who seeks to stay in power despite losing an election, that is an attempt to install a dictatorship,” Noah Bookbinder, president of Citizens for Responsibility and Ethics, said at a news conference Thursday. “That’s what was happening here, and the threats are ongoing.”

Many of the Republicans running for local, state, and federal elections in Michigan this year continue to peddle conspiracy theories about widespread election fraud. The danger is that Republicans who lose in this year’s elections will falsely claim they were victims of voter fraud, rather than concede, a centuries-long tradition in any democracy.

Jeff Timmer, who served as Michigan Republican Party Executive Director from 2005 to 2009, said he never dreamed that his former colleagues would disregard election results at the risk of undermining democracy.

When he was the executive director of the party, he said, “it never dawned on anybody to deny the reality of what happened in a campaign by refusing to accept the results.”

“Democracy only works if everyone who participates in it believes in it,” he added.

The fear that Republicans will continue to undermine future elections inspired state Rep. Joe Tate, D-Detroit, to introduce a bill last week that urges the Department of Justice to investigate his Republican colleagues for attempting to overturn the 2020 presidential election “for the crime of seditious conspiracy.”

Last year, 11 Republican state legislators violated federal law by conspiring to overthrow the government and delay the execution of laws, he said. Five of the lawmakers tried to enter the state Capitol building so a group of Republicans could fraudulently cast their electoral college votes for then-President Donald Trump.

In December 2020, the 11 Republican lawmakers signed on to a baseless lawsuit filed by Texas that sought to challenge the election results in several states, including Michigan, even though they knew Biden fairly won the election, Tate contended.

“My 11 Republican colleagues in the House committed crimes,” Tate said. “It’s plain and simple. Some of them (conspired to overturn the election) at our own state Capitol in broad daylight in clear view of the media and the world. In these moments, they brazenly betrayed their oath to serve the public. Each of these lawmakers knew what they were doing. They knew they were working to overturn a free and fair election to keep their corrupt, former president in power."

He continued: "Defending the votes and the rights of Michiganders means prosecuting these 11 representatives.”

“All five of the (gubernatorial) candidates have signed on publicly, emphasized in their debates and public appearances, this notion that there was rampant election fraud, that the election was stolen and that we need to take all these drastic measures to prevent this election fraud in the future,” Timmer said. “It’s all centered around lies and delusions. It’s the driving force for the Republican candidates.”

Trump and his supporters have convinced Republican voters that the election was stolen by Democrats, undermining people’s faith in democracy, Timmer said.

“If you take a contrary position, you really are a nonstarter as a candidate,” Timmer said. “You have no traction. No voters in the Republican Party seemingly will pay attention to you. You have no chance of winning an election unless you’re a supporter of the Big Lie. The abnormal has become the normal.”

Because of the damage to democracy, doing nothing is not an option, Tate said.

“For us to not look into this, it reduces the faith and confidence in our election system and democratic institutions,” Tate said.