Decades-long Devil's Night is dead in Detroit, with fires disappearing on Halloween Eve 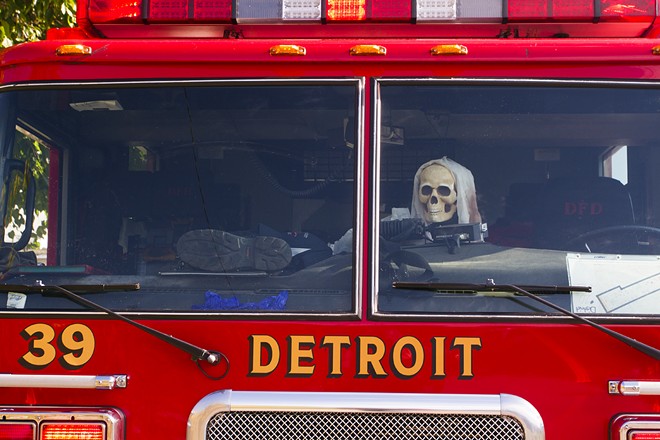 For decades in Detroit, Halloween Eve was synonymous with fire.

Photographers from around the globe flocked to the city to witness what became known as Devil’s Night, the notorious tradition of setting fire to houses, buildings, carsm and dumpsters.

Between 1979 and 2010, more than 100 fires broke out each year. The worst year was 1984, when firefighters responded to more than 800 blazes that covered the entire city in an eerie, smoky haze on Halloween morning.

Over the past nine years, the fires steadily declined.

For the second year in a row, Devil’s Night was nothing more than an average night for firefighters on Wednesday. Only seven fires broke out, and some were accidental, Detroit Deputy Commissioner Dave Fornell tells Metro Times.

“There is going to be a new generation of kids who remember Halloween as dressing up and getting candy,” Fornell says. “The city is changing.”

On Halloween evening, firefighters will be handing out candy at fire houses.

In 2017, after Devil’s Night fires reached a record low, Mayor Mike Duggan ended Angels’ Night, the mobilization of thousands of volunteers to patrol the streets so residents could focus on the positive festivities of Halloween.

The exact origin of Devil’s Night in unknown, but the phrase dates back to at least the early 20th century when pranksters rang doorbells, soaped windows, and stole buggies.

Since the 1910s, fires have been a part of the Halloween tradition in Detroit. Students at the former Detroit College of Medicine used to set large bonfires in the streets and even handed cigars to arriving firefighters. In 1935, then-Detroit Police Commissioner Heinrich A. Pickert threatened pranksters with jail.

“The starting of bonfires is a dangerous thing; the pulling of fire alarm boxes is a serious thing; the rubbing of soap on show windows and doors or windows of automobiles or making scratches with sharp instruments on buildings are expensive tricks and those caught in such acts will be sent to the nearest station,” Pickert told The Detroit Free Press.

In 1995, the number of fires declined to 158. That downward trend continued and never stopped.

It’s unclear what snuffed out the notorious tradition. It could be attributed to fewer houses and buildings to burn, a strong presence of police, volunteers, arson investigators, and ATF agents, and a disregard for the mischievous tradition.

And the fires haven't just disappeared on Devil’s Night. Overall, the number of fires so far this year has declined 17 percent compared to the same period in 2018.

With more time on their hands, firefighters are responding to medical runs.

“The average time to get medical care is actually better than the national average,” Fornell says.