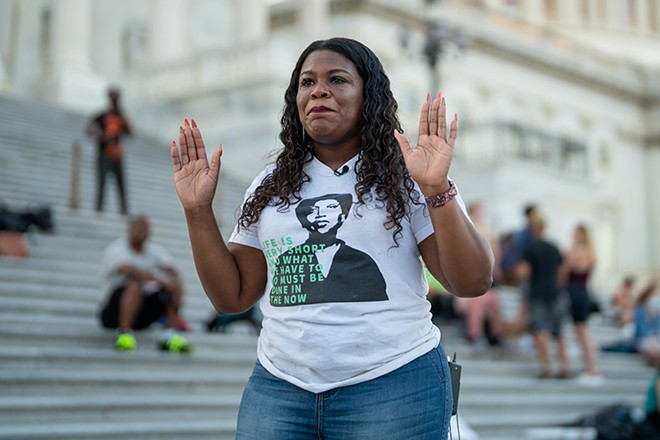 I watched the returns from Ohio’s special election from a watch party for Abdullah Hammoud, the Michigan State Representative who took nearly 50% of the vote in a six-way primary for Dearborn mayor. Abdullah is the real deal — a progressive rooted in the fabric of his community who understands how to frame broader issues in the language Dearborners use every day. He’ll face off with the second-place finisher in November.

But Ohio’s special election to fill the seat of former Congresswoman Marcia Fudge, who is now the secretary of the Department of Housing and Urban Development, was a gut punch. Nina Turner, former Cleveland City Councilwoman and Ohio state senator, was also co-chair of Bernie Sanders’ 2020 campaign. She is an outspoken advocate for Medicare for All, a Green New Deal, and universal pre-K through college. She’d raised over a million dollars in just six weeks from announcing her candidacy, and was up by 35 points on her opponent in polls as late as June. She was endorsed by Cleveland Mayor Frank Jackson, as well as the Cleveland Plain Dealer newspaper.

Like any campaign, there were mistakes. After a Turner surrogate antagonized South Carolina Congressman Jim Clyburn, he threw his endorsement behind her opponent, triggering a windfall of moderate Democratic support. The Congressional Black Caucus and its PAC began campaigning against Turner. Some of her comments in the 2016 and 2020 presidential campaigns were taken out of context and hung around her neck.

And then it got downright brutal. A shadowy super PAC called the Democratic Majority for Israel, who spent millions to defeat Sanders during the 2020 presidential primary, put up nearly $2 million in attack ads against her. The Third Way, the Democratic arm of corporate America, kicked in another half million.

Understanding the opposition to Turner goes beyond her role as Sanders’ most ardent and visible field general. It goes beyond comments she’s made in the heat of previous campaigns. It goes back to something more fundamental. And to understand it, you need to go to Washington — to the steps of the Capitol, in fact.

That’s where Congresswoman Cori Bush held a five-day sit-in, fighting for an extension on the nationwide eviction moratorium her colleagues had let sunset despite rising COVID caseloads around the country. Rep. Bush, surrounded by a coterie of other progressive lawmakers and activists, forced the Biden administration and the Democratic-led Congress to face the shame of allowing millions to be evicted from their homes in a pandemic.

And she won. Though the administration had previously claimed its hands were tied, they announced a new eviction moratorium, albeit more limited than the first.

I had the opportunity to interview Rep. Bush on my podcast. And what strikes you about her most of all is that she’s an organizer at heart. She’s unbothered by the traditional niceties that seem to hamstring so many in her office. If it’s not serving the People, it’s not working for her either. So she bucks tradition in favor of transcendent leadership.

Rather than deal with another Cori Bush or another AOC or Ilhan Omar, or Bernie Sanders for that matter, folks like the Democratic Majority of Israel and Third Way would rather head them off at the pass. Outcomes like Cori Bush’s victory is why they were so committed to Nina’s loss.

But watching the joy on the faces of dozens of volunteers, staffers, and organizers who helped make Abdullah Hammoud’s victory possible, it’s clear to me that while Big Money can try to shut down campaigns like Nina Turner’s, they can’t shut down the oncoming wave of young people who are demanding leaders like Cori Bush and Nina Turner. It’s only a matter of time.

A version of this story was originally published Aug. 5 in The Incision. Get more at incision.substack.com.

Dr. Abdul El-Sayed is a physician, epidemiologist, public health expert, and progressive activist who served as Detroit’s health director and ran for governor in 2018. He is the author of Healing Politics: A Doctor's Journey Into the Heart of Our Political Epidemic and Medicare for All: A Citizen's Guide, as well...
Read More about Abdul El-Sayed
Scroll to read more Informed Dissent articles