‘Make some noise to save Livernois!’ 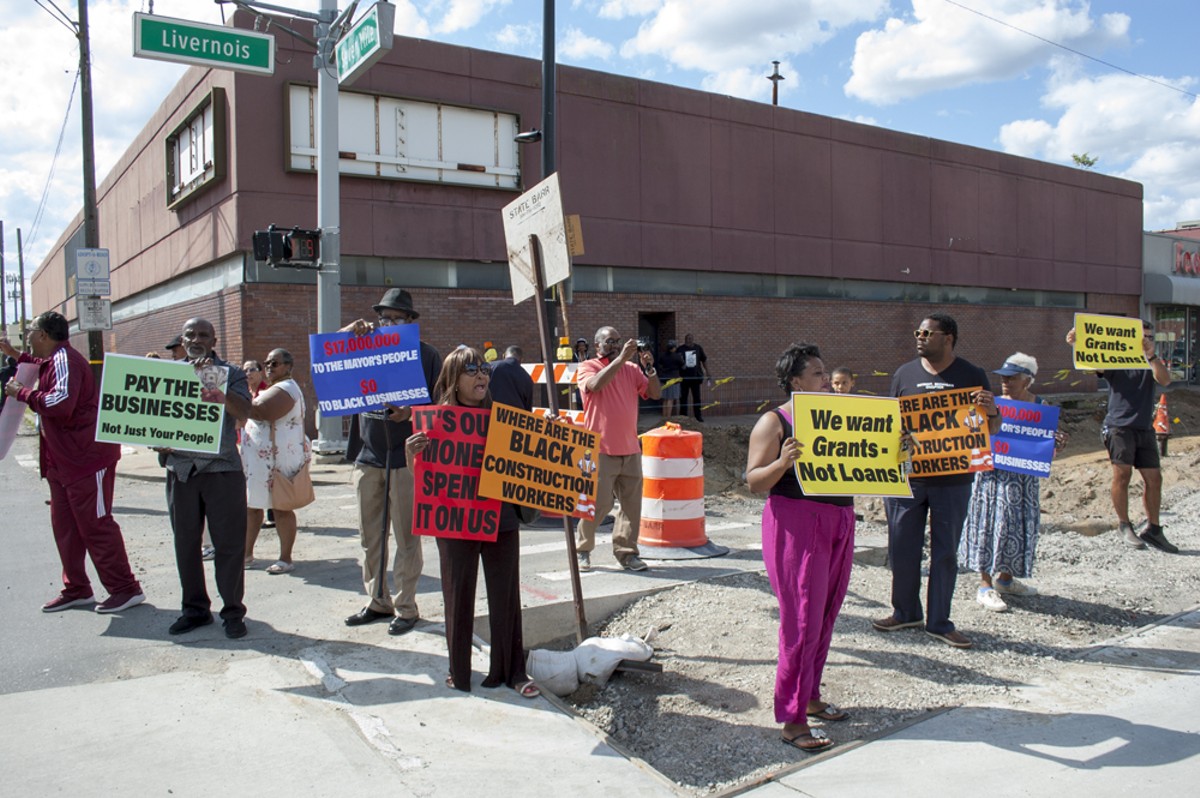 Last Thursday, a group gathered at the intersection of Livernois Avenue and Seven Mile Road along Detroit's historic Avenue of Fashion, where a road construction project that began in May has reduced the thoroughfare to just one lane in each direction for more than a mile, and completely eliminated roadside parking.

With traffic backed up for blocks, the group shouted, "Make some noise to save Livernois!" — which generated a steady stream of horns blaring in solidarity. Other chants included "It's our money, spend it on us!", "We want grants, not loans!", "Where are the Black construction workers?", and "Pay the businesses, not just your people!"

The project, a $17 million renovation, promises to radically transform the district. An architectural rendering provided by the city shows wide, tree-lined sidewalks that include a dedicated bike lane, lots of hip-looking pedestrians, and streetside cafes. For now, though, wide stretches of the street look more like the surface of the moon.

And some of the more than 150 businesses along the strip say they feel blindsided by the scope of the project, which is choking off commerce and calls to mind the long construction period for the QLine streetcar, which caused consternation for some businesses in Midtown and the North End. Table No. 2, a new upscale restaurant, opened its doors in April, just weeks before construction began. Kuzzo's Chicken and Waffles, one of the strip's anchors, announced last month that it would close through the end of November, when the bulk of the project is expected to wrap up. Other businesses like Narrow Way Café & Shop have said they may temporarily close as well, and several new businesses have delayed opening until construction is completed. In response, the City announced — a day before the protest — a proposed loan program to help businesses weather the construction.

But Rev. Horace Sheffield, who organized the protest, says it's not enough.

"It's gone on too long, it's going to last too long, and it's too little, too late," he says. "It's just a travesty. It's like giving them a bone as opposed to a steak."

At the protest, Sheffield took to the megaphone to rile up the crowd, evoking the decimation of the city's historic Black district of Black Bottom, which was cleared in the name of urban-renewal projects.

"This is clear what's going on," he said. "I had an uncle who had a business on Hastings Street when I was a kid. I would go over there and get all kinds of toys and whatever. Then one day I went there and it was gone."

He says he's skeptical about the project's narrowing of a major thoroughfare, as evidenced by the backed-up traffic during construction. He says he's also skeptical of the city's push for bike lanes and pedestrian-friendly districts — pet projects of Detroit Planning Director Maurice Cox, a New York City native who announced last month that he was resigning in September to head to a similar role in Chicago.

"Most people don't realize it who aren't from Detroit, but Detroiters are in love with their cars," Michael says. "With one lane, we're talking about a more walkable neighborhood. That would work in a more high-density city, but in Detroit, as you see, these retail stores are mostly one-story high. In other communities, they've got four, five, or six stories above them, and so you've got your customer base. We don't have that. The customers that we have are actually driving in from other parts of the city."

The Avenue of Fashion is the highest concentration of Black-owned businesses in the city.

Kim Tandy, the District 2 manager from Mayor Mike Duggan's office, maintains that local businesses and citizens were kept in the loop since construction was first announced three years ago, an effort that included multiple community outreach meetings and flyers. In fact, the final design, she says, was voted on by the businesses.

"Livernois is about to have probably one of the premier bike lanes in our region," she says. "I haven't seen anything like this anywhere else." Unlike other bike lane projects around the city, Livernois won't have the plastic white bollards, which Tandy says some Livernois businesses found to be unsightly. Some stretches of the sidewalk will have brass letters inset into them, telling the history of the Avenue of Fashion.

Tandy says the project removes a controversial median that has been a point of contention ever since it was added to Livernois 13 years ago, with businesses as well as police and fire departments voicing concerns because motorists had to drive too far to do a Michigan U-turn. Tandy says trees along the side of the road were blocking business signage, and the sidewalks were in need of repairs.

She also defends the choice to narrow the avenue. "Parallel parking does not disrupt parking," she contends. "It actually disrupts parking less than angled parking [spots] because you don't [pull] out into traffic." The push for bike lanes, she says, is part of a wider nationwide conversation about diversifying mobility options. Indeed, the results of a survey of more than 3,000 metro Detroiters conducted by the Southeast Michigan Coalition of Governments released last month found that a majority of respondents would like to walk or bike more, but a lack of sidewalks and bike paths prevents them from doing so.

"Everybody's not necessarily [able to rely] on a car," she says. "Bikes are something that have come up a lot, and that there's been a lot of bike accidents and those kinds of things in our city because we did not have protected bike lanes."

Tandy says the project was originally supposed to be completed in sections over the course of two years, but that the business owners said they didn't feel that they could weather it. Instead, a plan for one year of "intense" construction was chosen, especially considering a big DTE Energy infrastructure project last year.

Still, Tandy concedes that the project is harming businesses more than what was anticipated. "We were thinking, everybody, you know, gets affected by construction about 20 percent," she says. "This one has hit some 40, 50, some even 70 percent."

“Make some noise to save Livernois!” Business owners and other members of the community protesting construction on Detroit’s Avenue of Fashion. Since construction began in May, businesses along Livernois have struggled due to reduced parking and blocked roads. Protesters say a recently announced loan program isn’t doing enough to save the businesses. #detroit #livernois #avenueoffashion

She says the city has set up sandwich boards that note that businesses are open during construction, and is running a free shuttle between noon and 7 p.m. each day. And she says the loan program, administered through the Detroit Economic Growth Corporation, is actually rather generous: Businesses can borrow up to $20,000 at zero percent interest, they don't have to start making payments for a year, and up to 60 percent of the loan is forgivable.

But some business owners say they're hesitant to spend even more money after already being dealt such a heavy financial blow. A man who just goes by Fel'le, the owner of Fel'le Art Gallery, says he's wary of "jumping in bed with the city" after the way he's been treated already.

"It's been a nightmare, to be honest," he says. "When they first started doing construction in May, they didn't even create any entrances to the businesses. So when you start that way, it's letting me know that the businesses [weren't] even a concern from the beginning."

"It's like a double whammy," says Mary Bird, who also works at the gallery. "You know, we're already in the red because of the construction, and then on top of that to have another financial obligation paying back something we never would've had to get involved with — it's just debt on top of debt."

In the meantime, citizens are taking matters into their own hands. "Cash Mobs" are planned for the first Friday of every month, encouraging people to patronize businesses along the avenue from 4 p.m. to 8 p.m. The annual Light Up Livernois block party — set for noon to 10 p.m. on Saturday, Sept. 28 and hosted by Design Core Detroit as part of its Month of Design programming — will also help bring visibility to local businesses.

Michael, the president of the Avenue of Fashion Business Association, says he's trying to remain optimistic.