The bills specifically target the Detroit Zoological Society and the Detroit Institute of Arts, which receive a portion of their funding from a millage levied on homeowners in Wayne, Oakland and Macomb counties 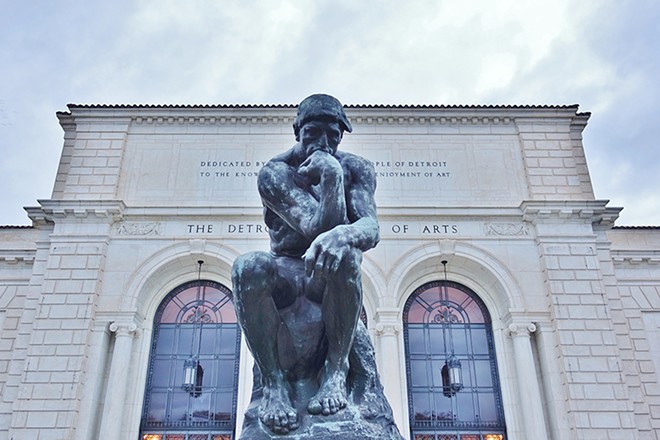 EQRoy / Shutterstock.com
"The Thinker" sculpture by Auguste Rodin ponders outside the Detroit Institute of Arts.

A pair of GOP-sponsored bills would seek to bring the organizations that operate the Detroit Zoo and Detroit Institute of Arts under the authority of both the Open Meetings Act (OMA) and the Freedom of Information Act (FOIA).

The bills specifically target the Detroit Zoological Society and the Detroit Institute of Arts, which receive a portion of their funding from a millage levied on homeowners in Wayne, Oakland, and Macomb counties. Currently, the millage funds are collected by authority boards in each of those counties, which then pass the dollars on to the institutions themselves.

However, while the various authority boards are subject to the OMA and FOIA, the institutions that receive those dollars are not.

Speaking on Tuesday to a meeting of the Senate Oversight Committee, Runestad questioned if that amounted to sound fiscal management.

“They meet three times a year and say ‘We’re going to pass the money on.’ Well, okay, that’s fabulous information, but what happens with the money once it’s at the two institutions?,” he asked. “So this $22 million dollars for the DIA and $5.8 million for the zoo, it’s public money. How does it get spent? We don’t know.”

Runestad said the issue is about transparency and that the authorities are designed for one purpose; to collect the millage proceeds and pass them on to the zoo and the DIA, which are designated as private entities.

Runestad dismissed the idea that the institutions are a vendor of the various taxing authorities, saying that unlike other organizations which can seek bids from a variety of providers, the Detroit Zoo and the DIA are the sole beneficiaries of the millage funds.

Johnson similarly testified to the panel that the institutions are receiving substantial taxpayer funding, but are lacking transparency through what she called a “loophole” in the law. While the Oakland County Zoological Authority collected $5.8 million dollars in property taxes in Fiscal Year 2021, it only spent $12,500 on an audit, accounting and miscellaneous expenses.

“It’s very difficult in my mind to make sense of the fact that when voters in Oakland County support $5.8 million dollars in property tax millage for the zoo, government tells them that they can only FOIA the $12,500. That means 98% of the money is not FOIA-able. That’s just not right.”

Sen. Jeff Irwin (D-Ann Arbor) questioned if by adding the Detroit Zoo and DIA to the OMA and FOIA would also then open up other quasi-governmental arrangements like the senior service millages in many Michigan counties that raise public tax dollars and then provide them to private nonprofits.

“When we start to subject private corporations to OMA and FOIA, it’s an interesting road to go down that I think opens up a lot of boxes, some of them owned by Pandora,” said Irwin. “I’m just trying to be careful about how far we go with this and just, like I said, put on the table some questions. It’s concerning how far we go with this to take a private entity and make it public through government action.”

Also testifying was former state Rep. Kirk Profit, who is now a lobbyist with the Lansing-based firm Governmental Consultant Services Inc. He spoke on behalf of the institutions and told the panel that the bills in question were not warranted, saying they have enjoyed between 70 and 80% of voter approval and are already transparent.

“We don’t achieve that kind of level of support without being exactly who those constituencies want, which is extremely transparent,” he said. “When you come to us, you don’t have to lawyer up. What’s happened with FOIA and Open Meetings Act in so many cases throughout the state, and good legislation, but it took the government and statutory requirements to force sunshine. You don’t have to force sunshine with us. We do it because it’s demanded by the constituency and we do it because we embrace it.”

Committee Chair Ed McBroom (R-Vulcan) asked how the public could be assured that there was not an improper use of funds without the oversight that OMA and FOIA would bring, to which Profit again pointed to the overwhelming support the millages have received.

“Mr. Chairman, I would submit to you that the voters are the ultimate oversight,” he said.

“I’m subject to that same thing, too,” McBroom responded. “But the citizens have the ability to come in and look intimately at how we’ve appropriated funds and where it’s gone and what bills and laws we’ve passed. Do the voters have that same access point to what the Zoological Society is doing with its taxpayer dollars?”

“If there’s stuff people want, give us a call,” said Profit. “We’ll put you together with the authority members, with the zoo, with the DIA, with whoever you want to talk to. It’s really very easy compared to what would happen if you throw it into FOIA and OMA, and then you’ve got to do all the lawyering stuff.”

The Michigan Legislature is not subject to FOIA. The committee did not take action on the bills.

Originally published May 11 by Michigan Advance. It is republished with permission.