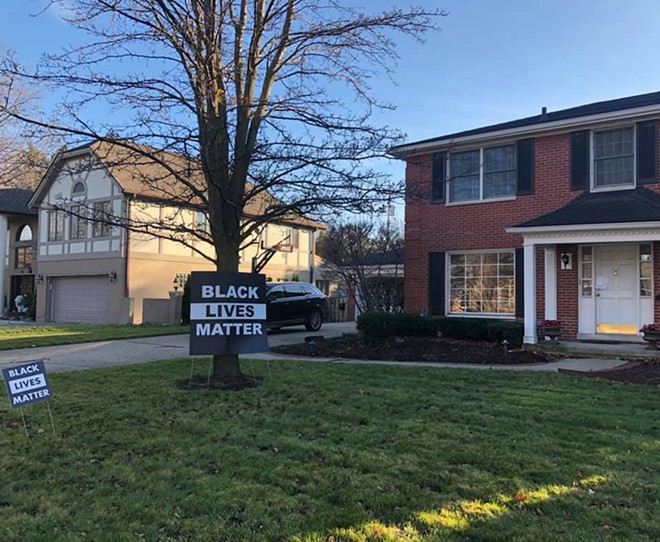 A Black Grosse Pointe Shores attorney was hit with a ticket from the city for failing to comply with a local ordinance regarding a Black Lives Matter sign he posted on a tree outside of his home.

According to the city, the sign exceeds the maximum size allowed for signage. However, Todd Russell Perkins claims the ordinance doesn't apply to his sign and has leveled allegations of racism against the city's attempts to mute his message.

“I'm not not conforming with the law,” Perkins told the Detroit Free Press. “If you read the local ordinance it says seven square feet for a political candidate or ballot initiative. It doesn't speak to my sign.”

And according to Article VII, Sec. 40-331 of Grosse Pointe Shores' Environmental Regulations, Perkins is not wrong, as Black Lives Matter does not apply to a political candidate nor “the passage or defeat of ballot issues.”

The city also says a sign must not exceed seven square feet nor can it be located near a “right-of-way line” or “front lot line to the setback of the building.” Per the regulations, a lot cannot have “more than one sign for any single candidate or issue” and all signs must be removed within five days after their respective election date.

Received an ordinance violation for this - in Grosse Pointe Shores!! They believe that this is a political statement and...


Perkins first fixed his sign to a tree in October and, following inclement weather which blew the sign down, on Nov. 20 he reinforced the sign so that it would hold more permanently, the Freep reports. It was after Perkins reattached the sign to the tree that a complaint was filed and was investigated. A police report followed.

Though Perkins says he didn't see the police report for a week, it stated that he had just two days after it was filed to remove the sign or bring it up to code — meaning, make it smaller. If not, he would be hit with a ticket, which he received on Nov. 24.

Interim City Manager Thomas Krolczyk says Perkins' violation has nothing to do with race or the content of his sign. Krolczyk claims Perkins only received the ticket because of the sign's size.

“It wasn't anything else,” Krolczyk told the Freep.

Over in Grosse Pointe Farms, two sign-related citations have been issued in the past six months for signs in residential areas that exceeded six square feet, including a Black Lives Matter sign and another in support of President Donald Trump.

“The city always attempts to resolve sign ordinance infractions prior to issuing citations, and in most cases, informal discussion is successful in assuring compliance with the ordinance,” Grosse Pointe Farms City Manager Shane Reeside said.

“We live in a society that is systemically racist,” Perkins said. “The system of racism is at play. It doesn't mean all the actors are bad.”

Perkins is prepared to hire a lawyer to fight the violation, refusing to be “silenced.”