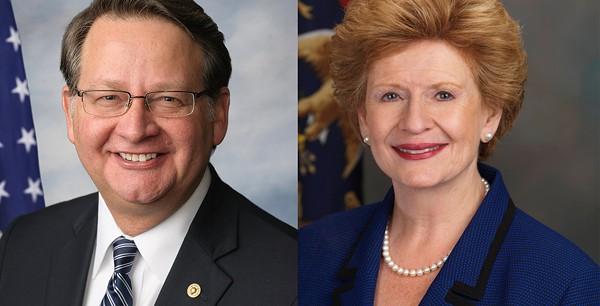 U.S. Rep. Rashida Tlaib made headlines in December when she and another rep became the first members of Congress to publicly support the BDS (Boycott, Divestment, Sanctions) movement targeting Israeli companies.

Tlaib, the nation's first Palestinian-American Congresswoman, is part of the party's most progressive wing. It generally supports the international boycott movement designed to hit Israel over its ongoing occupation of the Palestinian territories, which has effectively turned them into prisons.

Meanwhile, at the other end of the spectrum in Michigan's Democratic Party, centrist senators Debbie Stabenow and Gary Peters — who both receive a lot of money from the pro-Israel lobby — cosponsored a constitutionally questionable anti-BDS bill.

The Intercept reports, the Michigan senators' legislation would have, among other things, given state and local governments "explicit legal authority" to boycott U.S. companies that are participating in BDS.

In other words, the government could punish those with whom it disagrees.

The bill died in December at the end of the last legislative session, but Sen. Marco Rubio last week introduced a similar bill. The proposed federal law is an effort to strengthen similar state laws already on the books. Michigan is one 26 states that made it illegal for the government to do business with companies or individuals who boycott Israeli companies. Peters also cosponsored a bill that would've outright criminalized supporting BDS.

But the laws also create an awkward situation since Tlaib is part of the government and an outspoken critic of Isreal. (For the record, Tlaib is also a critic of Muslim states that commit human rights abuses.)

"We cannot have policies that punish people for taking action," she said. "Imagine the further harm it would have caused if the federal government banned civil rights leaders from boycotting buses in Montgomery, Alabama, or banning divestment from Apartheid South Africa.

"Limiting the ability of the people to peacefully organize and partake in direct action to fight against persecution and discrimination is not only barred by the U.S. but is fundamentally un-American."

Indeed, while punishing American citizens and businesses for speaking out against a foreign nation's government is ludicrous on multiple levels, it's also a flagrant violation the First Amendment's free speech protections, as two federal judges have already struck down similar laws.

So why would Stabenow and Peters cosponsor legislation that puts a foreign government over Americans' constitutional protections?

Money could have something to do with it. According to Open Secrets, the pro-Israel lobby has given nearly $900,000 to Stabenow during her career. That includes about $164,000 during the 2018 election cycle. Similarly, Peters took in around $374,000 from the lobby during his career, and he appears to be a fan of the American Israeli Public Affairs Committee.

Stabenow didn't respond to a request for comment, and a spokesperson for Peters only "he will not be voting to proceed with any bills until there’s a vote to re-open the government."

If of laws seem largely symbolic, think again. A speech pathologist in Texas recently lost her public school job after she refused to sign an oath pledging loyalty to the Israeli government. Hurricane Harvey victims similarly had to sign Israeli oaths before they could receive aid from the state of Texas. Others in Kansas Arizona have lost jobs for not signing loyalty oaths.

"In the midst of a partial government shutdown, Democratic and Republican senators have decided that one of their first orders of business should be to sneak through a bill that would weaken Americans' First Amendment protections. The bill, Combatting BDS Act, encourages states to adopt the very same anti-boycott laws that two federal courts blocked on First Amendment grounds. The legislation, like the unconstitutional state anti-boycott laws it condones, sends a message to Americans that they will be penalized if they dare to disagree with their government. We therefore urge senators to vote no on the Combatting BDS Act next week."

And though the legislation has bipartisan support, it also has bipartisan opposition. The conservative National Review denounced a previous version of the bill as “so mind-bogglingly stupid that it’s hard to know exactly what to say about it,” adding that the bill “penalizes political beliefs and so is both unconstitutional and unconscionable.”

This isn't, however, the first time Peters and Stabenow joined forces with the GOP to do things that are unconscionable. Both backed GOP efforts to deregulate Wall Street just a few years after Wall Street destroyed the country's economy. Stabenow was instrumental in killing proposed animal welfare rules that her agri-business donors and Trump opposed, and she teamed up with Republicans to dilute GMO labeling laws.