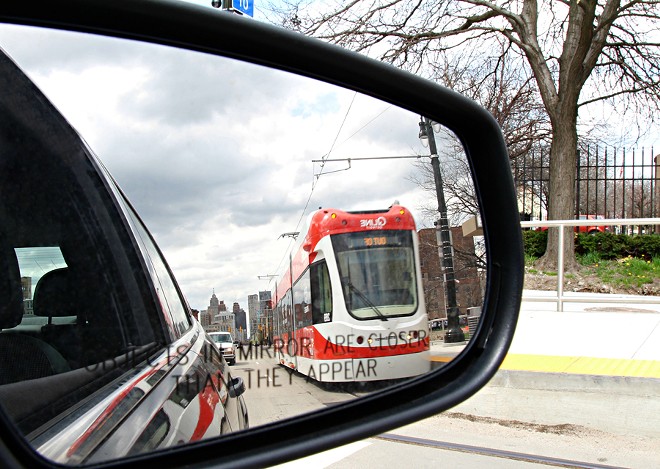 The QLine, Detroit's 3.3-mile long streetcar system, opened to much fanfare exactly a year ago tomorrow. But in its first 365 days, the line has been beset by problems, including low ridership and regular stoppages due to parked cars along the track.

For QLine CEO Matt Cullen, however, the street car's performance merits a solid "B" grade.

Cullen, who is also principal of Dan Gilbert's Rock Ventures, spoke with the Free Press for a story to mark the one-year anniversary of the opening of the street car. He tells the daily his grade is based on a blending of two phases. He gives an "A" to the effort to launch the QLine, and he gives the operational side a "C+" or "B-."

QLine ridership drops 40 percent after implementing fares
By Jack Roskopp
News Hits
According to Bridge magazine, the QLine averaged more than five stoppages per week in its first year — a result of the fact that the street car runs curbside with traffic, as opposed to in its own dedicated lane. The QLine also averaged just 2,700 daily rides from November through March. The QLine operators had previously said daily ridership goals were between 5,000 daily rides, with a goal in five years of attaining 8,000 riders per day. The streetcar also went from being free to $1.50 per pass in September. During the free period, when the weather was warmer and the street car was still a novelty, daily ridership was at 4,300.

Dan Gilbert, private interests steered QLine plans, study finds
By Lee DeVito
News Hits
The QLine has also faced a fair share of criticism in its first year over its purpose as an economic development tool which received a good deal of public money. A report by academics found that it ran curbside against the wishes of the and that the decision was made to ensure the streetcar would produce more foot traffic to help boost businesses along its route. Much of that real estate is of course owned by Dan Gilbert, who helped steer the decision-making process.

The runs from downtown to New Center and does not directly connect to other modes of transportation.

QLine officials have said they are optimistic about the next year of operations, and that some of the kinks of the system are starting to work themselves out. Wait times between rides have decreased, they say, and so have the number of drivers who double park along the tracks.