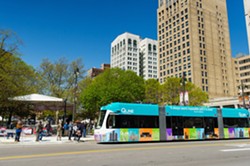 A spokesman for streetcar operator M-1 Rail confirms the Kresge Foundation is funding the extended free ride period. Initially, M-1 Rail offered free rides as a launch weekend promotion when the QLine opened to the public in May. The free rides were extended another week, and then extended again through the month of June, with a $1.50 fare originally expected to go into effect on July 1.

According to M-1 Rail spokesman Dan Lijana, this new round of free ride extensions comes as M-1 Rail tweaks its operating procedures — the QLine's launch has not been without kinks, with users noting long wait times for cars and a buggy predicted wait time system. During this time, Lijana says M-1 Rail will tweak operational procedures, including reducing the amount of time the cars spend charging their batteries, increasing cars and staffs, and rolling out a signal priority system at certain intersections.

"[Kresge] views this as a long-term investment in transit," says Lijana. "While the reception for the QLine has been amazing, it's also clear that there are some operational things that we have to work on, and that's what we're going to spend the next two months working on."

According to Lijana, Kresge's contribution will cover the expected ridership from July 1 through Sept. 4, or an expected $200,000-$300,000. The Kresge Foundation is one of the M-1 Rail nonprofit's major donors, with an investment of $50 million into the $180 million project. The M-1 Rail's board of directors includes Kresge CEO Rapson.

Eventually, M-1 Rail hopes the system would eventually be adopted and expanded by a transit agency like the Regional Transit Authority, a move that would come with matching federal government funds of $60 million. Advocates are pushing for an RTA measure in 2018.