Waxahatchee’s Katie Crutchfield on enlisting Detroit’s Bonny Doon as her new backing band, getting sober, and her new record 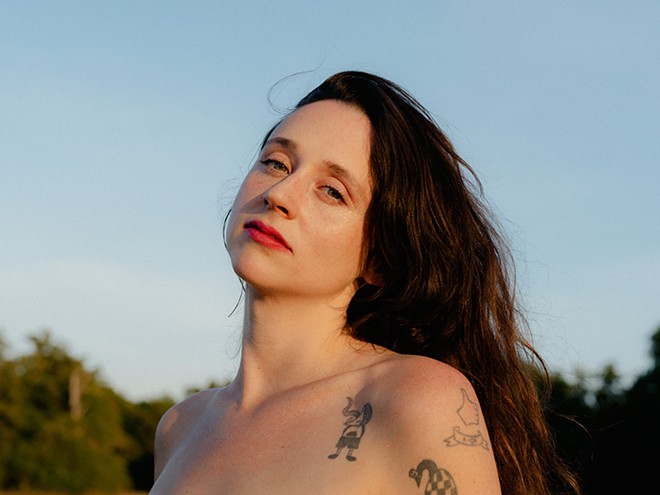 The first thing Katie Crutchfield says during our interview is, “Honestly, when I heard you were calling from Detroit, I thought: ‘Let's just spend the whole interview talking about Bonny Doon!’ I would love to just do that…”

We actually wound up talking to the singer-songwriter, who performs as Waxahatchee, about a lot more than just the band of local musicians she enlisted to record her new album, her fifth, Saint Cloud, which is released Friday.

“I still think it was a surprise when she asked us to be her band,” says Bobby Colombo, co-founder and co-lead songwriter of Bonny Doon. “I met Katie when we played a show together in Detroit in 2012, when she was touring on the first Waxahatchee record. We have always had a lot of mutual friends so we just kind of stayed in each others' orbit and were able to become friends that way.”

Colombo says that Crutchfield reached out to the band “with an idea she wanted to discuss. Later, when she was hosting us in Kansas City while we were on tour, in 2018, she proposed we do a tour as her band… and, if it felt right, make a record!”

Bonny Doon released its sophomore record, Longwave, in the spring of 2018 on the label Woodist, and it definitely made a splash across the national indie-rock scene, as well as with Crutchfield.

Something about the tranquil, traipsing vibe, the hazy-flutter riffs, the summery lilt and zen-like vocal delivery struck more than just a chord with Crutchfield. “It just blew my mind,” she says. “It was my immediate favorite record. I still play it constantly.”

Crutchfield had intended to launch her spring tour to support Saint Cloud right here in Detroit at Jam Handy, but that show, like pretty much everything else right now, has been canceled due to the coronavirus pandemic.


Getting sober and returning to the South

It's been nearly a decade since Crutchfield took on this moniker as a songwriter and recording artist, an homage to Waxahatchee Creek, where she grew up, in Alabama. Her first album, 2012’s American Weekend, hovered near the realm of lo-fi, caustic indie-rock ballads. (Before that, she had been part of a feminist punk band called P.S. Eliot with her twin sister, Allison.) But Waxahatchee songs like "Sparks Fly," from 2017's Out In The Storm, found Crutchfield’s strikingly soulful voice gliding over an arrangement that felt like atmospheric Americana — something closer to country or ambient folk music, intent on maximizing the breathing space for each rich tone to resonate to its fullest furrowing.

Saint Cloud's lead single, “Fire,” leans into the kind of elegance attainable with just the right-amount of minimalism, with Bonny Doon's accompaniment providing tasteful flourishes and restrained, yet arresting rhythmic hooks. Crutchfield's voice on this track is graceful in its slow glide serenade, proffering earnest lyrics contemplating the possibilities of self-love and forgiveness.


Crutchfield says much of the sentiments and revelations shared on the album’s lyrics spring from her decision to get sober in 2018.

“You really can’t talk about the record without talking about how I got sober,” Crutchfield says. “A lot of (Saint Cloud) is reflective — through my recovery. And a lot of it is a return to my past in the South.”

Crutchfield was born in Birmingham, Alabama, but wound up moving to Brooklyn, New York, to Long Island, and eventually Philadelphia, which was commonly regarded as her home base during her rise in acclaim and notoriety as an indie singer-songwriter. While she’s on tour most of the time, her new home is in Kansas City.

“But I moved back to Alabama, briefly,” she says, recalling the creative process for Saint Cloud, “and through that, I was feeling my way into country music and Americana, especially Lucinda Williams, Gillian Welch, Emmylou Harris.”

Williams is perhaps the biggest influence on Saint Cloud.

“Something about her songwriting that I always picked up on and appreciated was how she can really put you in the story, she’s always putting you into these places,” Crutchfield says. “I wanted to tell these stories clearly. And a lot of the settings for this album are in the South — I wanted to put the listener there.”


A sense of place and the 'tortured artist'

Place is prominent in Waxahatchee’s oeuvre: the ideas for “Fire” sparked while Crutchfield was driving into West Memphis, Arkansas, over the Mississippi River. But there are references to Saint Cloud, Florida (where her father is from), Ruby Falls, Tennessee, and even a hybridizing of locations with a song like “Arkadelphia.” But a certain kind of mobility — a passage, a processing of emotions and truths, just like crossing over that bridge — finds heightened profundity through a connection to her sobriety, especially when you are a musical artist that’s constantly on tour.

“I talk a lot about the trope of the tortured artist,” Crutchfield says. “Like, we have to be these insane messes in order to make something or to tell a story that’s worth telling. I’m 100% guilty of that, and that’s very much the mindset I’ve had for a long time. So, through getting sober, and trying to just be mentally and physically healthy, and focus my energy on that, I was definitely trying to prove to myself that I could make my best album yet...”

When Crutchfield decided to get sober close to the start of a new album, she admits to wondering: “How is (getting sober) going to affect me?’ A close friend of mine told me that I wouldn’t even recognize myself after getting sober, and I thought, ‘Well… that’s dramatic...’ But a couple months into it? She was completely right.”

Crutchfield says she’s gotten over that illusion that “torture” is necessary to facilitate great art. “I feel like I can still do this and have it be meaningful and have it be something people can relate to, and still make it dark and sad without making myself the victim,” she says.

“I live such a mobile life up to this point,” Crutchfield says. “We made this record in West Texas (Sonic Ranch Studio), but I wrote a lot of these songs in Alabama, Kansas, and in Michigan, just, all over the middle of America. I left the coast and now I’ve come to the middle.”

That’s right. She worked on a bit of this new album while she was rehearsing with Bonny Doon here in Michigan. “My whole band is from Michigan! The three boys from Bonny Doon, and this woman, Jacki Warren, from (the Grand Rapids-based band) Major Murphy. So I feel this weird kismet-connection to Michigan on this (album) cycle, and I’ve gone to Detroit a bunch and spent time in the city working on music, so I do feel like I have a special kind of access — that I’ve gotten to know Detroit a bit better.”

Colombo, however, recently moved to Northern California. “We’re still doing Bonny Doon full time,” Colombo assures. “We’re working on a new record, which will hopefully be out within the next year.”

“We have a lot of similar influences,” Bonny Doon co-founder Bill Lennox says of Crutchfield. “And we understand each other really well, so when it came time to make (Saint Cloud), we definitely felt like we were on the same page with everything. Katie is a truly amazing songwriter, so we just wanted to do our best to let her songs shine, while adding a bit of our own sound to it.”

Lennox says the experience of working with Crutchfield at Sonic Ranch was the first time they worked with a producer. Brad Cook is a maven of the modern alt-country realm, having worked with Waxahatchee previously, along with bands like Whitney and Hiss Golden Messenger; he’s also worked with indie icons like Mountain Goats and Sharon Van Etten. Along with Cook, Saint Cloud also got a sonic assist from drummer Nick Kinsey, whose past credits include working with singer-songwriter Kevin Morby. “We learned a lot from just from being in the mix,” Lennox says, “and just getting to watch how other people work.”

Waxahatchee recently released a video for the song “Can’t Do Much,” which was the first song she wrote for the new album. The video was filmed at Key Club in Benton Harbor, Michigan, by Anna Powell, featuring Bonny Doon.

On her website, Crutchfield wrote: “It’s a strange time to be alive, and thus, a very strange time to be releasing new music. I hope it brings a little joy into the shadowy void we’re all collectively staring into right now — I hope everyone is staying healthy & safe.”