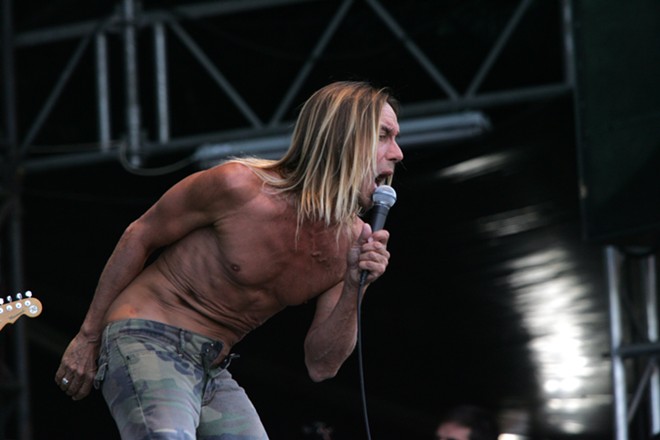 Get ready to smear some peanut butter on your nude torso, folks. The Stooges' Fun House is turning the big 5-0!

The box set includes a trove of recordings, including the vinyl debut of the complete Fun House sessions, as well as a live performance from 1970 at Ungano's in New York City, and alternative mixes of “Down on the Street“/“I Feel Alright.”

Rhino will be releasing the boxset on July 17, which will coincide with a free month-long exhibit at Detroit's Third Man Records that will display Fun House-era photos and other cool talismans and meaningful objects handpicked by the band and their respective estates. Stooges' Dave Alexander, Ron, and Scott Asheton have all died. Iggy Pop, who released his 18th solo record Free last year, will turn 73 in April.

The boxset will run you $399.98 and only 1,970 copies will be made available. The Fun House collection is currently available for pre-order at Store.Rhino.com.

This year marks the 50th anniversary of The Stooges' iconic FUN HOUSE record and we're bringing you an extremely limited, numbered compendium on a whopping 15 LPs! Exclusive to Rhino.com, FUN HOUSE 50TH ANNIVERSARY DELUXE EDITION VINYL BOXED SET is set for a July 17th release - link in bio to pre-order! Featured are a newly remastered 2LP 45 RPM version of the album, the vinyl debut of THE COMPLETE FUNHOUSE SESSIONS, and HAVE SOME FUN: LIVE AT UNGANO'S, a recording of The Stooges performing live in New York City in August 1970, just as FUN HOUSE was released. Rounding out the music in this deluxe set are two mixes of the single “Down On The Street”/“I Feel Alright.” The first is the “Mono Single Edit” released in France, and the other is the unique “Single Mix” that was unreleased until the original 1999 boxed set. Each one is pressed on 7" vinyl and presented in a sleeve with reproduction artwork. The collection also includes a booklet with rare photos and extensive liner notes, featuring an essay by Henry Rollins and testimonials penned by an extensive list of rock ‘n’ roll luminaries including Flea, Joan Jett, Shirley Manson, Duff McKagan, Thurston Moore, Tom Morello, Karen O, Mike Watt, and Steven Van Zandt, among others, plus posters, prints, a slipmat, and a 45 adapter.